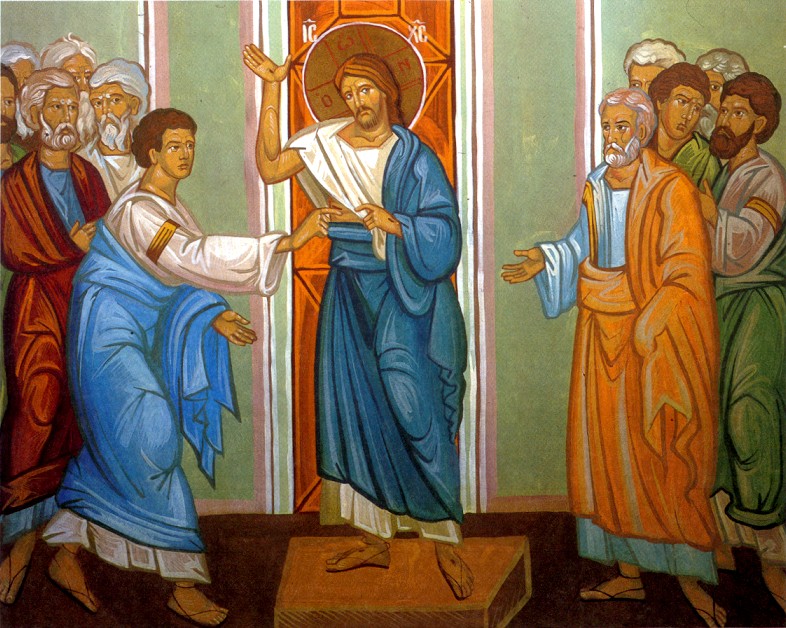 Station at the Church of St. Pancras in Rome. Low Sunday, so called in order to emphasize the contrast between the great Easter solemnity and the Sunday which ends the Octave, is also known as Quasimodo, from the first words of the Introit. (Not the hunchback of Notre Dame!) In the Latin Missal and Breviary it is Called Dominica in Albis (depositis or deponendis), because the Neophytes on that day put aside their white garments. Another Latin name, Pascha clausum, is preserved in the French Paques – “closes” and in the Dutch Beloken Paschen, i.e. “close of Easter,” this day ending the Octave (Collect).

The Church compares the Neophytes to newborn babes, and the milk she gives them to drink (Introit) is the faith in Christ which will enable them to overcome with Him the world. This faith has for its foundation the testimony of the Father, Who at the baptism of Christ (water) declared Him to be His Son; the testimony of the Son, Who on the Cross (blood) showed Himself the Son of God; and that of the Holy Ghost, Who by Christ’s Resurrection attested the divinity of the Redeemer (Gospel).

The Gospel further shows us how Christ, Who twice appeared in the Cenacle, dispelled the doubts of the Apostle – not present in the upper room on Easter night – Saint Thomas and praised those who, without having seen Him, yet believed in Him.

Let us proclaim our faith in the risen Christ, and in the Divine Presence in the Holy Eucharist let us repeat with Thomas that cry of faith and humility, “My Lord and my God!”

Grant us, we beseech Thee, Almighty God, in our hearts and in our manner of life, at all times to keep to Thee an Easter festival such as we have celebrated. Through Jesus Christ our Lord, Who liveth and reigneth with Thee in the unity of the Holy Ghost, one God Forever and ever. R.Amen.

Alleluia, alleluia. V. On the day of My resurrection, saith the Lord, I will go before you into Galilee. Alleluia. V. After eight days, the doors being shut, Jesus stood in the midst of His disciples, and said. Peace be with you. Alleluia.

At that time, when it was late that same day, the first of the week, and the doors were shut, where the disciples were gathered together for fear of the Jews, Jesus came, and stood in the midst and said to them: “Peace be to you.” And when He had said this, He showed them His hands and His side. The disciples therefore were glad, when they saw the Lord. He said therefore to them again: “Peace be to you: as the Father hath sent Me, I also send you.” When He had said this, He breathed on them, and He said to them, “Receive ye the Holy Ghost: whose sins you shall forgive, they are forgiven them, and whose sins you shall retain, they are retained.” Now Thomas, one of the twelve, who is called Didymus, was not with them when Jesus came. The other disciples therefore said to him: We have seen the Lord. But he said to them: Except I shall see in His hands the print of the nails, and put my finger into the place of the nails, and put my hand into His side, I will not believe. And after eight days, again His disciples were within, and Thomas with them. Jesus cometh, the doors being shut, and stood in the midst, and said: “Peace be to you.” Then He saith to Thomas: “Put in thy finger hither, and see My hands, and bring hither thy hand, and put it into My side; and be not faithless, but believing.” Thomas answered, and said to him: My Lord, and my God. Jesus saith to him: “Because thou hast seen Me, Thomas, thou hast believed: blessed are they that have not seen and have believed.” Many other signs also did Jesus in the sight of His disciples which are not written in this book. But these are written, that you may believe that Jesus is the Christ the Son of God; and that, believing, you may have life in His name.

An angel of the Lord descended from Heaven, and said to the women: He whom you seek is risen as He said, alleluia.

Graciously receive, we beseech Thee, O Lord, the gifts offered in this season of gladness, by Holy Church to Thee: and even as Thou makest her so greatly to rejoice on earth, so do Thou call all her children to share in the endless delights of Heaven. Through our Lord Jesus Christ Thy Son our Lord, Who liveth and reigneth with Thee in the unity of the Holy Ghost, one God Forever and ever. R. Amen.

Put in thy hand, and know the place of the nails, alleluia: and be not incredulous, but believing, alleluia, alleluia.

We beseech Thee, O Lord our God, to make profitable to us, both in this world and in that to come, the sacred mysteries by Thee established for the ensuring of our salvation. Through the same Lord Jesus Christ, Thy Son, Who liveth and reigneth with Thee in the unity of the Holy Ghost, one God For ever and ever. R. Amen.