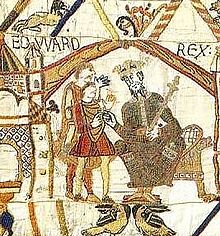 Edward was born in 1003. He was the last Saxon king to rule (for more than a few months) in England. He is called “Edward the Confessor” to distinguish him from another King of England, Edward the Martyr (c962-979), who was assassinated (presumably by someone who wished to place Edward’s younger half-brother on the throne), and who came to be regarded, on doubtful grounds, as a martyr for the faith. In Christian biographies, the term “confessor” is often used to denote someone who has born witness to the faith by his life, but who did not die as a martyr. Edward was the son of King Ethelred the Unready. This does not mean that he was unprepared, but rather that he was stubborn and wilful, and would not accept “rede,” meaning advice or counsel.

Ethelred was followed by several Danish kings of England, during whose rule young Edward and his mother took refuge in Normandy. But the last Danish king named Edward as his successor, and he was crowned in 1042. Opinions on his success as a king vary. Some historians consider him weak and indecisive, and say that his reign paved the way for the Norman Conquest. Others say that his prudent management gave England more than twenty years of peace and prosperity, with freedom from foreign domination, at a time when powerful neighbours might well have dominated a less adroit ruler. He was diligent in public and private worship, generous to the poor, and accessible to subjects who sought redress of grievances.

While in exile, he had vowed to make a pilgrimage to Rome if his family fortunes mended. However, his council told him that it was not expedient for him to be so long out of the country. Accordingly, he spent his pilgrimage money instead on the relief of the poor and the building of Westminster Abbey, which stands today (rebuilt in the thirteenth century) as one of the great churches of England, burial place of her kings and others deemed worthy of special honour.

He died on 5 January 1066, leaving no offspring; and after his death, the throne was claimed by his wife’s brother, Harold the Saxon, and by William, Duke of Normandy. William defeated and slew Harold at the Battle of Hastings (14 October 1066), and thereafter the kings and upper classes of England were Norman-French rather than Anglo-Saxon. Edward is remembered, not on the day of his death, but on the anniversary of the moving (“translation”) of his corpse to a new tomb in Westminster Abbey, a date which is also the anniversary of the eve of the Battle of Hastings, the end of Saxon England.

Sunday XIX Post Pentecost: Sunday’s Gospel presents one of Our Lord’s most mysterious parables: the Parable of the Wedding Feast. Jesus tells of a king who hosts a marriage feast for his son. First he invites “them that were invited”—the high ranking men and women of his kingdom, most likely. But being too busy, they do not come. The king has them killed, and then invites anyone and everyone; he tells his servant to “go…into the highways” and invite all he can find. At the feast, however, is a man who doesn’t have a wedding garment; the king sees him and has him thrown out from the feast.

The first guests are those who put the cares of this world before faith in Jesus Christ. This is the mass of humanity, who set their sights on earthly things rather than heavenly things. Our Lord told us to “Seek ye therefore first the kingdom of God, and his justice, and all these things shall be added unto you” (Mt 6:33). God demands our complete discipleship, and he demands we put Him before all things; we cannot serve both God and mammon (cf. Mt 6:24). Further, this parable is a dire warning for anyone who puts his earthly life before his soul: “when the king had heard of it, he was angry: and sending his armies, he destroyed those murderers and burnt their city” (Mt 22:7). Eternal damnation is the result of those who reject Christ.

Who are those whom the king invites next? They represent the baptized; those who enter into the feast (the Church) and partake of its food (the Eucharist). The imagery that Christ uses to represent the baptized should be humbling to us all: we are just random people on the street; it’s not due to any personal attributes we possess that we are invited. The focus therefore is on the king, who invites us in spite of our nothingness. We don’t deserve entrance into the feast, but the king in his abundant graciousness allows us to enter.

The mouth of the just shall meditate wisdom, and his tongue shall speak judgment: the law of his God is in his heart. (Ps. 36: 1) Be not emulous of evil-doers; nor envy them that work iniquity.  v. Glory be to the Father and to the Son and to the Holy Ghost, as it was in the beginning, is now and ever shall be, world without end. Amen.

O God, Who hast crowned the blessed King Edward, Thy confessor, with the glory of eternity, make us, we beseech Thee, so to venerate him on earth that we may be able to reign with him in Heaven. Through Jesus Christ, thy Son our Lord, Who liveth and reigneth with thee, in the unity of the Holy Ghost, ever one God, world without end. R. Amen.

Commemoration Dominica XIX Post Pentecost
Almighty and merciful God, graciously keep away from us all misfortune, that, unhampered in soul and body, we may perform with peaceful minds the works that are Yours. Through Jesus Christ, thy Son our Lord, Who liveth and reigneth with thee, in the unity of the Holy Ghost, ever one God, world without end. R. Amen.

Lesson from the Book of Wisdom. Blessed is the man that is found without blemish, and that hath not gone after gold, nor put his trust in money nor in treasures. Who is he, and we will praise him? For he hath done wonderful things in his life. Who hath been tried thereby, and made perfect, he shall have glory everlasting: he that could have transgressed, and hath not transgressed, and could do evil things, and hath not done them: therefore are his goods established in the Lord, and all the church of the saints shall declare his alms.

The just man shall flourish like the palm-tree: he shall grow up like the cedar of Libanus in the house of the Lord. V. (Ps. 91: 3) To show forth Thy mercy in the morning, and Thy truth in the night. Alleluia, alleluia. V. (Osee 14: 6) The just shall spring as the lily: and flourish forever before the Lord. Alleluia.

At that time, Jesus said to His disciples: “At that time, Jesus said to His disciples, Let your loins be girt, and lamps burning in your hands, and you yourselves like to men, who wait for their lord, when he shall return from the wedding; that when he cometh and knocketh, they may open to him immediately. Blessed are those servants, whom the Lord when He cometh, shall find watching. Amen, I say to you, that He will gird Himself, and make them sit down to meat, and passing will minister unto them. And if He shall come in the second watch, or come in the third watch, and find them so, blessed are those servants. But this know ye, that if the householder did know at what hour the thief would come, he would surely watch, and would not suffer his house to be broken open. Be ye then also ready; for at what hour you think not, the Son of man will come.”

My truth and My mercy shall be with him: and in my name shall his horn be exalted.

We offer Thee, O Lord, sacrifices of praise in commemoration of Thy saints, by whom we trust to be delivered from evils both present and future. Through Jesus Christ, thy Son our Lord, Who liveth and reigneth with thee, in the unity of the Holy Ghost, ever one God, world without end. R. Amen.

Commemoration Dominica XIX Post Pentecost
Grant, we beseech You, O Lord, that these gifts which we offer in the sight of Your majesty, may be the means of our salvation. Through Jesus Christ, thy Son our Lord, Who liveth and reigneth with thee, in the unity of the Holy Ghost, ever one God, world without end. R. Amen.

Blessed is the servant, whom when the Lord shall come, He shall find watching: Amen I say to you, He shall set him over all his goods.

We, Thy suppliants, who are refreshed with Heavenly food and drink, beseech Thee, O our God, that we may be fortified by the prayers of him in whose commemoration we have par-taken of these gifts. Through Jesus Christ, thy Son our Lord, Who liveth and reigneth with thee, in the unity of the Holy Ghost, ever one God, world without end. R. Amen.

Commemoration Dominica XIX Post Pentecost
May Your healing power, O Lord, mercifully deliver us from our waywardness and make us ever keep Your commandments. Through Jesus Christ, thy Son our Lord, Who liveth and reigneth with thee, in the unity of the Holy Ghost, ever one God, world without end. R. Amen.

At that time, Jesus spoke to the chief priests and the Pharisees in parables, saying, The kingdom of heaven is like a king who made a marriage feast for his son. And he sent his servants to call in those invited to the marriage feast, but they would not come. Again he sent out other servants, saying, ‘Tell those who are invited, behold, I have prepared my dinner; my oxen and fatlings are killed, and everything is ready; come to the marriage feast.’ But they made light of it, and went off, one to his farm, and another to his business; and the rest laid hold of his servants, treated them shamefully, and killed them. But when the king heard of it, he was angry; and he sent his armies, destroyed those murderers, and burnt their city. Then he said to his servants, ‘The marriage feast indeed is ready, but those who were invited were not worthy; go therefore to the crossroads, and invite to the marriage feast whomever you shall find.’ And his servants went out into the roads, and gathered all whom they found, both good and bad; and the marriage feast was filled with guests. Now the king went in to see the guests, and he saw there a man who had not on a wedding garment. And he said to him, ‘Friend, how did you come in here without a wedding garment?’ But he was speechless. Then the king said to the attendants, ‘Bind his hands and feet and cast him forth into the darkness outside, where there will be the weeping and the gnashing of teeth.’ For many are called, but few are chosen.