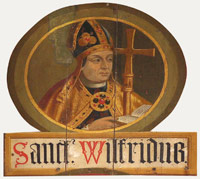 Wilfrid (634-709) is one of the greatest and also one of the most controversial English Saints. He directly influenced the move away from Celtic to the more orderly Roman church practices and is best known for championing and winning the case for the Roman, as opposed to the Celtic method of calculating the date of Easter at the famous Synod of Whitby in 664.

He became Bishop of York with a See covering the whole of Northumbria, built magnificent stone churches at Ripon and Hexham. He acquired vast landholdings and established monasteries in Northumbria, Mercia, Sussex and the Isle of Wight and converted Sussex, the last vestige of paganism, to Christianity.

He was the confidant of kings and queens but made many powerful enemies and was twice banished from Northumbria. He made three journeys on foot and horseback through Europe to Rome and was not afraid to seek papal jurisdiction over both crown and church where he felt badly treated. His life was threatened many times being shipwrecked and nearly killed by natives off the coast of Sussex, imprisoned in Northumbria by the king and twice nearly murdered whilst travelling abroad.

Saint Peter of Alcantara was born in Alcantara, Spain in 1499. His father, Peter Garavita, was the governor of the province, and his mother was of the noble family of Sanabia. After a course of grammar and philosophy in his native town, he was sent, at the age of fourteen, to the University of Salamanca. Returning home, he became a Franciscan in the convent of the Stricter Observance at Manxaretes in 1515.

At the age of twenty-two he was sent to found a new community of the Stricter Observance at Badajoz. He was ordained priest in 1524, and the following year made guardian of the convent of St. Mary of the Angels at Robredillo. A few years later he began preaching with much success. He preferred to preach to the poor; and his sermons, taken largely from the Prophets and Sapiential Books, breathe the tenderest human sympathy. The reform of the “Discalced Friars” had, at the time when Peter entered the order, besides the convents in Spain, the Custody of St. Maria Pietatis in Portugal, subject to the General of the Observants.

Having been elected minister of St. Gabriel’s province in 1538, Peter set to work at once. At the chapter of Plasencia in 1540 he drew up the Constitutions of the Stricter Observants, but his severe ideas met with such opposition that he renounced the office of provincial and retired with John of Avila into the mountains of Arabida, Portugal, where he joined Father Martin a Santa Maria in his life of eremitical solitude. Soon, however, other friars came to join him, and several little communities were established. Peter being chosen guardian and master of novices at the convent of Pallais. In 1560 these communities were erected into the Province of Arabida.

Returning to Spain in 1553 he spent two more years in solitude, and then journeyed barefoot to Rome, and obtained permission of Pope Julius III to found some poor convents in Spain under the jurisdiction of the general of the Conventuals. Convents were established at Pedrosa, Plasencia, and elsewhere; in 1556 they were made a commissariat, with Peter as superior, and in 1561, a province under the title of St. Joseph. Not discouraged by the opposition and ill-success his efforts at reform had met with in St. Gabriel’s province, Peter drew up the constitutions of the new province with even greater severity. The reform spread rapidly into other provinces of Spain and Portugal.

Let Thy priests, O Lord, be clothed with justice, and let Thy saints rejoice: for Thy servant David’s sake, turn not away the face of Thy anointed. Alleluia, alleluia. V. O Lord, remember David, and all his meekness. v. Glory be to the Father and to the Son and to the Holy Ghost, as it was in the beginning, is now and ever shall be, world without end. Amen. Repeat Let Thy priests…

O God, who by reason of the singular merits of thy blessed Bishop Saint Wilfrid, didst cause to shine forth in him many wondrous works, we beseech thee, mercifully to grant, that like as we have learnt from his teaching to seek earnestly after all things heavenly, so we may at all times be defended by his intercession. Through Jesus Christ, thy Son our Lord, Who liveth and reigneth with thee, in the unity of the Holy Ghost, ever one God, world without end. R. Amen.

For the Octave of S. Edward, King & Confessor
O God, Who hast crowned the blessed King Edward, Thy confessor, with the glory of eternity, make us, we beseech Thee, so to venerate him on earth that we may be able to reign with him in Heaven.

For St Peter Alcantara, Confessor
God, Who didst vouchsafe to make blessed Peter, Thy confessor, glorious by the gift of a wonderful spirit of penance and most lofty contemplation, grant us, we beseech Thee, that, through his interceding merits, being mortified in the flesh, we may the more easily understand the things of Heaven. Through Our Lord Jesus Christ Who livest and reignest with Thee in the unity of the Holy Ghost, one God Forever and ever. R.Amen.

Brethren, of other priests there was a succession. Since death denied them permanence; whereas, Jesus continues forever, and his priestly office is unchanging; that is why He can give eternal salvation to those who through Him make their way to God, He lives on still to make intercession on our behalf. Such was the high priest that suited our need, holy and guiltless and undefiled, not reckoned among us as sinners, lifted high above all the heavens; one who has no need to do as those other priests did, offering a twofold sacrifice day by day, first for his own sins, then for those of the people. What He has done, He has done once for all: and the offering was Himself, our Lord Jesus Christ.

Here was a great high priest whose life was acceptable to God V. Where shall we find another to keep the law of the Most High as he kept it? Alleluia, alleluia. V. Ecclus 45:9 The Lord loved him well and ennobled him: He clothed him about with a robe of honour. Alleluia.

At that time, Jesus said to His disciples, “Watch ye, because you know not what hour your Lord will come. but this know ye, that , if the good man of the house knew at what hour the thief would come, he would certainly watch, and would not suffer his house to be broken open. Wherefore be you also ready: because at what hour you know not the Son of Man will come. Who, thinkest thou, is a faithful and wise servant, whom his lord hath appointed over his family, to give them meat in season? Blessed is that servant, whom when his lord shall come he shall find so doing. Amen I say to you, he shall place him over all his goods.”

My truth and My mercy shall be with him: and in My name shall his horn be exalted.

We offer sacrifice unto Thee, O Lord, on the solemnity of blessed Wilfrid, Thy bishop and confessor, humbly beseeching that the sheep which have gone astray may return to the one fold and be nourished with this food of salvation. Through Jesus Christ, thy Son our Lord, Who liveth and reigneth with thee, in the unity of the Holy Ghost, ever one God, world without end. R. Amen.

For the Octave of S. Edward, King & Confessor
We offer Thee, O Lord, sacrifices of praise in commemoration of Thy saints, by whom we trust to be delivered from evils both present and future.

For St Peter Alcantara, Confessor
Grant us, we beseech Thee, O almighty God, that the offering of our lowliness may be pleasing to Thee in honor of Thy saints, and purify us in both body and mind. Through Our Lord Jesus Christ Thy Son, Who liveth and reigneth with Thee in the unity of the Holy Ghost, one God Forever and ever. R.Amen.

Refreshed with the victim of salvation, we supplicate Thee, O Lord, that, through the intercessory patronage of blessed Wilfrid, it may always and everywhere be offered to Thy name. Through Jesus Christ, thy Son our Lord, Who liveth and reigneth with thee, in the unity of the Holy Ghost, ever one God, world without end. R. Amen.

For the Octave of S. Edward, King & Confessor
We, Thy suppliants, who are refreshed with Heavenly food and drink, beseech Thee, O our God, that we may be fortified by the prayers of him in whose commemoration we have par-taken of these gifts. Through Jesus Christ, thy Son our Lord, Who liveth and reigneth with thee, in the unity of the Holy Ghost, ever one God, world without end. R. Amen.

For St Peter Alcantara, Confessor
Grant, we beseech Thee, O Lord, our God, that by the intercession of those on whose feast the mysteries are offered, they may be made efficacious for our salvation. Through our Lord Jesus Christ, Who livest and reignest, with God the Father, in the unity of the Holy Ghost, one God For ever and ever. R. Amen.