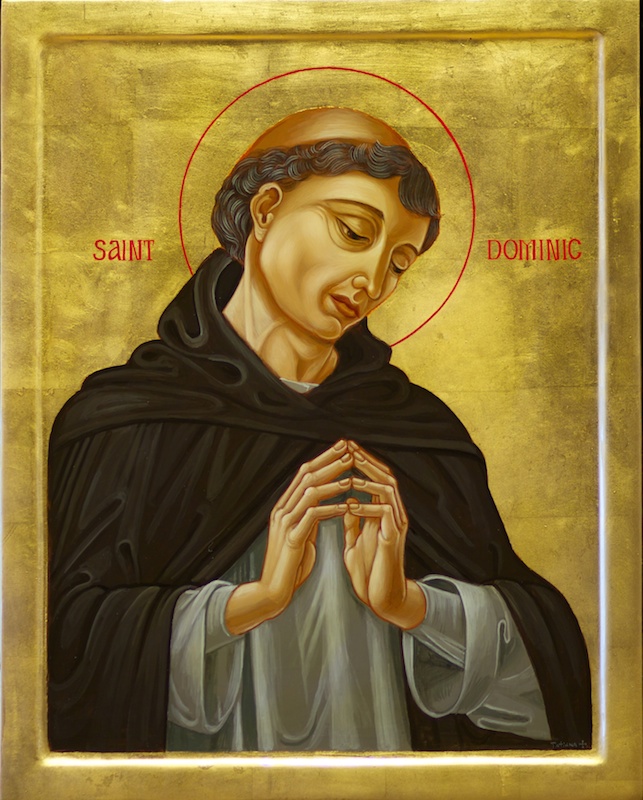 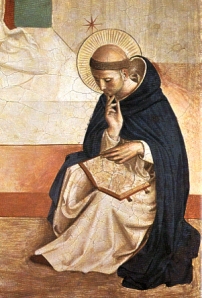 The Church of France was ravaged by the heresy of the Albigenses who, not satisfied with teaching false doctrine, pillaged the churches and massacred the priests. In 1215, Innocent III saw in a dream the tottering walls of St. John Lateran, held up by the powerful shoulders of a friar. This friar was St. Dominic whose preaching defended Catholic doctrine against the new heresies (Epistle). Before his birth, his mother had in a vision her child in the shape of a little dog holding in its mouth a torch which was to set the world on fire.

Called Dominic, because his parents attributed his birth to the prayers of the holy Benedictine abbot Dominic of Silos, he truly belonged to the Lord, as his name suggests. Born in Spain, of the noble family Gusman, he distinguished himself by his purity as is signified by the lily he holds (Alleluia) and his white habit.

Having witnessed the many evils caused by the heretics in the south of France, he founded to oppose them the Order of the Friars Preachers (Communion), whom he armed with the shield of truth to teach doctrine and the sword of the word to preach it.

The Dominicans number many saints of both sexes who, like their founder, ardently studied the Word of God in the Gospel, which as St. Dominic says is the book of truth and “the book of charity”. This saint loved our Lady in a special manner and preached the devotion to the Rosary. He died on August 6, 1221.

The mouth of the just man tells of wisdom, and his tongue utters what is right. The law of his God is in his heart. Ps 36:1 Be not vexed over evildoers, nor jealous of those who do wrong. V. Glory be to the Father…

O God, Who graciously enlightened Your Church by the good works and teaching of St. Dominic, Your Confessor, grant by his intercession, that she may never be deprived of temporal helps and may ever advance in spiritual growth. Through Jesus Christ, thy Son our Lord, Who liveth and reigneth with thee, in the unity of the Holy Ghost, ever one God, world without end. R. Amen.

Commemoratio Dominica VIII Post Pentecosten I. Augusti
Ever graciously bestow upon us, we beseech You, O Lord, the spirit of thinking and doing what is right, so that we, who cannot exist without You, may have the strength to live in accordance with Your law. Through Jesus Christ, thy Son our Lord, Who liveth and reigneth with thee, in the unity of the Holy Ghost, ever one God, world without end. R. Amen.

Lesson from the secons letter of St Paul the Apostle to Timotheus: Beloved: I charge you, in the sight of God and Christ Jesus, Who will judge the living and the dead by His coming and by His kingdom, preach the word, be urgent in season, out of season; reprove, entreat, rebuke with all patience and teaching. For there will come a time when they will not endure the sound doctrine; but having itching ears, will heap up to themselves teachers according to their own lusts, and they will turn away their hearing from the truth and turn aside rather to fables. But be watchful in all things, bear with tribulation patiently, work as a preacher of the Gospel, fulfill your ministry. As for me, I am already being poured out in sacrifice, and the time of my deliverance is at hand. I have fought the good fight, I have finished the course, I have kept the faith. For the rest, there is laid up for me a crown of justice, which the Lord, the just Judge, will give to me in that day; yet not to me only, but also to those who love His coming.

The just man shall flourish like the palm tree, like a cedar of Lebanon shall he grow in the house of the Lord. Ps 91:3 V. To proclaim Your kindness at dawn and Your faithfulness throughout the night. Alleluia, alleluia. Osee 14:6 V. The just shall blossom like the lily; and flourish forever before the Lord. Alleluia.

At that time, Jesus said to His disciples, Let your loins be girt about and your lamps burning, and you yourselves like men waiting for their master’s return from the wedding; so that when he comes and knocks, they may straightway open to him. Blessed are those servants whom the master, on his return, shall find watching. Amen I say to you, he will gird himself, and will make them recline at table, and will come and serve them. And if he comes in the second watch, and if in the third, and finds them so, blessed are those servants! But of this be assured, that if the householder had known at what hour the thief was coming, he would certainly have watched, and not have let his house be broken into. You also must be ready, because at an hour that you do not expect, the Son of Man is coming.

My faithfulness and My kindness shall be with him, and through My name shall his horn be exalted.

Sanctify, O Lord, the gifts dedicated to You, that by the merits of St. Dominic, Your Confessor, they may obtain a healing remedy for us. Through Jesus Christ, thy Son our Lord, Who liveth and reigneth with thee, in the unity of the Holy Ghost, ever one God, world without end. R. Amen.

Commemoratio Dominica VIII Post Pentecosten I. Augusti
Accept, we beseech You, O Lord, the gifts which we bring to You out of Your own bounty, so that these most holy sacramental rites may, by the power of Your grace, sanctify us in the conduct of our present life, and lead us to everlasting joy. Through Jesus Christ, thy Son our Lord, Who liveth and reigneth with thee, in the unity of the Holy Ghost, ever one God, world without end. R. Amen.

PREFACE of the Blessed Trinity

It is truly meet and just, right and for our salvation, that we should at all times, and in all places, give thanks unto Thee, O holy Lord, Father almighty, everlasting God. Who, together with Thine only-begotten Son, and the Holy Ghost, art one God, one Lord: not in the oneness of a single Person, but in the Trinity of one Substance. For what we believe by Thy revelation of Thy glory, the same do we believe of Thy Son, the same of the Holy Ghost, without difference or separation. So that in confessing the true and everlasting Godhead, distinction in persons, unity in essence, and equality in majesty may be adored. Which the angels and archangels, the cherubim also and seraphim do praise: who cease not daily to cry out, with one voice saying:

Grant, we beseech You, almighty God, that we who are heavy laden by the weight of our sins may be sustained by the spiritual help of St. Dominic, Your Confessor. Through Jesus Christ, thy Son our Lord, Who liveth and reigneth with thee, in the unity of the Holy Ghost, ever one God, world without end. R. Amen.

Commemoratio Dominica VIII Post Pentecosten I. Augusti
May the heavenly sacrament, O Lord, renew our minds and bodies, so that we may feel the benefit of the worship we perform. Through Jesus Christ, thy Son our Lord, Who liveth and reigneth with thee, in the unity of the Holy Ghost, ever one God, world without end. R. Amen.

At that time, Jesus spoke to His disciples this parable: There was a certain rich man who had a steward, who was reported to him as squandering his possessions. And he called him and said to him, ‘What is this that I hear of you? Make an accounting of your stewardship, for you can be steward no longer.’ And the steward said within himself, ‘What shall I do, seeing that my master is taking away the stewardship from me? To dig I am not able; to beg I am ashamed. I know what I shall do, that when I am removed from my stewardship they may receive me into their houses.’ And he summoned each of his master’s debtors and said to the first, ‘How much do you owe my master?’ And he said, ‘A hundred jars of oil.’ He said to him, ‘Take your bond and sit down at once and write fifty.’ Then he said to another, ‘How much do you owe?’ He said, ‘A hundred kors of wheat.’ He said to him, ‘Take your bond and write eighty.’ And the master commended the unjust steward, in that he had acted prudently; for the children of this world, in relation to their own generation, are more prudent than the children of the light. And I say to you, make friends for yourselves with the mammon of wickedness, so that when you fail they may receive you into the everlasting dwellings.
R. Thanks be to God.