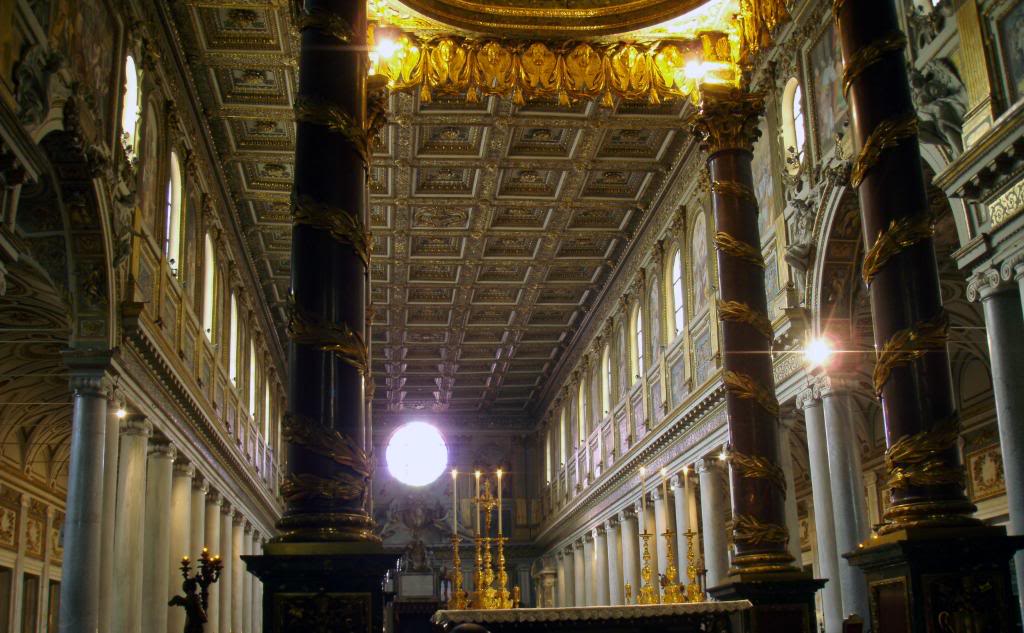 Feast of the Dedication of the Archbasilica of Our Saviour – the Lateran; Commemoration of St Theodore the Recruit, Martyr: Missa “Terribilis est”

As one of the four principle basilicas of Rome and one of the seven pilgrim churches, Rome’s Cathedral of St. John, the Basilica of Our Divine Savior is dedicated to both St. John the Baptist and St. John the Evangelist. Its name is Basilica di San Giovanni in Laterano in Italian, and it was originally built by Constantine the Great in the fourth century as the first Christian church built in the city. The “Lateran” in the name refers to the site, which once was the location of the Laterani family palace which originally had been an ancient palace, part of his wife Fausta’s dowry.

This is the oldest, and ranks first among the four great “patriarchal” basilicas of Rome. The site was, in ancient times, occupied by the palace of the family of the Laterani. A member of this family, P. Sextius Lateranus, was the first plebian to attain the rank of consul. In the time of Nero, another member of the family, Plautius Lateranus, at the time consul designatus was accused of conspiracy against the emperor, and his goods were confiscated. Juvenal mentions the palace, and speaks of it as being of some magnificence, “regiæ ædes Lateranorum”. Some few remains of the original buildings may still be traced in the city walls outside the Gate of St. John, and a large hall decorated with paintings was uncovered in the eighteenth century within the basilica itself, behind the Lancellotti Chapel.

It was dedicated to the Saviour, “Basilica Salvatoris”, the dedication to St. John being of later date, and due to a Benedictine monastery of St. John the Baptist and St. John the Evangelist which adjoined the basilica and where members were charged at one period with the duty of maintaining the services in the church.

There is also a commemoration in today’s Mass for St. Theodore, Martyr. He was a soldier martyr, and suffered death at Amasea in Asia Minor in 306. After being tortured by having his flesh torn by iron hooks, be was burned. During his martyrdom he sang the verse of the Psalm: “I will bless the Lord at all times.” At an early date a round church was built in his honor at Rome; pious women still carry their sick children thither in order to invoke the help of the great martyr.

Terrible is this place: it is the house of God, and the gate of heaven; and shall be called the court of God. (Ps. 83: 2, 3) How lovely are Thy tabernacles, O Lord of hosts! my soul longeth and fainteth for the courts of the Lord. v. Glory be to the Father and to the Son and to the Holy Ghost, as it was in the beginning, is now and ever shall be, world without end. Amen.

God, Who year by year dost renew the day of the consecration of this Thy holy temple, and dost ever bring us again in safety to the holy mysteries,hear the prayers of Thy people, and grant that whosoever entereth this temple to seek blessings may rejoice to obtain all that he seeketh. Through Jesus Christ, thy Son our Lord, Who liveth and reigneth with thee, in the unity of the Holy Ghost, ever one God, world without end. R. Amen.

For ST. THEODORE
O God, Who surround and protect us with the glorious profession of blessed Theodore, Your Martyr, grant us to profit by imitating him and to rejoice in his intercession. Through Jesus Christ, thy Son our Lord, Who liveth and reigneth with thee, in the unity of the Holy Ghost, ever one God, world without end. R. Amen.

Lesson from the Book of the Apocalypse of blessed John the Apostle. In those days, I saw the holy city, the new Jerusalem, coming down out of Heaven,from God, prepared as a bride adorned for her husband. And I heard a great voice from the throne, saying, Behold the tabernacle of God with men; and He will dwell with them: and they shall be His people, and God Himself with them shall be their God: and God shall wipe away all tears from their eyes; and death shall be no more, nor mourning, nor crying, nor sorrow shall be any more, for the former things are passed away. And He that sat on the throne said, Behold, I make all things new.

This place was made by God a priceless mystery, it is without reproof. V. O God, before Whom stands the choir of angels, hear the prayers of Thy servants. Alleluia, alleluia. V. (Ps. 137: 2) I will worship toward Thy holy temple; and I will give glory to Thy name. Alleluia.

At that time, Jesus entering in, walked through Jericho. And behold there was a man named Zachæus, who was the chief of the publicans, and he was rich; and he sought to see Jesus Who He was, and he could not for the crowd, because he was of low stature. And running before, he climbed up into a sycamore-tree that he might see Him, for He was to pass that way. And when Jesus was come to the place, looking up, He saw him, and said to him, “Zachæus, make haste and come down, for this day I must abide in thy house.” And he made haste and came down, and received Him with joy. And when all saw it, they murmured, saying that He was gone to be a guest with a man that was a sinner. But Zachæus standing, said to the Lord, Behold, Lord, the half of my goods I give to the poor, and if I have wronged any man of anything, I restore him fourfold. Jesus said to him, “This day is salvation come to this house; because he also is a son of Abraham. For the Son of man is come to seek and to save that which was lost.”

O Lord God, in the simplicity of my heart, I have joyfully offered all these things; and I have seen with great joy Thy people, which are present: O God of Israel, keep this will. Alleluia.

Bow down to our prayers, O Lord, we beseech Thee that, while we pay our vows here below, we may, by Thine assistance, be worthy to attain unto everlasting rewards.  Through Jesus Christ, thy Son our Lord, Who liveth and reigneth with thee, in the unity of the Holy Ghost, ever one God, world without end. R. Amen.

Commemoration of St. Theodore the Recruit, Martyr
Receive, O Lord, the prayers of the faithful with offerings of sacrifices,and, by the intercession of blessed Theodore, Thy martyr, may we pass through these offices of pious devotion to heavenly glory. Through Our Lord Jesus Christ: Who liveth and reigneth with Thee in the unity of the same Holy Ghost, one God Forever and ever.
R.Amen.

PREFACE of the Most Holy Trinity

It is truly meet and just, right and for our salvation, that we should at all times and in all places, give thanks unto Thee, O holy Lord, Father almighty, ever-lasting God: Who, together with Thine only-begotten Son, and the Holy Ghost, are one God, one Lord: not in the oneness of a single Person, but in the Trinity of one substance. For what we believe by Thy revelation of Thy glory, the same do we believe of Thy Son, the same of the Holy Ghost, without difference or separation. So that in confessing the true and everlasting Godhead, distinction in persons, unity in essence, and equality in majesty may be adored. Which the Angels and Archangels, the Cherubim also and Seraphim do praise: who cease not daily to cry out with one voice saying:

My house shall be called the house of prayer, saith the Lord: every one that asks therein, receives; and he who seeks, finds; and to him who knocks, it shall be opened.

O God, Who from living and chosen stones dost prepare for Thy majesty an eternal dwelling, help Thy people who call upon Thee, so that what is profitable to Thy Church in material growth may be accompanied with an increase of that which is of the spirit. Through Jesus Christ, thy Son our Lord, Who liveth and reigneth with thee, in the unity of the Holy Ghost, ever one God, world without end. R. Amen.

Commemoration of St. Theodore the Recruit, Martyr
Grant us, we beseech Thee, O Lord, by the intercession of blessed Theodore,Thy martyr, that what we touch with our lips we may receive with pure hearts. Through Our Lord Jesus Christ: Who liveth and reigneth with Thee in the unity of the same Holy Ghost, one God Forever and ever. R.Amen.