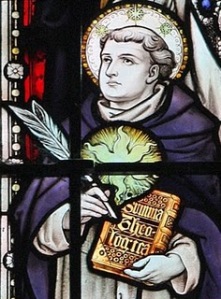 St. Thomas Aquinas, priest and doctor of the Church, patron of all universities and of students. He was born toward the end of the year 1226. He was the son of Landulph, Count of Aquino, who, when St. Thomas was five years old, placed him under the care of the Benedictines of Monte Casino. His teachers were surprised at the progress he made, for he surpassed all his fellow pupils in learning as well as in the practice of virtue.

When he became of age to choose his state of life, St. Thomas renounced the things of this world and resolved to enter the Order of St. Dominic in spite of the opposition of his family. In 1243, at the age of seventeen, he joined the Dominicans of Naples. Some members of his family resorted to all manner of means over a two year period to break his constancy. They even went so far as to send an impure woman to tempt him. But all their efforts were in vain and St. Thomas persevered in his vocation. As a reward for his fidelity, God conferred upon him the gift of perfect chastity, which has merited for him the title of the “Angelic Doctor”.

After making his profession at Naples, he studied at Cologne under the celebrated St. Albert the Great. Here he was nicknamed the “dumb ox” because of his silent ways and huge size, but he was really a brilliant student. At the age of twenty-two, he was appointed to teach in the same city. At the same time, he also began to publish his first works. After four years he was sent to Paris. The saint was then a priest. At the age of thirty-one, he received his doctorate.

At Paris he was honored with the friendship of the King, St. Louis, with whom he frequently dined. In 1261, Urban IV called him to Rome where he was appointed to teach, but he positively declined to accept any ecclesiastical dignity. St. Thomas not only wrote (his writings filled twenty hefty tomes characterized by brilliance of thought and lucidity of language), but he preached often and with greatest fruit. Clement IV offered him the archbishopric of Naples which he also refused. He left the great monument of his learning, the “Summa Theologica”, unfinished, for on his way to the second Council of Lyons, ordered there by Gregory X, he fell sick and died at the Cistercian monastery of Fossa Nuova in 1274.

St. Thomas was one of the greatest and most influential theologians of all time. He was canonized in 1323 and declared Doctor of the Church by Pope Pius V.

In the midst of the Church the Lord opened his mouth: and filled him with the spirit of wisdom and understanding: He clothed him with a robe of glory.. (Ps. 91: 2) It is good to give praise to the Lord: and to sing to Thy Name, O Most High. v. Glory be…etc

O God, who seest that we have no power whatever from ourselves; keep us both outwardly n our bodies and inwardly in our souls; that we may be defended from all adversities which may happen to the body and from all evil thoughts which may hurt the soul.  Through our Lord Jesus Christ, Thy Son, Who liveth and reigneth with Thee in the unity of the Holy Ghost, God, Forever and ever.

Commemoratio Ss. Perpetuae et Felicitatis Martyrum
Grant, we beseech You, O Lord our God, that we may venerate with unceasing devotion Your holy Martyrs Perpetua and Felicitas; and although we cannot pay them the honor that is their due, may we at least present to them our humble homage.

Feria Quinta infra Hebdomadam III in Quadragesima
May the blessed feast of Your saints, Cosmas and Damian, glorify You, O Lord; for on this day in Your marvelous providence, You gave them glory everlasting, and gave us their help. Through Jesus Christ, thy Son our Lord, Who liveth and reigneth with thee, in the unity of the Holy Ghost, ever one God, world without end.
R. Amen.

Lesson from the Book of Wisdom. I wished, and understanding was given me; and I called, and the spirit of wisdom came upon me; and I preferred here before kingdoms and thrones, and esteemed riches, nothing in comparison of her. Neither did I compare unto her any precious stone, for all gold in comparison of her is as a little sand, and silver in respect to her shall be counted as clay. I loved her above health and beauty, and chose to have her instead of light, for her light cannot be put out. Now all good things came to me together with her, and innumerable riches through her hands. And I rejoiced in them all: for this wisdom went before me, and I knew not that she was the mother of them all: which I have learned without guile, and communicate without envy and her riches I hide not; for she is an infinite treasure to men: which they that use, become the friends of God, being commended for the gift of discipline.

The mouth of the just man shall meditate wisdom, and his tongue shall speak judgment. V. The law of his God is in his heart; and his steps shall not be supplanted.

Blessed is the man that feareth the Lord: he delights exceedingly in His commandments. V. His seed shall be mighty upon the earth: the generation of the righteous shall be blessed. V. Glory and wealth shall be in his house: and his justice remaineth for ever and ever.

At that time, Jesus said to His disciples,”You are the salt of the earth: but if the salt lose its savor, wherewith shall it be salted? It is good for nothing any more but to be cast out, and to be trodden by men. You are the light of the world. A city seated on a mountain can not be hid. Neither do men light a candle and put it under a bushel, but upon a candlestick, that it may shine to all that are in the house; so let your light shine before men, that they may see your good works, and glorify your Father Who is in Heaven. Do not think that I am come to destroy the law or the prophets: I am not come to destroy, but to fulfill. For, amen I say unto you, till Heaven and earth pass, one jot or one tittle shall not pass of the law till all be fulfilled. He therefore that shall break one of these least commandments, and shall so teach men, shall be called the least in the kingdom of Heaven: but he that shall do and teach, he shall be called great in the kingdom of Heaven.”

The just shall flourish like the palm tree: he shall be multiplied like the cedar that is in Libanus.

May the pious prayer of holy Thomas thy Confessor and illustrious Doctor be not wanting to us, O Lord, but make our offerings acceptable to thee and ever win for us thy mercy. Through our Lord Jesus Christ Thy Son our Lord, Who liveth and reigneth with Thee in the unity of the Holy Ghost, one God Forever and ever.

Commemoratio Ss. Perpetuae et Felicitatis Martyrum
Look with favor, we beseech You, O Lord, upon the gifts placed on Your altar for the feast-day of Your holy Virgin-Martyrs Perpetua and Felicitas, and as You glorified them, lavish upon us Your forgiveness by these sacred rites.

Feria Quinta infra Hebdomadam III in Quadragesima
We offer You, O Lord, in honor of the meritorious death of Your just ones, this sacrifice which is the source of martyrdom. Through Jesus Christ, thy Son our Lord, Who liveth and reigneth with thee, in the unity of the Holy Ghost, ever one God, world without end. R. Amen.

A faithful and wise steward, whom the Lord set over His family; to give them their measure of wheat in due season.

May blessed Thomas thy Confessor and illustrious Doctor intercede for us, O Lord, that this thy sacrifice may obtain for us salvation.Through the Lord Jesus Christ, Thy Son, Who liveth and reigneth with Thee in the unity of the Holy Ghost, one God For ever and ever.

Commemoratio Ss. Perpetuae et Felicitatis Martyrum
You have filled us with spiritual joy and delight; grant, we beseech You, O Lord, that by the intercession of Your holy Martyrs Perpetua and Felicitas, we may spiritually attain what now we ritually perform.

Feria Quinta infra Hebdomadam III in Quadragesima
May the blessed feast of Your saints, Cosmas and Damian, glorify You, O Lord; for on this day in Your marvelous providence, You gave them glory everlasting, and gave us their help. Through Jesus Christ, thy Son our Lord, Who liveth and reigneth with thee, in the unity of the Holy Ghost, ever one God, world without end.
R. Amen.

At that time, Jesus rose from the synagogue and entered Simon’s house. Now Simon’s mother-in-law was suffering from a great fever, and they besought Him for her. And standing over her He rebuked the fever, and it left her; and she rose at once and began to wait on them. Now when the sun was setting, all who had persons sick with various diseases brought them to Him. And He laid His hands upon each of them and cured them. And devils also came forth from many, crying out and saying, You are the Son of God. And He rebuked them, and did not permit them to speak, because they knew that He was the Christ. Now when it was day, He went out and departed into a desert place. And the crowds were seeking after Him, and they came to Him, and tried to detain Him, that He might not depart from them. But He said to them, To the other towns also I must proclaim the kingdom of God, for this is why I have been sent. And He was preaching in the synagogues of Galilee.