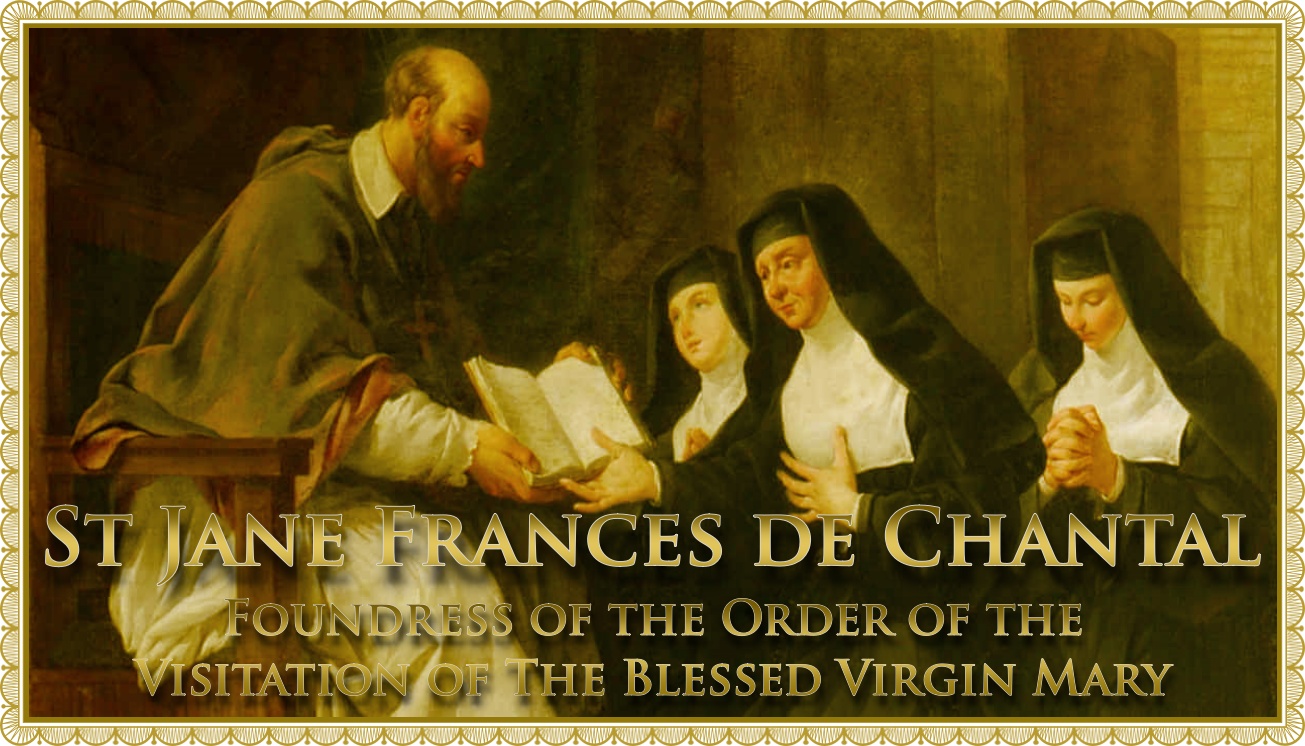 Saint Jane Frances de Chantal was born in Dijon, France in 1572, the daughter of Benigne Fremyot, president of the parliament in Burgundy, and married at twenty to Baron Christopher de Chantal who died in 1601. Nobility and riches were there for the asking for Jane Fances, but she used them wisely for the honor and glory of God. After nine years of marriage and seven children, Jane became a widow when her husband was killed in a hunting accident. Three years later she was touched in the deepest way by a sermon of Saint Francis de Sales for it was he who she had seen in a previous vision and because of this spiritual experience, persuaded him to be her spiritual director. After securing stability for her children, she turned to religious life. Though she had a strong desire to become a Carmelite nun, Francis realized her mission lay elsewhere and through his wise counsel she, along with three other women Charlotte de Brechard, Anne Coste, and Mary Favre began the Congregation of the Visitation, dedicated to helping young girls and widows consider a traditional, contemplative religious life. Satan did all in his power to discredit this fledgling order and dissuade Jane from her appointed mission by tormenting her soul greatly but God’s Will won out and the Order spread throughout France and beyond over the next three decades. Jane died on December 13 at Moulins shortly after a meeting with Queen Anne in Paris. She was buried by Lake Annecy near her dear spiritual director Francis, who had passed away nineteen years earlier. Jane was canonized by Pope Clement XIII in 1767.

I know, O Lord, that Thy judgments are equity, and in Thy truth Thou hast humbled me : pierce Thou my flesh with Thy fear, I am afraid of Thy judgments. (Psalm 118) Blessed are the undefiled in the way : who walk in the law of the Lord. v. Glory be to the Father and to the Son and to the Holy Ghost, as it was in the beginning, is now and ever shall be, world without end. Amen. Repeat… I know, O Lord…

Almighty and merciful God, Who didst endow blessed Jane Frances, burning with love of Thee, with an admirable strength of soul through all the paths of life in the way of perfection, and Who wast pleased to glorify Thy Church with a new family by her means, grant to her merits and prayers that we, who, conscious of our own infirmity, trust in Thy power, may, by the assistance of divine grace, conquer all obstacles which beset us. Through our Lord Jesus Christ, Thy Son, Who liveth and reigneth with Thee in the unity of the Holy Ghost, one God Forever and ever. R.Amen.

Commemoration of the Octave of the Dormition
O God who dost manifest Thine power almighty most chiefly in sparing and showing mercy: multiply upon us Thy mercy: that as we hasten towards Thy promises, Thou mayest make us partakers of the heavenly treasures. Who livest and reignest, with God the Father, in the unity of the Holy Ghost, God, Forever and ever.  R. Amen.

Lesson from the Epistle of blessed Paul the Apostle to Timothy. Dearly beloved: Honor widows, that are widows indeed. But if any widow have children, or grandchildren, let her learn first to govern her own house, and to make a return of duty to her parents: for this is acceptable before God. But she that is a widow indeed and desolate, let her trust in God, and continue in prayers and supplications night and day. For she that liveth in pleasures, is dead while she is living. And this give in charge, that they may be blameless. But if any man have not care of his own, and especially of those of his house, he hath denied the faith, and is worse than an infidel. Let a widow be chosen of no less than threescore years of age, who hath been the wife of one husband, having testimony for her good works, if she have brought up children, if she have received to harbor, if she have washed the saints’ feet, if she have ministered to them that suffer tribulation, íf she have diligently followed every good work.

Grace is poured abroad in thy lips: therefore hath God blessed thee for ever. V. Because of truth, and meekness, and justice: and thy right hand shall conduct thee wonderfully. Alleluia, alleluia. V. (Ps. 44: 5) With thy comeliness, and thy beauty, set out, proceed prosperously, and reign. Alleluia.

At that time, Jesus went into a city called Naim: and there went with Him His disciples, and a great multitude. And when He came nigh to the gate of the city, behold a dead man was carried out, the only son of his mother, and she was a widow, and much people of the city were with her. And when the Lord saw her, He had compassion on her, and said to her: “Weep not.” And He came near and touched the bier. And they that carried it stood still. And He said: “Young man, I say to thee, Arise.” And he that was dead, sat up, and began to speak. And He delivered him to his mother. And there came a fear on them all: and they glorified God, saying: A great Prophet is risen up amongst us, and God has visited His people.

Grace is poured abroad in thy lips : therefore God hath blessed thee for ever and for ages of ages.

May this saving Victim, O Lord, inflame us with that fire of love with which it vehemently kindled the heart of blessed Jane Frances, burning it away with the flames of eternal charity. Through our Lord Jesus Christ Thy Son our Lord, Who liveth and reigneth with Thee in the unity of the Holy Ghost, one God Forever and ever. R. Amen.

Commemoration of the Octave of the Dormition
May the prayer of the Mother of God aid Thy people, O Lord: and although wé know, her, to have passed out of this life, fulfilling the lot of the flesh, may we experience her intercession for us with Thee in Heavenly glory. Through the same Lord Jesus Christ Thy Son. Who liveth and reigneth with Thee in the unity of the Holy Ghost, one God Forever and ever. R.Amen.

PREFACE of the BVM

It is truly meet and just, right and for our salvation, that we should at all times and in all places, give thanks unto Thee, O holy Lord, Father almighty, everlasting God and that we should praise and bless, and proclaim Thee, on the Feast of the Annunciation of the Blessed Mary, ever Virgin: Who also conceived Thine only-begotten Son by the over-shadowing of the Holy Ghost, and the glory of her virginity still abiding, gave forth to the world the everlasting light, Jesus Christ our Lord. Through whom the angels praise Thy Majesty, the Dominations worship it, and the Powers stand in awe. The heavens and the heavenly hosts together with the blessed Seraphim in triumphant chorus unite to celebrate it. Together with them we entreat Thee, that Thou mayest bid our voices also to be admitted, while we say with lowly praise: HOLY, HOLY, HOLY…

Thou hast loved injustice and hated iniquity : therefore God thy God, hath anointed thee with the oil of gladness above thy fellows. Alleluia.

Pour upon us, O Lord, the spirit of Thy love, that we, whom Thou hast filled with the virtue of the Heavenly bread, may, by the intercession of blessed Jane Frances, be made to despise earthly things and with pure minds seek only Thee, our God. Through our Lord Jesus Christ, Thy Son, Who liveth and reigneth with Thee in the unity of the Holy Ghost, one God For ever and ever. R. Amen.

Commemoration Within the Octave of the Assumption
We who have been made partakers of Thy heavenly table, implore Thy mercy, O Lord our God, that as we celebrate the Assumption of the Mother of God, we may through her intercession, be delivered from all evils that beset us. Through the same Lord Jesus Christ, Who livest and reignest, with God the Father, in the unity of the Holy Ghost, one God For ever and ever. R. Amen