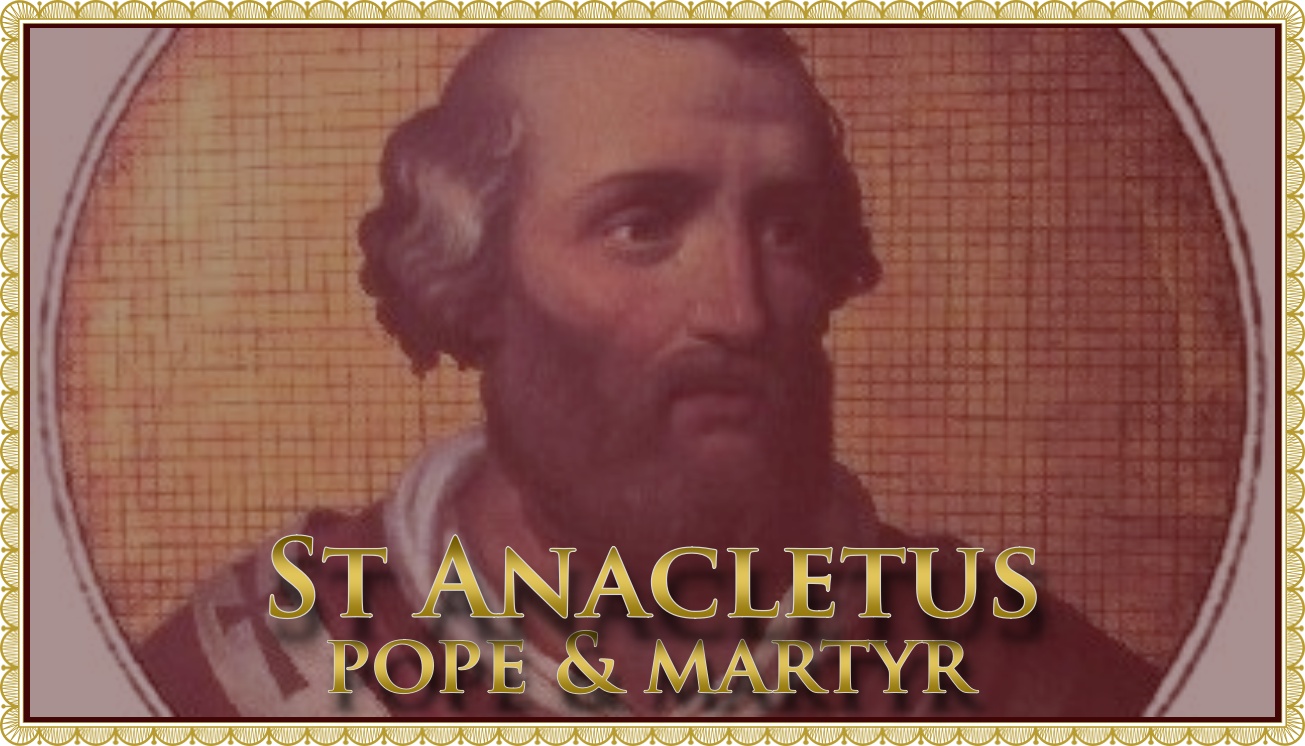 Pope Saint Anacletus was the third leader of the Church and followed both Peter and Linus. Often called Cletus, he ruled from circa 79 to 92 AD. The pope was known for dividing Rome into 25 regions and giving control over each one to different bishops. You can read about the life of Pope Anacletus in this article.

Anacletus was the first pope born and raised in Greece. Born circa 25 AD, he lived in Athenae, the city now known as Athens. His parents named him Anakletos, he would also use the name Kletos. Anacletus knew Peter and worked closely with him. It was Peter who ordained Anacletus and made him a priest, which led to him later becoming pope. He would use both the name Anacletus and the name Cletus.

There is some dispute over his papal reign and how long it lasted because his papacy wasn’t recorded until later years. Most state that he was pope from 80 to 92 AD, but other records list his papacy as running from 77 to 88 AD. We know that he took the position after Pope Saint Linus died and that he likely ruled for 12 years.

Rome looked quite different in the early days than it does today. Anacletus inherited a papacy with no formal rules or edicts. He created parishes in Rome and assigned bishops and others to control those 25 districts. This would help each group establish churches and decide on the hierarchy used in each one. During his time as pope, Anacletus also ordained several priests. Though we have records of some of those priests, they do not list how many he ordained.

To make sure that bishops had the experience that they needed, Anacletus decreed that at least three current bishops must be on hand when a bishop took his orders. He also asked that they took their final orders in public as a way to help followers participate.

Near the end of his papacy, Anacletus would also make changes to churches and burial sites. He called for the construction of a new church built to honour Saint Peter and requested that the church reserve several spots in the nearby cemetery for martyrs. Anacletus believed that martyrs were witnesses to the atrocities that Christians faced and that they deserved a good final resting place. He also asked that some of the spots be set aside for future martyrs.

When Pope Anacletus died, his body was moved to Vatican Hill and placed near Pope Saint Peter. Vatican Hill is now part of Vatican City and home to the current pope. The Canon of Mass, also known as the Royal Canon, mentions his name. Though the Church once had separate feast days for Saint Cletus and Saint Anacletus, it now recognizes the two men as one person known as Pope Saint Anacletus with a single feast day.

Be pleased to watch over thy flock, eternal Shepherd, and keep it under thy continual protection, through thy martyr and supreme pontiff, blessed Anacletus whom thou didst establish as chief shepherd of the whole Church. Through Jesus Christ our Lord, Who livest and reignest, with God the Father, in the unity of the Holy Ghost, God, Forever and ever.

Collect of the Souls
From all perils of soul and body defend us, O Lord, we beseech thee, and by the intercession of blessed and glorious ever Virgin Mary, Mother of God, of blessed Joseph, of thy blessed apostles Peter and Paul, and of blessed N. and all the Saints, graciously grant us safety and peace that all adversities and errors being overcome, thy Church may serve thee in security and freedom

of the Blessed Virgin Mary
Grant, we beseech thee, O Lord God, unto all thy servants, that they may remain continually in the enjoyment of soundness both of mind and body, and by the glorious intercession of the Blessed Mary, always a Virgin, may be delivered from present sadness, and enter into the joy of thine eternal gladness. Through Jesus Christ, thy Son our Lord, Who liveth and reigneth with thee, in the unity of the Holy Ghost, ever one God, world without end. R. Amen.

Lesson from the Epistle of blessed James. Blessed is the man that endureth temptation: for when he is tried, he shall receive the crown of life, which the Lord hath promised to them that love him. Let no man say when he is tempted, I am tempted of God: for God cannot be tempted with evil, neither tempteth he any man: But every man is tempted, when he is drawn away of his own lust, and enticed. Then when lust hath conceived, it bringeth forth sin: and sin, when it is finished, bringeth forth death. Do not err, my beloved brethren. Every good gift and every perfect gift is from above, and cometh down from the Father of lights, with whom is no variableness, neither shadow of turning. Of his own will begat he us with the word of truth, that we should be a kind of first-fruits of his creatures.

The man I have found is my servant David, on him my consecrating oil has been poured my hand shall strengthen him, my arm shall give him courage. V. No enemy shall have his way with him, no emissary of wickedness shall have power to injure him. Alleluia, allelluia. v. Ps 109:4 Thou art a priest forever in the line of Melchisedech. Alleluia.

At this time, Jesus said to the multitude: If any man come to me, and hate not his father, and mother, and wife, and children, and brethren, and sisters, yea, and his own life also, he cannot be my disciple. And whosoever doth not bear his cross, and come after me, cannot be my disciple. For which of you, intending to build a tower, sitteth not down first, and counteth the cost, whether he have sufficient to finish it? Lest haply, after he hath laid the foundation, and is not able to finish it, all that behold it begin to mock him, Saying, This man began to build, and was not able to finish. Or what king, going to make war against another king, sitteth not down first, and consulteth whether he be able with ten thousand to meet him that cometh against him with twenty thousand? Or else, while the other is yet a great way off, he sendeth an ambassage, and desireth conditions of peace. So likewise, whosoever he be of you that forsaketh not all that he hath, he cannot be my disciple.

My faithfulness and mercy shall go with him: as my champion he shall rise to greatness.

We have offered thee our gifts, and now we pray thee, Lord, graciously to enlighten thy Church, so that everywhere thy flock may prosper and its pastors, under thy guidance, be truly pleasing in thy sight. Through our Lord Jesus Christ Thy Son. Who liveth and reigneth with Thee in the unity of the Holy Ghost, one God Forever and ever. R.Amen.

Of the souls
Hear us, O God, our salvation that through the power of this Sacrament thou mayest defend us from all enemies of soul and body and bestow upon us grace here and glory hereafter.

of the Blessed Virgin Mary
Through thy mercy, O Lord, and the intercession of blessed Mary ever Virgin, may this oblation obtain for us prosperity and peace both now and forever. Through Jesus Christ, thy Son our Lord, Who liveth and reigneth with thee, in the unity of the Holy Ghost, ever one God, world without end. R. Amen.

It it truly meet and just, right and for our salvation, to entreat Thee humbly, O Lord, that Thou wouldst not desert Thy flock, O everlasting Shepherd, but, through Thy blessed Apostles, wouldst keep it under Thy constant protection; that it may be governed by those same rulers, whom as vicars of Thy work, Thou didst set over it to be its pastors. And therefore with Angels and Archangels, with Thrones and Dominations, and with all the hosts of the heavenly army, we sing the hymn of Thy glory, evermore saying:

Once for all I have pledged my inviolable word, his posterity shall continue forever; his royalty too, shall last on in my presence like the sun, like the moon’s eternal orb; the witness of heaven is unalterable.

Increase within thy Church, we pray thee, Lord, the spirit of grace which thou has bestowed, so that, through the prayers of thy martyr and supreme pontiff blessed Anacletus, the flock may be not wanting in obedience to their shepherd, nor the shepherd in watchfulness over his flock. Through our Lord Jesus Christ, Who livest and reignest, with God the Father, in the unity of the Holy Ghost, one God For ever and ever. R. Amen.

Of the souls
May the offering of this divine Sacrament cleanse and protect us, O Lord we beseech thee, and by the intercession of the Blessed Virgin Mary, Mother of God, of blessed Joseph, of thy blessed Apostles Peter and Paul, and of blessed N. and all the Saints, may it purify us from all sin, and free us from all adversity.

of the Blessed Virgin Mary
Grant, O Lord, that we, who had partaken of the aids of salvation, may be everywhere protected by the patronage of blessed Mary ever Virgin, in whose honour we have offered these gifts of thy majesty. Through Jesus Christ, thy Son our Lord, Who liveth and reigneth with thee, in the unity of the Holy Ghost, ever one God, world without end. R. Amen.