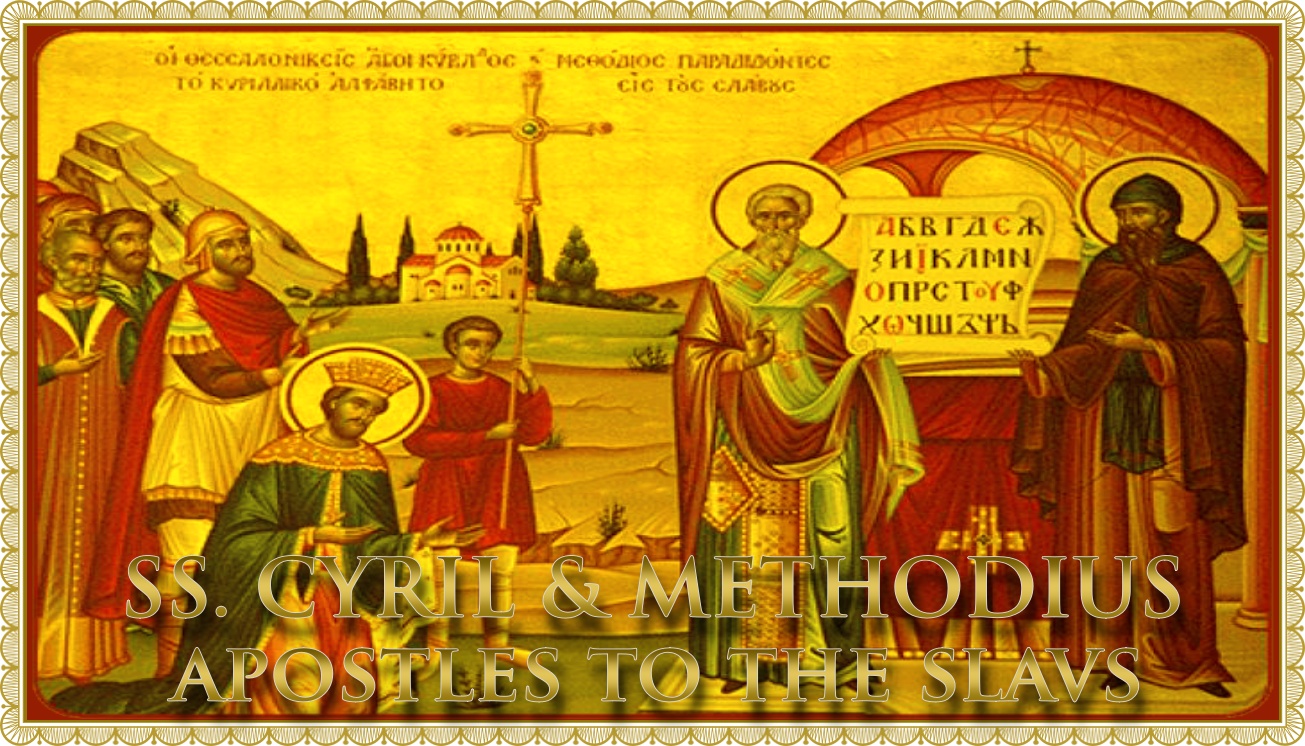 Because their father was an officer in a part of Greece inhabited by many Slavs, these two Greek brothers ultimately became missionaries, teachers, and patrons of the Slavic peoples.

After a brilliant course of studies, Cyril (called Constantine until he became a monk shortly before his death) refused the governorship of a district such as his brother had accepted among the Slavic-speaking population. Cyril withdrew to a monastery where his brother Methodius had become a monk after some years in a governmental post.

A decisive change in their lives occurred when the Duke of Moravia asked the Eastern Emperor Michael for political independence from German rule and ecclesiastical autonomy (having their own clergy and liturgy). Cyril and Methodius undertook the missionary task.

Cyril’s first work was to invent an alphabet, still used in some Eastern liturgies. His followers probably formed the Cyrillic alphabet. Together they translated the Gospels, the psalter, Paul’s letters and the liturgical books into Slavonic, and composed a Slavonic liturgy, highly irregular then.

That and their free use of the vernacular in preaching led to opposition from the German clergy. The bishop refused to consecrate Slavic bishops and priests, and Cyril was forced to appeal to Rome. On the visit to Rome, he and Methodius had the joy of seeing their new liturgy approved by Pope Adrian II. Cyril, long an invalid, died in Rome 50 days after taking the monastic habit.

Methodius continued mission work for 16 more years. He was papal legate for all the Slavic peoples, consecrated a bishop and then given an ancient see (now in the Czech Republic). When much of their former territory was removed from their jurisdiction, the Bavarian bishops retaliated with a violent storm of accusation against Methodius. As a result, Emperor Louis the German exiled Methodius for three years. Pope John VIII secured his release.

Because the Frankish clergy, still smarting, continued their accusations, Methodius had to go to Rome to defend himself against charges of heresy and uphold his use of the Slavonic liturgy. He was again vindicated.

Legend has it that in a feverish period of activity, Methodius translated the whole Bible into Slavonic in eight months. He died on Tuesday of Holy Week, surrounded by his disciples, in his cathedral church.

Opposition continued after his death, and the work of the brothers in Moravia was brought to an end and their disciples scattered. But the expulsions had the beneficial effect of spreading the spiritual, liturgical, and cultural work of the brothers to Bulgaria, Bohemia and southern Poland. Patrons of Moravia, and specially venerated by Catholic Czechs, Slovaks, Croatians, Orthodox Serbians and Bulgarians, Cyril and Methodius are eminently fitted to guard the long-desired unity of East and West. In 1980, Pope John Paul II named them additional co-patrons of Europe (with Benedict).

Let Thy priests, O Lord, be clothed with justice, and let Thy saints rejoice: for Thy servant David’s sake, turn not away the face of Thy anointed. Alleluia, alleluia. V. O Lord, remember David, and all his meekness. v. Glory be to the Father and to the Son and to the Holy Ghost, as it was in the beginning, is now and ever shall be, world without end. Amen.

Almighty, eternal God, Who granted to the Slavonic people that they should come to the knowledge of your name through Your blessed Confessors and Bishops, Cyril and Methodius, grant that, as we glory in their festival, we may be joined with them in fellowship. Through Jesus Christ, thy Son our Lord, Who liveth and reigneth with thee, in the unity of the Holy Ghost, ever one God, world without end. R. Amen.

Lesson from the letter of St. Paul the Apostle to the Hebrews. Brethren: The priests were numerous, because they were prevented by death from continuing in office; but Jesus, because he continues forever, has an everlasting priesthood. Therefore He is able at all times to save those who come to God through Him, since He lives always to make intercession for them. For it was fitting that we should have such a high priest, holy, innocent, undefiled, set apart from sinners, and become higher than the heavens. He does not need to offer sacrifices daily – as the other priests did – first for His own sins, and then for the sins of the people; for this latter He did once for all in offering up Himself, Jesus Christ our Lord.

Her priests I will clothe salvation, and her faithful ones shall shout merrily for joy. V. In her will I make a horn to sprout forth for David; I will place a lamp for My anointed. Alleluia, alleluia. Ps 109:4 The Lord has sworn, and He will not repent: You are a priest forever, according to the order of Melchisedec. Alleluia.

At that time, the Lord appointed seventy-two others, and sent them forth two by two before Him into every town and place where He Himself was about to come. And He said to them, The harvest indeed is great, but the labourers are few. Pray therefore the Lord of the harvest to send forth labourers into His harvest. Go. Behold, I send you forth as lambs in the midst of wolves. Carry neither purse, nor wallet, nor sandals, and greet no one on the way. Whatever house you enter, first say, ‘Peace to this house!’ And if a son of peace be there, your peace will rest upon him; but if not, it will return to you. And remain in the same house, eating and drinking what they have; for the labourer deserves his wages. Do not go from house to house. And whatever town you enter, and they receive you, eat what is set before you, and cure the sick who are there, and say to them, ‘The kingdom of God is at hand for you.

God is wonderful in His Saints; the God of Israel is He Who gives power and strength to His people. Blessed be God!

Look with favor, O Lord, upon the prayers and offerings of Your faithful, that they may be pleasing to You for the feast of Your Saints and may bring us the help of Your mercy. Through Jesus Christ, thy Son our Lord, Who liveth and reigneth with thee, in the unity of the Holy Ghost, ever one God, world without end. R. Amen.

PREFACE of the Holy Trinity

What I tell you in darkness, speak it in the light, says the Lord; and what you hear whispered, preach it on the housetops.

We beseech You, almighty God, Who mercifully dost bestow upon us these heavenly gifts, grant that we may despise all earthly things through the intercession of Your Saints, Cyril and Methodius. Through Jesus Christ, thy Son our Lord, Who liveth and reigneth with thee, in the unity of the Holy Ghost, ever one God, world without end. R. Amen.