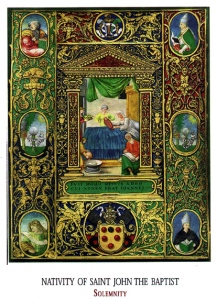 The Precursor of Christ was filled with the Holy Ghost even from his mother’s womb. After an austere life as a hermit, he announced the Advent of Christ, preached penitence, and baptized in the Jordan. He was beheaded during the reign of Herod. The day of the death of other saints is kept as their feast, and in the case of St. John the Baptist the day of his birth is celebrated, as having taken place amidst the outpouring of the gifts of the Paraclete. The feast is celebrated with great liturgical splendour, the stational Mass was celebrated In the Basilica of the Saviour. The grandeur of early devotion to the Baptist need cause no one to wonder, if we realize the eminent position which St. John holds In the history of the Incarnation. His seal of canonization is seen in the eulogy addressed to him by the Word of God Himself made man, when He pointed him out to the people as the greatest among all the prophets, and among all those born of woman, the new Elias, the burning and shining bright.

Many churches and oratories were dedicated to him; at one time three Masses were celebrated in his honour. When Pope Benedict XIV examined the question of the precedence over St. Joseph given to St. John in the Litany of the Saints, it was not considered opportune to decide how the passage in the Gospel (Matthew 11: 11) “among those born of women, there hath not arisen a greater than John the Baptist,” was to be understood. Now that devotion to St. Joseph has thrown so much light on his person, it is clear that the primacy accorded to St. John is to be understood of his prophetic and Messianic mission. He surpassed in dignity and in sanctity all the patriarchs, prophets and saints who announced and prepared the way for the New Testament. St. Joseph belongs to another period. He enters into the divine plan, not as prophet, but as part of the plan of the Incarnation itself. He introduces and presents Jesus with all honour to the world as the heir of the Messianic promises. Mary and Joseph have transcendent dignity; this in no way detracts from the glory of St. John whose praise is sung in the liturgical hymns. Our musical scale took its names (Do, re, mi) from the ascending tones of the Vesper hymn of St John.

From the womb of my mother the Lord hath called me by my name, and He hath made my mouth like a sharp sword; in the shadow of His hand He hath protected me, and hath made me as a chosen arrow. V. (Ps. 91: 2) It is good to give praise to the Lord, and to sing to Thy name, O Most High. v. Glory be to the Father and to the Son and to the Holy Ghost, as it was in the beginning, is now and ever shall be, world without end. Amen. Repeat From the womb…

O God, Who hast made this day honourable to us on account of the birth of blessed John, grant Thy people the grace of spiritual joys, and direct the minds of all the faithful in the way of everlasting salvation. Through our Lord Jesus Christ, Thy Son, Who liveth and reigneth with Thee in the unity of the Holy Ghost, God, Forever and ever.

Lesson from Isaias the Prophet. Give ear, ye islands, and harken, ye people from afar. The Lord hath called me from the womb, from the bowels of my mother He hath been mindful of my name. Arid He hath made my mouth like a sharp sword; in the shadow of His hand He hath protected me, and hath made me as a chosen arrow; in His quiver He hath hidden me. And He said to me, Thou art My servant Israel, for in thee will I glory. And now saith the Lord that formed me from the womb to be His servant. Behold I have given thee to be the light of the gentiles, that thou mayest be My salvation even to the farthest part of the earth. Kings shall see, and princes shall rise up, and adore for the Lord’s sake, and for the Holy One of Israel Who hath chosen thee.

Before I formed thee in the bowels of thy mother, I knew thee: and before thou camest forth out of the womb, I sanctified thee. V. The Lord put forth His hand, and touched my mouth: and said to me. Alleluia, alleluia. V. (Luke 1: 76) Thou, child, shalt be called the Prophet of the Highest; thou shalt go before the Lord to prepare His ways. Alleluia..

Elizabeth’s full time of (being delivered was come, and she brought forth a son, And her neighbours and kinsfolk heard that the Lord had showed His great mercy towards her, and they congratulated with her. And It came to pass, that on the eighth day they came to circumcise the child, and they called him by his father’s name, Zachary. And his mother answering, said Not so, but he shall be called John. And they said to her, There is none of thy kindred that is called by that name. And they made signs to his father, how he would have him called. And demanding a writing-table, he wrote, saying, John is his name: and they all wondered. And immediately his mouth was opened, and his tongue loosed; and he spoke, blessing God. And fear came upon all their neighbours; and all these things were noised abroad over all the hill country of Judea; and all they that had heard them, laid them up in their heart, saying, What a one, think ye, shall this child be? For the hand of the Lord was with him. And Zachary his father was filled with the Holy Ghost; and he prophesied, saying, Blessed be the Lord God of Israel; because He hath visited, and wrought the redemption of His people.

The just man shall flourish like the palm-tree; he shall grow up like the cedar of Lebanon.

We heap Thine altars with gifts, O Lord, celebrating with fitting honour the nativity of him who heralded the coming of the Saviour, and pointed Him out when He had come,Our Lord Jesus Christ, and reignest, in the unity of the Holy Ghost, God. Through our Lord Jesus Christ Thy Son our Lord, Who liveth and reigneth with Thee in the unity of the Holy Ghost, one God Forever and ever.

It is truly meet and just, right and for our salvation, that we should at all times and in all places, give thanks unto Thee, O holy Lord, Father almighty, everlasting God Who, together with Thine only-begotten Son, and the Holy Ghost, art one God, one Lord: not in the oneness of a single person, but in the Trinity of one substance. For what we believe by Thy revelation of Thy glory, the same do we believe of Thy Son, the same of the Holy Ghost, without difference or separation. So that in confessing the true and everlasting Godhead, distinction in persons, unity in essence, and equality in majesty may be adored. Which the Angels and Archangels, the Cherubim also and Seraphim do praise: who cease not daily to cry out, with one voice saying:

Thou, child, shalt be called the Prophet of the Highest; for thou shalt go before the face of the Lord, to prepare His ways.