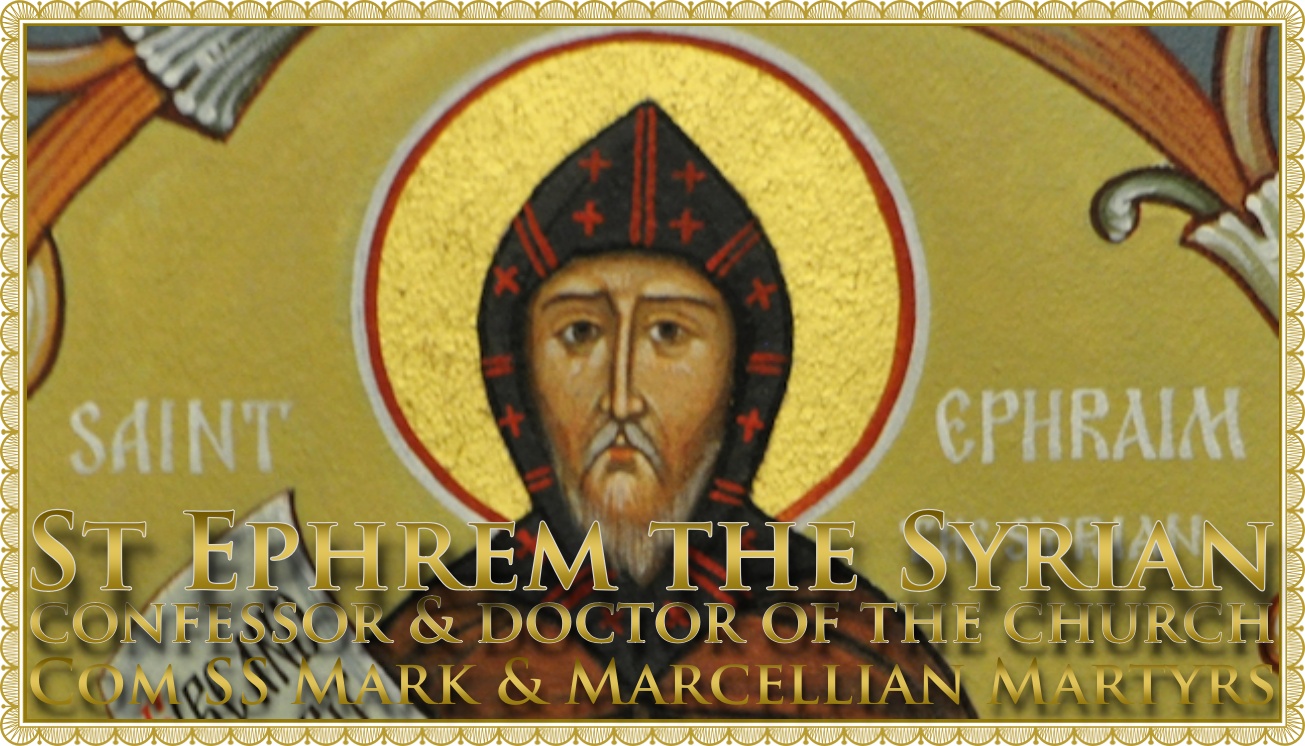 Poet, teacher, orator, and defender of the faith, Ephrem is the only Syriac Christian recognized as a doctor of the Church. He took upon himself the special task of opposing the many false doctrines rampant at his time, always remaining a true and forceful defender of the Catholic Church.

Born in Nisibis, Mesopotamia, he was baptized as a young man and became famous as a teacher in his native city. When the Christian emperor had to cede Nisibis to the Persians, Ephrem fled as a refugee to Edessa, along with many other Christians. He is credited with attracting great glory to the biblical school there. He was ordained a deacon but declined becoming a priest. Ephrem was said to have avoided presbyteral consecration by feigning madness!

He had a prolific pen, and his writings best illumine his holiness. Although he was not a man of great scholarship, his works reflect deep insight and knowledge of the Scriptures. In writing about the mysteries of humanity’s redemption, Ephrem reveals a realistic and humanly sympathetic spirit and a great devotion to the humanity of Jesus. It is said that his poetic account of the Last Judgment inspired Dante.

It is surprising to read that he wrote hymns against the heretics of his day. He would take the popular songs of the heretical groups and using their melodies, compose beautiful hymns embodying orthodox doctrine. Ephrem became one of the first to introduce song into the Church’s public worship as a means of instruction for the faithful. His many hymns have earned him the title “Harp of the Holy Spirit.”

Ephrem preferred a simple, austere life, living in a small cave overlooking the city of Edessa. It was here that he died around 373.

SS. Mark and Marcellian (d. c.290), Roman martyrs. These martyrs are commemorated in the ancient Roman sacramentaries; their tomb, with frescoes of them and their companions, has been identified in the catacomb of St. Balbina. For the details of their Lives the only source is the unreliable 5th‐century Acts of Sebastian.

Mark and Marcellian were twin brothers from a noble Roman family. They had converted to Christianity when they were young and were now deacons in the Roman Church. Although the boys had converted in their youth, their parents remained unconverted. Each brother had a wife and children. When the persecutions of Emperor Diocletian began, the brothers were arrested and thrown into prison. They were threatened with the loss of their lives, unless they offered sacrifices to the Roman gods. Friends intervened and obtained a thirty-day reprieve, in the hope of being able to persuade the two brothers to renounce their faith and make the required sacrifices. Their wives and little children, along with their unconverted parents, begged them with tears and pleading, to make the sacrifices to the Roman gods.

Although they had been released from the prison on a thirty-day reprieve, they were still kept under guard and basically prisoners in the home of the public registrar Nicostratus. St. Sebastian (pg. 34 Building the Family Cookbook Feast Day: January 20th) was a Roman officer in the emperor’s household. St. Sebastian visited Mark and Marcellian every day and gave them encouragement to persevere. These discussions, before relatives and friends, caused many conversions to take place, even Nicostratus. Another man, Chromatius, who kept the prisoners under guard, also converted. He set the prisoners free, resigned his post and left to live in the country. After their release, Mark and Marcellian were hidden by a Christian official in the imperial household. They were betrayed by a spy and arrested again. Fabian (who had replaced Chromatius after his conversion) condemned Mark and Marcellian to death. Their relics were translated from the catacombs first to the church of SS. Cosmas and Damian and then to that of St. Praxedes.

O God, Who willed to enlighten Your Church by the wondrous learning and glorious merits of the life of blessed Ephrem, Your Confessor and Doctor, we humbly pray You, that, by his pleading, You will shield her with Your lasting power against the snares of error and evil. Through Jesus Christ, thy Son our Lord, Who liveth and reigneth with thee, in the unity of the Holy Ghost, God, world without end. R. Amen.

For SS Mark & Marcellianus
Grant, we beseech You, almighty God, that we who celebrate the anniversary of the death of Your holy Martyrs, Mark and Marcellianus, may by their intercession be delivered from all the evils that threaten us. Through Jesus Christ our Lord, Who liveth and reigneth with Thee in the unity of the Holy Ghost, one God Forever and ever. R. Amen.

Lesson from the second letter of St Paul the Apostle to Timothy. Dearly beloved: I charge thee, before God and Jesus Christ, who shall judge the living and the dead, by his coming, and his kingdom: Preach the word: be instant in season, out of season: reprove, entreat, rebuke in all patience and doctrine. For there shall be a time, when they will not endure sound doctrine; but, according to their own desires, they will heap to themselves teachers, having itching ears: And will indeed turn away their hearing from the truth, but will be turned unto fables. But be thou vigilant, labour in all things, do the work of an evangelist, fulfil thy ministry. Be sober. For I am even now ready to be sacrificed: and the time of my dissolution is at hand. I have fought a good fight, I have finished my course, I have kept the faith. As to the rest, there is laid up for me a crown of justice, which the Lord the just judge will render to me in that day: and not only to me, but to them also that love his coming.

GRADUAL Ps 36:30-31
The mouth of the just shall meditate wisdom: V. And his tongue shall speak judgment. The law of his God is in his heart, and his steps shall not be supplanted.

Allelúja, allelúja. Sir 45:9 And he girded him about with a glorious girdle, and clothed him with a robe of glory, Allelúja.

GOSPEL Matt 5:13-19
In that time, Jesus said to His disciples: You are the salt of the earth. But if the salt lose its savour, wherewith shall it be salted? It is good for nothing any more but to be cast out, and to be trodden on by men. You are the light of the world. A city seated on a mountain cannot be hid. Neither do men light a candle and put it under a bushel, but upon a candlestick, that it may shine to all that are in the house. So let your light shine before men, that they may see your good works, and glorify your Father who is in heaven. Do not think that I am come to destroy the law, or the prophets. I am not come to destroy, but to fulfill. For amen I say unto you, till heaven and earth pass, one jot, or one tittle shall not pass of the law, till all be fulfilled. He therefore that shall break one of these least commandments, and shall so teach men, shall be called the least in the kingdom of heaven. But he that shall do and teach, he shall be called great in the kingdom of heaven.

OFFERTORY ANTIPHON Psalm 91:13
The just shall flourish like the palm tree: he shall grow up like the cedar of Libanus.

O Lord, may the loving prayer of blessed Ephrem, Your Confessor and Doctor, fail us not, both to make our gifts acceptable and ever to obtain for us Your forgiveness. Through Jesus Christ, thy Son our Lord, Who liveth and reigneth with thee, in the unity of the Holy Ghost, God, world without end. R. Amen.

For SS Mark & Marcellianus
Sanctify the offerings dedicated to You, O Lord, and through the intercession of blessed Mark and Marcellianus, Your Martyrs, look upon us with mercy because of them. Through our Lord Jesus Christ Thy Son. Who liveth and reigneth with Thee in the unity of the Holy Ghost, one God Forever and ever. R. Amen.

The faithful and wise steward, whom his lord setteth over his family, to give them their measure of wheat in due season.

May blessed Ephrem, Your Confessor, and renowned Doctor, plead for us, so that the sacrifice we offer You may bring us salvation. Through Jesus Christ, thy Son our Lord, Who liveth and reigneth with thee, in the unity of the Holy Ghost, God, world without end. R. Amen.

For SS Mark & Marcellianus
Refreshed by the sacramental gift of Your salvation, we humbly beseech You, O Lord, through the intercession of blessed Mark and Marcellianus, Your Martyrs, that, enjoying its savor, we may be made new by its action. Through our Lord Jesus Christ, Who livest and reignest, with God the Father, in the unity of the Holy Ghost, one God For ever and ever. R. Amen.