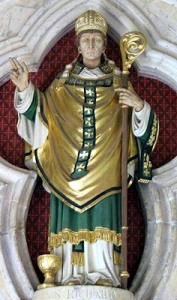 Bishop and leading figure in England during his era, also called Richard de Wyche. Born at Wyche, Worcestershire, England, he was orphaned while a young lad, managed to regain his fortune which had been mismanaged by others, and received an excellent education at Oxford, Paris, and Bologna, Italy. At Oxford, he studied under the famous Robert Grossteste and became friends with St. Edmund Rich. He earned a doctorate in law from the University of Bologna. He was appointed chancellor of Oxford in 1235 and then chancellor to Edmund Rich, who by now was archbishop of Canterbury. After accompanying Edmund into retirement at the Cistercian abbey of Pontigny, France, he departed the community upon Edmund’s death, taught at the Dominican house in Orkans, and was ordained there in 1243. Upon going home to England, he was named chancellor to Edmund’s successor, St. Boniface of Savoy. When King Henry Ill appointed Ralph Neville to the see of Chichester in 1244, Boniface declared the nomination invalid and named Richard to the post, an act which caused an uproar in the kingdom. Finally, in 1245, Pope Innocent IV found in Richard’s favour, but Richard was prevented from entering his palace by the machinations of Henry. Only after the king was threatened with excommunication was Richard able to take up his duties. He insisted upon strict adherence to discipline among the clergy, aided the poor, and fearlessly denounced the corruption and vices of the contemporary Church and the royal court. His death came at Dover, in a home for poor priests, while delivering a plea for a crusade. Richard was canonized in 1262, and his tomb became a popular shrine noted for its miracles until the Reformation in England.

Sussex Day is the county day for the historic county of Sussex in southern England and is celebrated on 16 June each year to celebrate the rich heritage and culture of Sussex.

The event takes place on the feast day of St Richard of Chichester, Sussex’s patron saint which date marks the anniversary of the translation of St Richard’s body from its original burial place in the nave of Chichester Cathedral to an elaborate shrine at the Cathedral on 16 June 1276.

The Lord made a covenant of friendship with him, and made him a prince; that he should possess the dignity of priesthood forever. Ps. 131:1 Remember, O Lord, David and all his meekness. v. Glory be to the Father and to the Son and to the Holy Ghost, as it was in the beginning, is now and ever shall be, world without end. Amen.

O God, who by the merits of thy blessed confessor bishop Richard didst shed upon thy Church the lustre of glorious miracles, grant that through his intercession we thy servants may reach the glory of everlasting bliss: Through Jesus Christ, thy Son our Lord, Who liveth and reigneth with thee, in the unity of the Holy Ghost, ever one God, world without end. R. Amen.

Lesson from the book of Ecclesiasticus: Behold, a great priest, who in his days pleased God, and was found just; and in the time of wrath he was made a reconciliation. There was not found the like to him, who kept the law of the Most High. Therefore, by an oath, the Lord made him to increase among his people. He gave him the blessing of all nations, and confirmed His covenant upon his head. He acknowledged him in His blessings; He preserved for him His mercy; and he found grace before the eyes of the Lord. He glorified him in the sight of kings, and gave him a crown of glory. He made an everlasting covenant with him, and gave him a great priesthood; and made him blessed in glory. To execute the office of the priesthood, and to have praise in His name, and to offer Him a worthy incense for an odor of sweetness.

Alleluia, alleluia. V. Ps 109:4 Thou art a priest forever in the line of Melchisedech. Alleluia. V. Here is a priest the Lord has crowned with glory. Alleluia.

Grant we pray thee, merciful God, that with thy blessed confessor bishop Richard pleading for us, the gift we offer here before thy majesty may obtain for us the grace to live a good life now, and eternal glory hereafter: Through Jesus Christ, thy Son our Lord, Who liveth and reigneth with thee, in the unity of the Holy Ghost, ever one God, world without end. R. Amen.

May this holy eucharist of which we have partaken, Lord, and of which thy blessed confessor bishop Richard was a devout minister, accomplish in us its saving work: Through Jesus Christ, thy Son our Lord, Who liveth and reigneth with thee, in the unity of the Holy Ghost, ever one God, world without end. R. Amen.