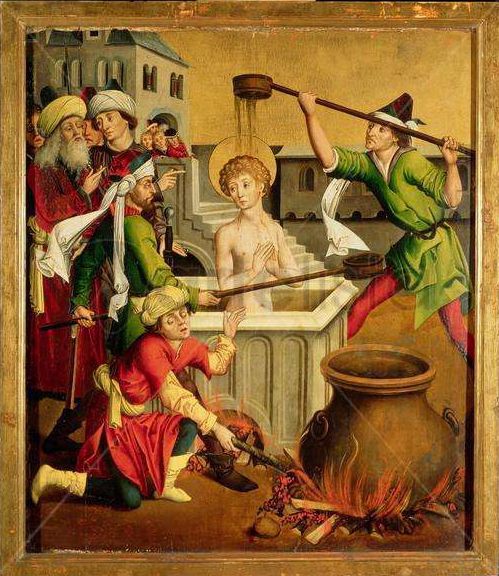 IN the year 95, St. John, who was the only surviving apostle, and governed all the churches of Asia, was apprehended at Ephesus, and sent prisoner to Rome. The Emperor Domitian did not relent at the sight of the venerable old man, but condemned him to be cast into a caldron of boiling oil. The martyr doubtless heard, with great joy, this barbarous sentence; the most cruel torments seemed to him light and most agreeable, because they would, he hoped, unite him forever to his divine Master and Saviour. But God accepted his will and crowned his desire; He conferred on him the honor and merit of martyrdom, but suspended the operation of the fire, as He had formerly preserved the three children from hurt in the Babylonian furnace. The seething oil was changed in his regard into an invigorating bath, and the Saint came out more refreshed than when he had entered the caldron. Domitian saw this miracle without drawing from it the least advantage, but remained hardened in his iniquity. However, he contented himself after this with banishing the holy apostle into the little island of Patmos. St. John returned to Ephesus, in the reign of Nerva, who by mildness, during his short reign of one year and four months, labored to restore the faded lustre of the Roman Empire. This glorious triumph of St. John happened without the gate of Rome called Latina. A church which since has always borne this title was consecrated in the same place in memory of this miracle, under the first Christian emperors.

O God, Who beholdest that our own ill deeds disquiet us on every side, grant, we beseech Thee, that the glorious intercession of blessed John,Thine apostle and evangelist, may be our protection. Through Jesus Christ our Lord, Who liveth and reigneth with Thee in the unity of the Holy Ghost, one God Forever and ever. R.Amen.

Then shall the just stand with great constancy against those that have afflicted them, and taken away their labours. These seeing it, shall be troubled with terrible fear, and shall be amazed at the suddenness of their unexpected salvation. Saying within themselves, repenting, and groaning for anguish of spirit: These are they, whom we had some time in derision, and for a parable of reproach. We fools esteemed their life madness, and their end without honour. Behold how they are numbered among the children of God, and their lot is among the saints.

At that time, the mother of the sons of Zebedee came to Jesus with her sons, worshipping, and asking something of Him. Who said to her: “What wilt thou?” She saith to Him: Say that these my two sons may sit, the one on Thy right hand, and the other on Thy left, in Thy kingdom. And Jesus answering, said:”You know not what you ask, can you drink the chalice that I shall drink?” They saith to Him: We can. He saith to them: “My chalice indeed you shall drink; but to sit on my right or left hand is not Mine to give to you, but to them for whom it is prepared by My Father.”

Receiving our gifts and prayers, we beseech Thee, O Lord, do Thou cleanse us with Thy heavenly mysteries and mercifully hear us. Through our Lord Jesus Christ Thy Son our Lord, Who liveth and reigneth with Thee in the unity of the Holy Ghost, one God Forever and ever. R. Amen.

It is truly meet and just, right and for our salvation, to entreat Thee humbly, O Lord, that Thou woulds not desert Thy flock. O everlasting Shepherd; but through Thy blessed Apostles, wouldst keep it under Thy constant protection; that it may be governed by those same rulers, whom as vicars of Thy work, Thou didst set over it to be its pastors. And therefore with Angels and Archangels, with Thrones and Dominations, and with all the hosts of the heavenly army, we sing the hymn of The glory, evermore saying:  HOLY, HOLY, HOLY…

Refreshed with the bread of Heaven, we beseech Thee, O Lord, that we may be nourished unto everlasting life. Through Our Lord Jesus Christ, Thy Son, Who liveth and reigneth with Thee in the unity of the Holy Ghost, one God For ever and ever. R. Amen.