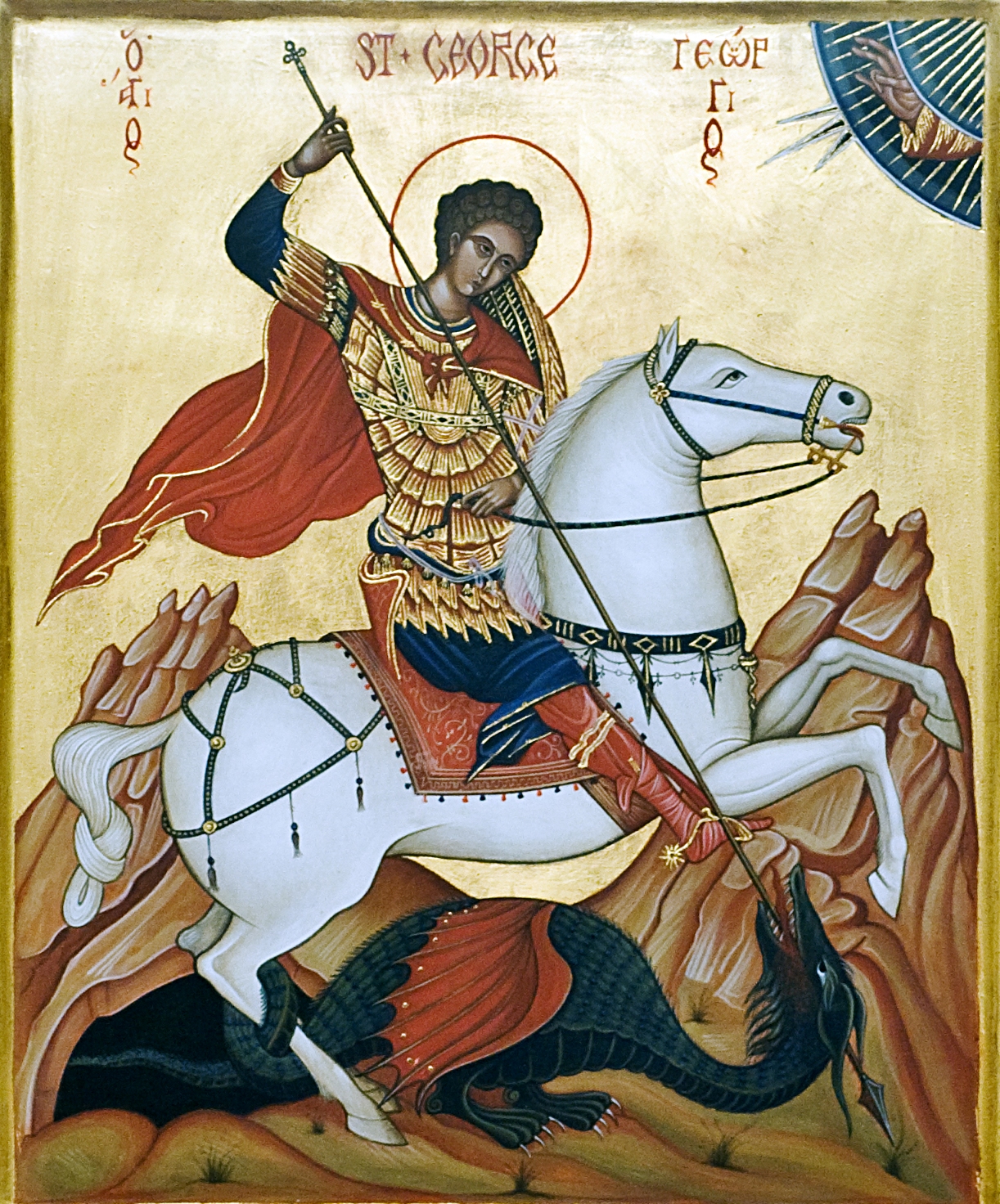 The feast of St. George is found in the Ethiopian, Coptic, Syriac, and Latin liturgies. The ancient “Georgia” is named after him. He is renowned as the armed defender of the Church, one who carried the trophies of victory over the enemy.

Saint George (c. 275/281 – 23 April 303 AD) was a Greek who became an officer in the Roman army. His father was the Greek Gerondios from Cappadocia Asia Minor and his mother was from the city Lydda. Lydda was a Greek city in Palestine from the times of the conquest of Alexander the Great (333 BC). Saint George became an officer in the Roman army in the Guard of Diocletian.

The Emperor Diocletian had at first favored this illustrious son of a noble family of Cappadocia, but when St. George reproached the Emperor with his cruelty to Christians, he was cast into prison and put to death with such great cruelty that in the Eastern Liturgy he is styled the “Great Martyr.”

St. George is the patron saint of England. His cross forms the national flag of England, and features within the Union Flag of the United Kingdom, and other national flags containing the Union Flag, such as those of Australia and New Zealand. Traces of the cult of Saint George in England pre-date the Norman Conquest in the eleventh century; by the fourteenth century the saint had been declared both the patron saint and the protector of the royal family.

O God, Who dost gladden us by the merits and inter-cession of blessed George, Thy Martyr, mercifully grant that we, who ask Thy favors through him, may obtain them by the gift of Thy grace. Through Jesus Christ our Lord, Who liveth and reigneth with Thee in the unity of the Holy Ghost, one God Forever and ever. R.Amen.

Alleluia, alleluia. V. Ps. 88:6 The heavens, Lord, are witness of thy wonderful power, of thy faithfulness before the court of the holy ones. Alleluia. V. Lord, thou hast set a jewelled crown upon his head. Alleluia.

I am the true vine, and my Father is the husbandman. Every branch in me that beareth not fruit he taketh away: and every branch that beareth fruit, he purgeth it, that it may bring forth more fruit. Now ye are clean through the word which I have spoken unto you. Abide in me, and I in you. As the branch cannot bear fruit of itself, except it abide in the vine; no more can ye, except ye abide in me. I am the vine, ye are the branches: He that abideth in me, and I in him, the same bringeth forth much fruit: for without me ye can do nothing. If a man abide not in me, he is cast forth as a branch, and is withered; and men gather them, and cast them into the fire, and they are burned. If ye abide in me, and my words abide in you, ye shall ask what ye will, and it shall be done unto you.

Sanctify the gifts we offer Thee, O Lord, and through the intercession of blessed George, Thy martyr, cleanse us by them from the stains of our sins. Through our Lord Jesus Christ Thy Son our Lord, Who liveth and reigneth with Thee in the unity of the Holy Ghost, one God Forever and ever. R. Amen.

We beseech Thee, O almighty God, that those whom Thou dost refresh with Thy sacrament, Thou also grant them, by the intercession of blessed George, Thy martyr, to serve Thee, as befits them, with behavior pleasing unto Thee. Through Our Lord Jesus Christ, Thy Son, Who liveth and reigneth with Thee in the unity of the Holy Ghost, one God For ever and ever. R. Amen.