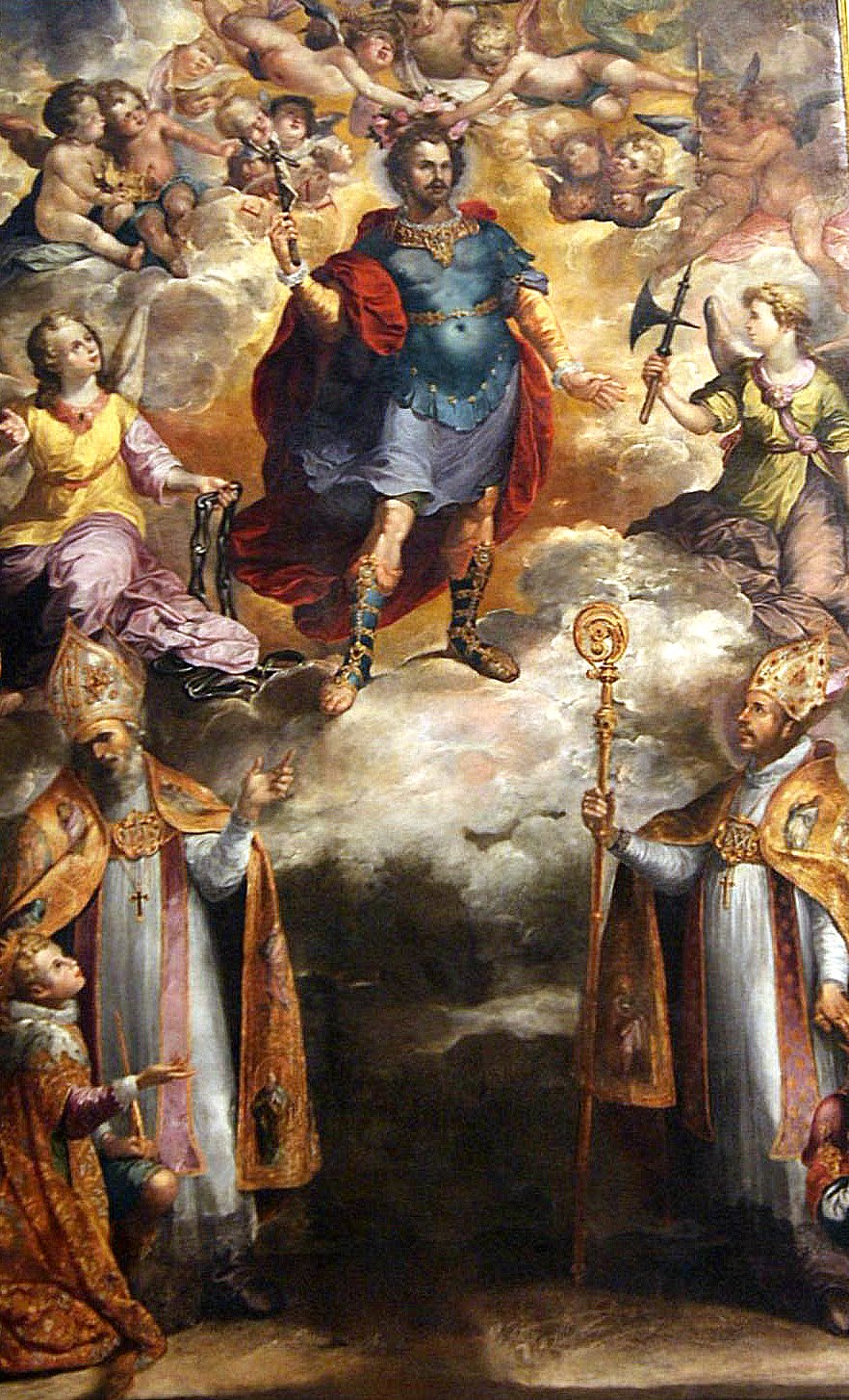 Leovigild, Arian King of the Visigoths, had two sons, Hermenegild and Recared, who were reigning conjointly with him. All were Arians, but Hermenegild married a zealous Catholic, the daughter of Sigebert, King of France, and by her holy example was converted to the faith. His father, on hearing the news, denounced him as a traitor, and marched to seize his person. Hermenegild tried to rally the Catholics of Spain in his defense, but they were too weak to make any stand; and after a two years’ fruitless struggle, Hermenegild surrendered on the assurance of a free pardon. Once he was safely in the royal camp, the king had him loaded with fetters and cast into a foul dungeon at Seville.

Tortures and bribes were in turn employed to shake his faith, but Hermenegild wrote to his father that he regarded the crown as nothing, and preferred to lose scepter and life rather than betray the truth of God. At length, on Easter night, an Arian bishop entered his cell, and promised him his father’s pardon if he would receive Communion from his hands. Hermenegild indignantly rejected the offer, and knelt with joy for his death-stroke, praying for his persecutors. The same night a light streaming from his cell told the Christians keeping vigil nearby that the martyr had won his crown and was celebrating the Resurrection of the Lord with the Saints in glory.

King Leovigild, on his death-bed, was changed interiorly. He had been witness to the miracles that had occurred after his son’s cruel death, and he told his son and successor Recared to seek out Saint Leander, whom he himself had persecuted. Recared should follow Hermenegild’s example, said the king, and be received by the bishop into the Church. Recared did so; and although his father himself had not had the courage to renounce the false faith publicly, after his father’s death the new king labored so earnestly for the extirpation of Arianism that he brought over the whole nation of the Visigoths to the Church. Nor is it to be wondered, says Saint Gregory, that he came thus to be a preacher of the true faith, since he was the brother of a martyr, whose merits helped him to bring so many into the haven of God’s Church.

Thou last protected me, O God, from the assembly of the malignant, alleluia: from the multitude of the workers of iniquity, alleluia. alleluia. (Ps. 63: 2) Hear, O God, my prayers, when I make supplication to Thee: deliver my soul from the fear of the enemy v. Glory be to the Father and to the Son and to the Holy Ghost, as it was in the beginning, is now and ever shall be, world without end. Amen…

Grant, we beseech Thee, O almighty God, that we, who venerate the birthday of blessed Vitalis, Thy martyr, may, through his intercession, be strengthened in the love of Thy name. Through Our Lord…

Dearly beloved, be mindful that the Lord Jesus Christ is risen again from the dead, of the seed of David, according to my gospel. Wherein I labor even unto bands, as an evil-doer: but the word of God is not bound. Therefore I endure all things for the sake of the elect, that they may also obtain the salvation, which is in Christ Jesus, with heavenly glory. But thou hast fully known my doctrine, manner of life, purpose, faith, long-suffering, love, patience, persecutions, afflictions, such as came upon me at Antioch, at Iconium, and at Lystra; what persecutions I endured and out of them all the Lord delivered me. And all that will live godly in Jesus Christ shall suffer persecution.

At that time, The Lord appointed also other seventy-two; and He sent them two and two before His face into every city and place whither He Himself was to come. And He said to them, “The harvest indeed is great, but the laborers are few: pray ye therefore the Lord of the harvest, that He send laborers into His harvest. Go, behold I send you as lambs among wolves. Carry neither purse, nor scrip, nor shoes; and salute no man by the way. Into whatsoever house you enter, first say, Peace be to this house: and if the son of peace be there, your peace shall rest upon him: but if not, it shall return to you. And in the same house remain, eating and drinking such things as they have: for the laborer is worthy of his hire. Remove not from house to house. And into what city soever you enter, and they receive you, eat such things as are set before you; and heal the sick that are therein; and say to them, The kingdom of God is come nigh unto you.”

The Heavens shall confess Thy wonders, O Lord, and Thy truth in the church of the saints, alleluia, alleluia.

The just shall rejoice in the Lord, and shall hope in Him: and all the upright in heart shall be praised, alleluia, alleluia.