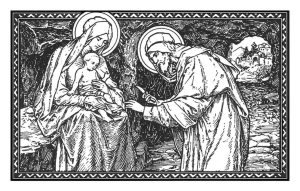 The Circumcision of Our Lord: Missa “Puer natus”

Circumcision was a sacrament of the Old Law, and the first legal observance required of the descendants of Abraham by Almighty God. It was a sacrament of initiation in the service of God, and a promise, an engagement, to believe and act as He had revealed and directed. The law of circumcision continued in force until the death of Christ. Our Saviour having thus been born under the law, it became Him who came to teach mankind obedience to the law of God,to fulfill all justice, and to submit to it. He was circumcised that He might redeem those who were under the law, by freeing them from the servitude of it, and that those who were formerly in the condition of servants might be set at liberty and receive the adoption of sons in Baptism, which, by Christ’s institution, succeeded to circumcision. (cf. Gal. 4:5)

On the day when the divine Infant was circumcised, He received the name of Jesus, which was assigned to Him by the Angel before He was conceived, and which signifies Savior. That name, so beautiful, so glorious, the divine Child does not wish to bear for one moment without fulfilling its meaning. Even at the moment of His circumcision He showed Himself a Savior by shedding for us that blood of which a single drop is more than sufficient for the ransom and salvation of the whole world.

A Child is born to us, and a Son is given to us: Whose government is upon His shoulder and His Name shall be called, the Angel of Great Counsel. (Ps. 97: 1) Sing ye to the Lord a new canticle: for He hath done wonderful things. v. Glory be to the Father and to the Son and to the Holy Ghost, as it was in the beginning, is now and ever shall be, world without end. Amen.
Repeat A Child is born…

O God, Who by the fruitful virginity of blessed Mary hast bestowed upon the human race the rewards of eternal salvation: grant, we beseech Thee, that we may experience the intercession of her, through whom we have been made worthy to receive the Author of life. Through our Lord Jesus Christ Thy Son. Who liveth and reigneth with Thee. in the unity of the Holy Ghost, God, world without end.
R.Amen.

Commemoration of the Nativity
Grant, we beseech Thee, almighty God, that the new birth of Thine only-begotten Son in the flesh may set us free, who are held by the old bondage under the yoke of sin. Through the same Lord Jesus Christ Thy Son, Who liveth and reigneth with Thee in the unity of the Holy Ghost, God, world without end.
R.Amen.

Lesson from the Epistle of blessed Paul the Apostle to Titus. Dearly beloved: For the grace of God our Saviour hath appeared to all men: Instructing us, that, denying ungodliness and worldly desires, we should live soberly and justly and godly in this world, looking for the blessed hope and coming of the glory of the great God and our Saviour Jesus Christ. Who gave himself for us, that he might redeem us from all iniquity and might cleanse to himself a people acceptable, a pursuer of good works. These things speak and exhort and rebuke with all authority. Let no man despise thee.

All the ends of the earth have seen the salvation of our God. Sing joyfully to God, all the earth. V. The Lord hath made known His salvation: He hath revealed His justice in the sight of the Gentiles. Alleluia, alleluia. V. (Hebrews 1: 1-2) God, Who, at sundry times and in divers manners, spoke in times past to the fathers by the prophets, last of all, in these days, hath spoken to us by His Son.

At that time after eight days were accomplished, that the Child should be circumcised, His name was called JESUS, which was called by the angel before He was conceived in the womb.

Thine are the heavens, and thine is the earth, the world and the fullness thereof Thou hast founded: justice and judgment are the preparation of Thy Throne.

Receive our gifts and prayers, we beseech Thee, O Lord; cleanse us by these heavenly Mysteries, and mercifully hear us. Through our Lord Jesus Christ, Thy Son, Who liveth and reigneth with Thee in the unity of the Holy Ghost, one God Forever and ever.
R.Amen.

Commemoration of the Nativity
Sanctify, O Lord, the gifts offered to Thee, by the new birth of Thine Only-begotten Son: and cleanse us from the stains of our sins. Through our Lord Jesus Christ, Thy Son, Who liveth and reigneth with Thee in the unity of the Holy Ghost, one God World without end.
R.Amen.

Communicating, and keeping this most holy day, in which the spotless virginity of blessed Mary brought forth a Savior to this world and also reverencing the memory of the same glorious Mary, ever Virgin Mother of the same our God and Lord Jesus Christ: as also blessed Joseph, Spouse of the Virgin, of the blessed Apostles and Martyrs Peter and Paul, Andrew, James, John, Thomas, James, Philip, Bartholomew, Matthew, Simon and Thaddeus: Linus, Cletus, Clement, Xystus, Cornelius, Cyprian, Lawrence, Chrysogonus, John and Paul, Cosmas and Damian, and of all Thy Saints, through whose merits and prayers, grant that we may in all things be defended by the help of Thy protection (He joins his hands.) Through the same Christ our Lord. Amen.

All the ends of the earth have seen the salvation of our God.

May this communion, O Lord, cleanse us from guilt: and through the intercession of the blessed Virgin Mary, Mother of God, make us sharers of the heavenly remedy. Through the same Lord Jesus Christ, Thy Son, Who liveth and reigneth with Thee in the unity of the Holy Ghost, one God For ever and ever.
R. Amen.

Commemoration of the Nativity
Grant, we beseech Thee, almighty God, that as the Savior of the world, born on this day, is the Author of our heavenly birth, so He may also be to us the Giver of immortality. Through the same Lord Jesus Christ, Thy Son, Who liveth and reigneth with Thee in the unity of the Holy Ghost, one God Forever and ever.
R. Amen.