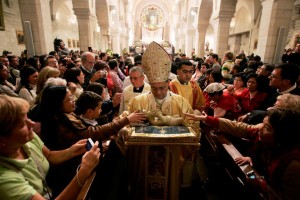 First Mass of the Nativity of Our Lord: Missa “Dóminus dixit”

This first Mass at Midnight for the Solemnity of the Nativity of Our Lord, the Redeemer of mankind, has always been held at the Station of St. Mary Major where the relics of the Bethlehem crib are kept for it was at midnight that Our Lady brought forth her first-born Son into the world and laid Him in a cradle, or a manger. As we saw in Advent, the first Coming of Our Lord prepares us for the second Coming.

This Mass is often called the “Mass of the Angels” (Missa de Angelis) because of the heavenly multitude that appeared to the shepherds and announced the birth of the Saviour. Before the Mass the “Proclamation” is sung, announcing the impending Incarnation and setting it in the context of history. The Gloria is also sung for the first time since the beginning of Lent and after being intoned is celebrated with a fanfare and bells (like Maundy Thursday and the Easter Vigil) joyfully recalling the first singing of the Angelic anthem to the shepherds. Also, immediately after the Consecration, to commemorate the first appearing of the Incarnation, “Yea Lord we greet Thee” is sung from the hymn, Adeste Fidelis. Finally, at the end of the Mass, the Bambino is processed from the Altar to the Crib and the Last Gospel read there as a First Visit.

The year from the creation of the world, when in the beginning God created heaven and earth, five thousand one hundred and ninety-nine: from the deluge, the year two thousand nine hundred and fifty-seven: from the birth of Abraham, the year two thousand and fifteen: from Moses and the going out of the people of Israel from Egypt, the year one thousand five hundred and ten: from David’s being anointed King, the year one thousand and thirty-two: in the sixty-fifth week according to the prophecy of Daniel: in the one hundred and ninety-fourth Olympiad: from the building of the city of Rome, the year seven hundred and fifty-two: in the forty-second year of the reign of Octavian Augustus: the whole world being in peace: in the sixth age of the world: Jesus Christ, the eternal God, and Son of the eternal Father, wishing to consecrate this world by his most merciful coming, being conceived of the Holy Ghost, and nine months since his conception having passed, in Bethlehem of Juda is born of the Virgin Mary, being made man: THE NATIVITY OF OUR LORD JESUS CHRIST ACCORDING TO THE FLESH.

The Lord hath said to me: Thou art My Son, this day have I begotten Thee. (Ps. 2: 1) Why have the gentiles raged, and the people devised vain things? v. Glory be to the Father and to the Son and to the Holy Ghost, as it was in the beginning, is now and ever shall be, world without end. Amen.
Repeat The Lord hath said…

Grant us, we beseech Thee, almighty God, that we on whom the new light of Thy Incarnate Word is poured, may show forth in our works that brightness which now doth illuminate our minds by faith. Through the same our Lord Jesus Christ. Who with Thee livest and reignest, in the unity of the Holy Ghost, world without end. R. Amen.

Lesson from the Epistle of Blessed Paul the Apostle to Titus. Dearly beloved, The grace of God our Saviour hath appeared to all men, instructing us, that, denying ungodliness and worldly desires, we should live soberly and justly and godly in this world, looking for the blessed hope and coming of the glory of the great God and our Saviour Jesus Christ: Who gave Himself for us, that He might redeem us from all iniquity, and might cleanse to Himself a people acceptable, a pursuer of good works. These things speak and exhort: in Christ Jesus our Lord.

With Thee is the principality in the day of Thy strength: in the brightness of the Saints, from the womb before the daystar I begot Thee. V. The Lord said to my Lord: Sit Thou at My right hand, until I make Thine enemies Thy footstool. Alleluia, alleluia. (Ps. 2: 7) The Lord hath said to me, Thou art My Son, this day I have begotten Thee. Alleluia.

At that time there went out a decree from Cæsar Augustus, that the whole world should be enrolled. This enrolling was first made by Cyrinus, the governor of Syria. And all went to be enrolled, every one into his own city. And Joseph also went up from Galilee out of the city of Nazareth, into Judea to the city of David, which is called Bethlehem: because he was of the house and family of David, to be enrolled with Mary, his espoused wife, who was with child. And it came to pass that when they were there, her days were accomplished that she should be delivered. And she brought forth her firstborn Son and wrapped Him in swaddling clothes, and laid Him in a manger: because there was no room for them in the inn. And there were in the same country shepherds watching and keeping the night watches over their flock. And behold an Angel of the Lord stood by them, and the brightness of God shone around about them, and they feared with a great fear. And the Angel said to them: Fear not; for behold I bring you good tidings of great joy, that shall be to all the people: for this day is born to you a Saviour, who is Christ the Lord, in the city of David. And this shall be a sign unto you: you shall find the Infant wrapped in swaddling clothes, and laid in a manger. And suddenly there was with the Angel a multitude of the heavenly army, praising God and Saying: Glory to God in the highest, and on earth peace to men of good will.

Let the heavens rejoice, and let the earth be glad before the face of the Lord: because He cometh.

May our offering on this day’s feast be acceptable to Thee, O Lord, we beseech Thee: that by Thy bounteous grace, though this sacred interchange, we may be found like unto Him, in whom our nature is united to Thee. Who with Thee liveth… Amen.

In the brightness of the saints, from the womb before the day star I begot thee.

Grant to us, we beseech Thee, O Lord, that we, who rejoice in celebrating by these Mysteries, the Birth of our Lord Jesus Christ, may by worthy lives, deserve to attain unto fellowship with Him. Who with Thee liveth… R. Amen.