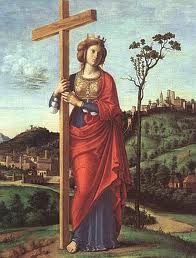 Feast of the Exaltation of the Holy Cross: Missa “Nos autem”

The Feast of the Exaltation of the Holy Cross celebrates three historical events: the finding of the True Cross by Saint Helena, the mother of the emperor Constantine; the dedication of churches built by Constantine on the site of the Holy Sepulchre and Mount Calvary; and the restoration of the True Cross to Jerusalem by the emperor Heraclius II. But in a deeper sense, the feast also celebrates the Holy Cross as the instrument of our salvation. This instrument of torture, designed to degrade the worst of criminals, became the life-giving tree that reversed Adam’s Original Sin when he ate from the Tree of the Knowledge of Good and Evil in the Garden of Eden.

In the Latin Roman Rite this feast is celebrated on September 14th each year to celebrate the Exaltation of the Holy Cross on which Jesus Christ, Our Lord and Savior, died. Historians record that the true cross was unearthed by the Empress Saint Helena, mother of the Emperor Constantine the Great in the year 326. With Constantine as emperor his mother had the funds and the visa so-to-speak to conduct an extensive expedition for the true cross for it was the sign of the cross in the sky that enabled her son to be victorious – “In hoc signo vinces.” Though she was nearly 80 years old her mission was to uncover Christ’s cross so that all the world could give it the reverence and veneration it deserved. On arriving in Jerusalem there was no visible sign of any evidence because the heathens had constructed pagan temples over anything Christian to show their disdain.

This was the signal to Helena where to look and so she sought out where stones had been piled high, leading her to many discoveries including the sepulchre where Jesus was buried, finding the tools of torture as well after she had the pagan temples destroyed. In the process her expedition nearby uncovered three crosses with the nail holes still visible and, after more digging, discovered the crude rough iron nails that had pierced the hands and feet of our Savior, as well as the two thieves.

Helena grappled with which of the three was the true cross and sought out the holy bishop Saint Macarius, who suggested to Helena that the three crosses be taken to a very influential lady who lay very ill in the city. His reasoning and faith was that God would reveal which was the true cross when it touched and healed the sick woman. Helena did just this as Macarius prayed for the miracle they sought. God answered their prayers when the third cross was placed near the woman after the first two had failed. Almost immediately the woman regained full health. Helena was so overcome with joy and gratitude that she ordered a church be built on the spot where she discovered the cross and placed the major portion of the cross in an elegant silver casing inside the church for protection, entrusting it to St. Macarius. Because this pine wood cross was shredding some, Helena took a healthy piece back with her to Rome, placing it in another church she had delegated to be built there which was renamed the Church of Santa Croce in Rome where it is still preserved today. Helena died peacefully in her son Constantine’s arms on August 18, 326.

St. Cyril of Jerusalem, Macarius’ successor, stated that pieces of the true cross were spreading throughout the world which later confirmed what St. Paulinus of Nola wrote: though pieces of the sacred wood were slivered off the main cross almost daily and given to the devout, the cross seemed never to diminish in size. Today these relics are indeed on every continent and we have personally seen many times crosses that contain a sliver of the true cross. As a relic the sliver of the cross is often carried beneath a covered canopy in procession. When it is presented for exposition it is customary to genuflect in veneration, and kissing the relic is a total indication of respect and veneration.

But it behooves us to glory in the cross of Our Lord Jesus Christ: in Whom is our salvation, life, and resurrection; by Whom we are saved and delivered, alleluia, alleluia. (Ps. 66: 2) May God have mercy on us, and bless us; may He cause the light of His countenance to shine upon us, and may He have mercy on us. v. Glory be to the Father and to the Son and to the Holy Ghost, as it was in the beginning, is now and ever shall be, world without end. Amen.

O God, Who dost gladden us this day by the annual solemnity of the exaltation of the Holy Cross, grant, we beseech Thee, that, as we have known its mystery on earth, we may deserve in heaven the reward which it had purchased. Through Jesus Christ, thy Son our Lord, Who liveth and reigneth with thee, in the unity of the Holy Ghost, ever one God, world without end. R. Amen.

Lesson from the Epistle of Blessed Paul the Apostle to the Philippians. Brethren let this mind be in you which was also in Jesus Christ: Who, being in the form of God, thought it not robbery to be equal with God but emptied Himself, taking the form of a servant, being made in the likeness of men, and in habit found as a man. He humbled Himself, becoming obedient even unto death, even to the death of the cross. For which cause God also hath exalted Him, and hath given Him a Name which is above all names: (here all kneel) that in the Name of Jesus every knee should bow,of those that are in Heaven, on earth, and under the earth and that every tongue should confess that the Lord Jesus Christ is in the glory of God the Father.

Christ became cbedient for us unto death: even the death of the cross. V. For which cause also God hath exalted Him and hath given Him a name which is above all names. Alleluia, alleluia. V. Sweet the wood, sweet the nails, sweet the load that hangs thereon: to bear up the King and Lord of Heaven nought was worthy save thou, O holy cross. Alleluia.

At that time: Jesus said to the multitude of the Jews, “Now is the judgment of the world: now shall the prince of this world be cast out. And I, if I be lifted up from the earth, will draw all things to Myself.” (Now this He said, signifying what death He should die.) The multitude answered Him, “We have heard out of the law, that Christ abideth forever: and how sayest Thou, The Son of man must be lifted up? Who is the Son of man?” Jesus therefore said to them, “Yet a little while, the light is among you. Walk whilst you have the light, that the darkness overtake you not. And he that walketh in darkness knoweth not whither he goeth. Whilst you have the light, believe in the light; that you may be the children of light.”

Through the sign of the holy cross, protect Thy people, O Lord, from the snares of all enemies, that we may pay Thee a pleasing service, and our sacrifice be acceptable, alleluia.

Being about to be fed with the body and blood of Jesus Christ our Lord,through Whom the banner of the cross was sanctified, we beseech Thee O Lord, our God, that, as we have had the grace to adore it, so we may forever enjoy the effect of its salutary glory. Through Jesus Christ, thy Son our Lord, Who liveth and reigneth with thee, in the unity of the Holy Ghost, ever one God, world without end.

PREFACE of the Holy Cross

It is truly meet and just, right and for our salvation, that we should at all times and in all places, give thanks unto Thee, O holy Lord, Father almighty, everlasting God Who didst establish the salvation of mankind on the tree of the Cross that whence death came, thence also life might rise again, and that he, who overcame by the tree, by the tree also might be overcome: Through Christ our Lord. Through whom the Angels praise Thy majesty, the Dóminations worship it, the Powers stand in awe. The heavens and the heavenly hosts together with the blessed Seraphim in triumphant chorus unite to celebrate it. Together with these we entreat Thee, that Thou mayest bid our voices also to be admitted while we say with lowly praise:

Through the sign of the cross deliver us from our enemies, O our God.

Be Thou with us, O Lord. our God, and as Thou dost make us rejoice in honor of the holy cross, defend us also by its perpetual assistance. Through Jesus Christ, thy Son our Lord, Who liveth and reigneth with thee, in the unity of the Holy Ghost, ever one God, world without end.