ATHENS, in Greece, was the native city of St. Giles. He was of noble parentage, and devoted himself from early youth to piety and learning. After the death of his parents he distributed his rich inheritance to the poor, and to escape the applause of men for his charity left his country to bury himself in obscurity.   He sailed for France, and on his arrival there retired to a deserted country near the mouth of the river Rhone. Later he made his abode near the river Gard, and finally buried himself in a forest in the diocese of Nimes. In this solitude he passed many years, living on wild herbs and roots, with water for his drink. It is related that for some time a hind came daily to be milked by him, thus furnishing him additional sustenance. Here he lived, disengaged from earthly cares, conversing only with God, and engaged in the contemplation of heavenly things.

One day the king instituted a great hunt in the forest where Giles lived, and encountered the hind. Giving chase, the royal hunter was led to the Saint’s hut, where the panting animal had sought refuge. The king inquired who he was, and was greatly edified at the holiness of his life. The fame of the saintly hermit now spread far and wide, and was much increased by the many miracles wrought through his intercession. The king tried to persuade him to leave his solitude, but prevailed upon him only in so far, that Giles accepted several disciples and founded a monastery in which the rule of St. Benedict was observed, and of which he was chosen the abbot. He governed his community wisely and well, and at the earnest solicitation of his monks was ordained priest.

The fame of St. Giles’ sanctity induced the Frankish King, Charles Martel to call him to his court to relieve him of a great trouble of conscience. The Saint made the journey, and told the king that he would find relief and comfort only by the sincere confession of a sin which he had hitherto concealed. The king followed his advice, found interior peace and dismissed Giles with many tokens of gratitude. On his homeward journey the Saint raised the recently deceased son of a nobleman to life.

After a short stay in his monastery St. Giles went to Rome, to obtain from the Pope the confirmation of some privileges and the apostolic blessing for his community. The Pope granted his wishes, and presented him, besides, with two grand and beautifully carved doors of cedar wood for his church.

St. Giles died at a ripe old age on September 1, 725. Many miracles were wrought at his tomb.

Note: St. Giles is also known as St. Aegidius. He is the patron of cripples and beggars, and is invoked against panic, epilepsy, madness and nocturnal terrors.

ST. GILES left his native country and retired into solitude to escape the notice and applause of the world, and served God as a recluse. To lead such a life, there must be a special call from God. It is not suited to all, and even inconsistent with the duties of most men. But all are capable of disengaging their affections from the inordinate attachment to creatures, and of attaining to a pure and holy love of God. By making the service of God the motive of their thoughts and actions, they will sanctify their whole life.

In whatever conditions of life we may be placed, we have opportunities of subduing our evil inclinations and mortifying ourselves by frequent self-denials, of watching over our hearts and purifying our senses by recollection and prayer. Thus each one, in his station of life, may become a Saint, by making his calling an exercise of virtue and his every act a step higher to perfection and eternal glory. 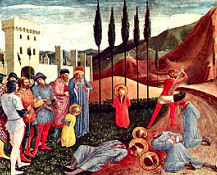 The Twelve Holy Brothers: Africans by birth, these saints were martyred in various places in the third century under the Emperors Diocletian and Maximian. Four were beheaded in Potenza, Italy on August 27. Three were beheaded at Vanossa on August 28. The others were beheaded at Sentiana on September 1. They were brought together and enshrined at Benevento in 760. “Donatus, Felix, Arontius, Honoratus, Fortunatus, Sabinian, Septimius, Januarius, another Felix, Vitalis, Sator, and Repositus.”

May the intercession of blessed Giles, the Abbot, commend us unto Thee, we beseech Thee, O Lord: so that what we may not have by any merits of ours, we may obtain by his patronage. Through our Lord Jesus Christ, Thy Son, Who livest and reignest with Thee in the unity of the Holy Ghost, one God Forever and ever. R. Amen.

Commemoration of the Twelve Holy Brothers
Lord, may the crown thou didst bestow upon the martyred brethren gladden us, bringing increase of virtue to us who believe, and comforting us with their manifold intercession…

Collect of the Souls
From all perils of soul and body defend us, O Lord, we beseech thee, and by the intercession of blessed and gloriosus ever Virgin Mary, Mother of God, of blessed Joseph, of thy blessed apostles Peter and Paul, and of blessed N. and all the Saints, graciously grant us safety and peace that all adversities and errors being overcome, thy Church may serve thee in security and freedom. Through Jesus Christ, thy Son our Lord, Who liveth and reigneth with thee, in the unity of the Holy Ghost, ever one God, world without end. R. Amen.

Lesson from the Book of Ecclesiasticus. Beloved of God, and men: whose memory is in benediction. He made him like the saints in glory, and magnified him in the fear of his enemies, and with his words he made prodigies to cease. He glorified him in the sight of kings, and gave him commandments in the sight of his people, and shewed him His glory. He sanctified him in his faith, and meekness, and chose him out of all flesh. For he heard Him, and His voice, and brought him into a cloud. And He gave him commandments before His face, and a law of life and instruction.

Lord, Thou hast prevented him with blessings of sweetness: Thou hast set on his head a crown of precious stones. V. He asked life of Thee, and Thou hast given him length of days for ever and ever. Alleluia, alleluia. V. (Ps. 91. 13). The just shall flourish like the palm tree: he shall grow up like the cedar of Libanus. Alleluia.

Continuation of the holy Gospel according to St. Matthew. At that time, Peter said to Jesus: Behold we have left all things, and have followed thee: what therefore shall we have? And Jesus said to them: Amen, I say to you, that you, who have followed me, in the regeneration when the Son of man shall sit on the seat of his majesty, you also shall sit on twelve seats, judging the twelve tribes of Israel. And every one that hath left house, or brethren, or sisters, or father, or mother, or wife, or children, or lands, for My Name’s sake, shall receive an hundredfold, and shall possess life everlasting.

Thou hast given him his heart’s desire, O Lord, and hast not withholden from him the will of his lips: Thou hast set on his head a crown of precious stones.

May the holy Abbot Giles, we beseech Thee, O Lord, obtain by his prayers, that the Sacrifice laid on Thy holy altar, may profit us unto salvation. Through our Lord Jesus Christ, Thy Son, who liveth and reigneth with Thee in the unity of the Holy Ghost, God, world without end. R.Amen.

Commemoration of the Twelve Holy Brothers
MAy we perform thy sacramental rite, Lord, in a spirit of devotion, to the honour of thy holy martyrs. May it bring us new help and deeper joy…

Of the souls
Hear us, O God, our salvation that through the power of this Sacrament thou mayest defend us from all enemies of soul and body and bestow upon us grace here and glory hereafter. Through Jesus Christ, thy Son our Lord, Who liveth and reigneth with thee, in the unity of the Holy Ghost, ever one God, world without end. R. Amen.

It is truly meet and just, right and for our salvation that we should at all times and in all places, give thanks unto Thee, O holy Lord, Father almighty, everlasting God: through Christ our Lord. Through Whom the Angels praise Thy Majesty, the Dominations worship it, the Powers stand in awe. The Heavens and the Heavenly hosts together with the blessed Seraphim in triumphant chorus unite to celebrate it. Together with them we entreat Thee, that Thou mayest bid our voices also to be admitted, while we say in lowly praise:
HOLY, HOLY, HOLY…

A faithful and wise steward, whom the Lord set over His family; to give them their measure of wheat in due season.

May the pleading of blessed Giles, the Abbot, for us, as well as the reception of Thy Sacraments, protect us, O Lord, that we may both share in the glory of his works, and receive the help of his intercession. Through our Lord Jesus Christ, Thy Son, Who with Thee liveth and reigneth in the unity of the Holy Ghost, God, world without end. R. Amen.

Commemoration of the Twelve Holy Brothers
Grant, we pray thee, almighty God, that we may evermore steadfastly emulate the faith of those whom we commemorate by partaking of thy sacrament…

Of the souls
May the offering of this divine Sacrament cleanse and protect us, O Lord we beseech thee, and by the intercession of the Blessed Virgin Mary, Mother of God, of blessed Joseph, of thy blessed Apostles Peter and Paul, and of blessed N. and all the Saints, may it purify us from all sin, and free us from all adversity. Through Jesus Christ, thy Son our Lord, Who liveth and reigneth with thee, in the unity of the Holy Ghost, ever one God, world without end. R. Amen.