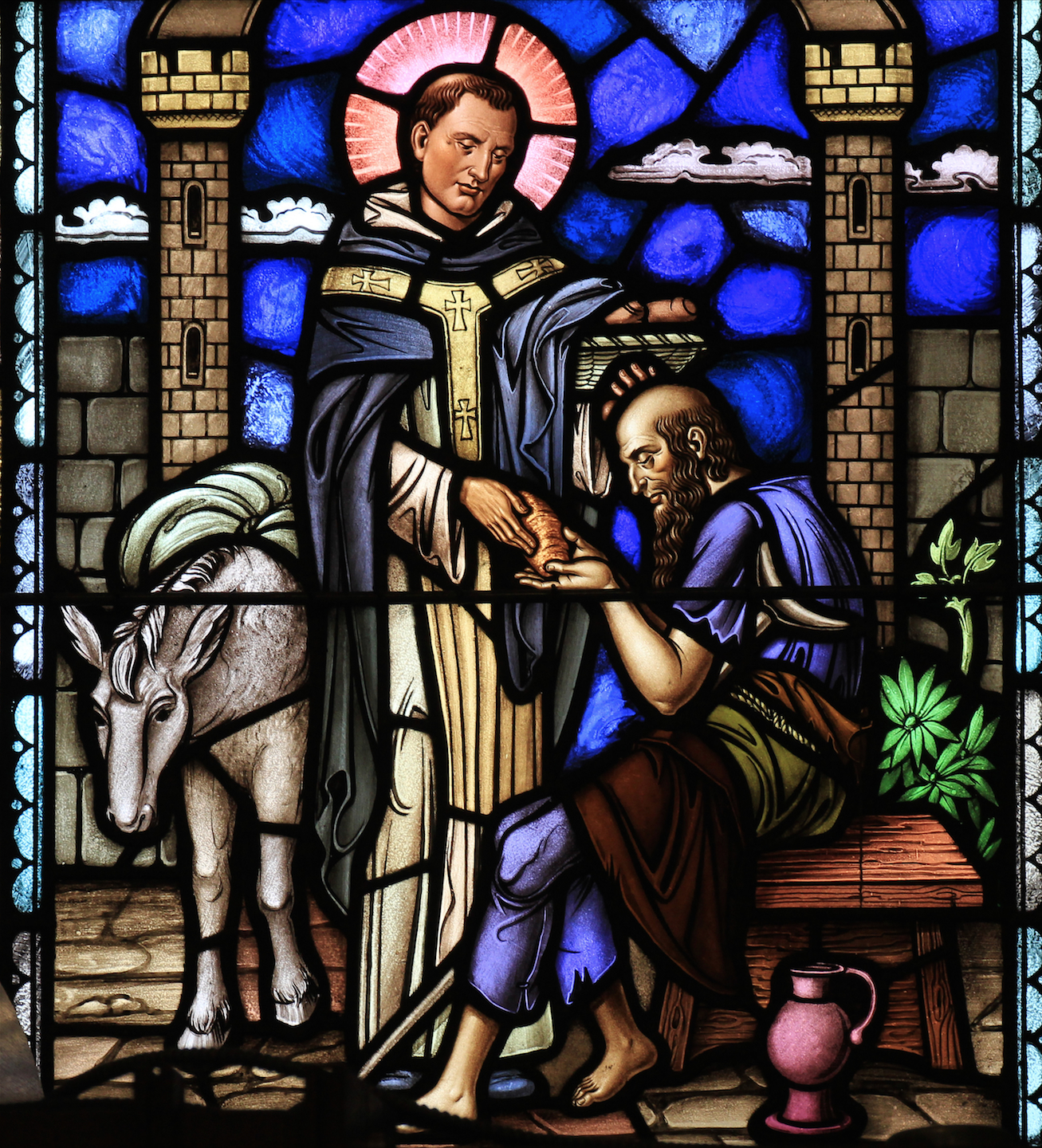 (1389-1459) Saint Antoninus, or Little Antony, as he was called from his small stature, was born at Florence in 1389. After a childhood of singular holiness, he begged to be admitted very young into the Dominican house at Fiesole; but the Superior, to test his sincerity and perseverance, told him he must first learn by heart the book of the Decretals, or Canon Law, containing several hundred pages. This apparently impossible task was accomplished within twelve months; and Antoninus received the coveted habit in his sixteenth year.

While still young, he filled several important posts of his Order and was consulted on questions of difficulty by the most learned men of his day, being known because of his wonderful prudence, as the Counselor. He wrote several works on theology and history and served as Papal Theologian at the Council of Florence. In 1446 he was compelled to accept the archbishopric of that city. In this dignity he earned for himself the title of the Father of the Poor, for all he had was at their disposal. Saint Antoninus never refused an alms which was asked in the name of God. When he had no money, he gave his clothes, shoes, or furniture.

One day, being sent by the Florentines to the Pope, as he approached Rome a beggar came up to him almost naked, and asked him for an alms for Christ’s sake. Outdoing Saint Martin, Antoninus gave him his whole cloak. When he entered the city, another one was given him; by whom, he knew not. His household consisted of only six persons; his palace contained no plate or costly furniture, and was often nearly destitute of the necessities of life. His one mule was frequently sold for the relief of the poor, but was ordinarily bought back for him again by some wealthy citizen.

Saint Antoninus died on May 2, 1459, kissing the crucifix, and repeating the words, To serve God is to reign.

SS Gordianus & Epimachus These two holy martyrs are named in all calendars of the western church since the sixth age. St. Epimachus suffered at Alexandria under Decius, in the year 250, with one Alexander. They had been long detained in a hideous dungeon, were beaten with clubs, their sides were torn with iron-hooks; lastly, they were both burnt in lime. This is related by St. Dionysius of Alexandria, quoted by Eusebius (b. vi. c. 41.) 1

St. Gordian was beheaded at Rome for the faith, under Julian the Apostate, in the year 362. His name occurs in the ancient Martyrologies. His body was laid in a cave, in which was deposited that of St. Epimachus, which was brought from Alexandria to Rome a little before St. Gordian’s martyrdom. The relics of both these martyrs are now possessed by the great Benedictine abbey of Kempten, in the diocese of Augsburg.

O Lord, may the merits of St. Antoninus, Your Confessor and Bishop, help us; and just as we praise You for the wonders You have wrought in him, so may we glory in Your mercy toward us. Through Jesus Christ, thy Son our Lord, Who liveth and reigneth with thee, in the unity of the Holy Ghost, ever one God, world without end. R. Amen.

Commemoratio Dominica IV Post Pascha
O God, of Whom it cometh that the minds of thy faithful people be all of one will, grant unto the same thy people that they may love the thing which Thou commandest, and desire that which Thou dost promise, that so, amid the sundry and manifold changes of the world, our hearts may surely there be fixed, where true joys are to be found.

For SS Gordianus & Epimachus
Grant, we beseech Thee, O almighty God, that we who keep the festival of Thy holy martyrs Gordian and Epimachus, may be assisted by their intercession with Thee. Through Jesus Christ our Lord, Who liveth and reigneth with Thee in the unity of the Holy Ghost, one God Forever and ever. R.Amen.

Lesson from the book of Ecclesiasticus. Behold, a great priest, who in his days pleased God, and was found just; and in the time of wrath he was made a reconciliation. There was not found the like to him, who kept the law of the Most High. Therefore, by an oath, the Lord made him to increase among his people. He gave him the blessing of all nations, and confirmed His covenant upon his head. He acknowledged him in His blessings; He preserved for him His mercy; and he found grace before the eyes of the Lord. He glorified him in the sight of kings, and gave him a crown of glory. He made an everlasting covenant with him, and gave him a great priesthood; and made him blessed in glory. To execute the office of the priesthood, and to have praise in His name, and to offer Him a worthy incense for an odor of sweetness.

Alleluia, alleluia. Ps. 109:4 You are a priest forever, according to the order of Melchisedec. Alleluia. V. This is the priest whom the Lord has crowned. Alleluia.

I have found David, My servant; with My holy oil I have anointed him, that My hand may be always with him, and that My arm may make him strong. Alleluia, allleluia.

May Your Saints, we beseech You, O Lord, everywhere make us joyful: so that, while we reflect upon their merits, we may enjoy their help. Through Jesus Christ, thy Son our Lord, Who liveth and reigneth with thee, in the unity of the Holy Ghost, ever one God, world without end. R. Amen.

Commemoratio Dominica IV Post Pascha
O God, who by the august communion of this sacrifice hast make us partakers of one Sovereign Godhead, grant we beseech thee, that as we know thy truth, so we may follow it up by worthy behavior.

For SS Gordianus & Epimachus
We beg, O lOrd, that the sacrifice we offer in memory of the birthday of thy holy Martyrs may losen the bonds of our sins and win for us the gist of thy mercy. Through our Lord Jesus Christ Thy Son our Lord, Who liveth and reigneth with Thee in the unity of the Holy Ghost, one God Forever and ever. R. Amen.

It is truly meet and just, right and for our salvation, at all times to praise Thee, O Lord, but more gloriously especially in this season when Christ our Pasch was sacrificed. For He is the Lamb Who hath taken away the sins of the world: Who by dying hath destroyed our death: and by rising again hath restored us to life. And therefore with Angels and Archangels, with Thrones and Dominations, and with all the hosts of the heavenly army, we sing the hymn of Thy glory, evermore saying: HOLY, HOLY, HOLY…

The faithful and prudent servant whom the master will set over his household to give them their ration of grain in due time. Alleluia, alleluia.

Grant, we beseech You, almighty God, that as we thank You for the favors we have received, we may, by the intercession of blessed Antoninus, Your Confessor and Bishop, obtain still greater blessings. Through Jesus Christ, thy Son our Lord, Who liveth and reigneth with thee, in the unity of the Holy Ghost, ever one God, world without end. R. Amen.

Commemoratio Dominica IV Post Pascha
Stand by us, O Lord, our God, that by what we have faithfully received we may be cleansed from our vices and rescued from all dangers.

For SS Gordianus & Epimachus
Having taken our fill of thy sacred gift we humbly entreat thee, O Lord, that for the due service which we pay thee, we may enjoy an increase of thy saving grace. Through Our Lord Jesus Christ, Thy Son, Who liveth and reigneth with Thee in the unity of the Holy Ghost, one God For ever and ever. R. Amen.

At that time: Jesus said to His disciples: I go to him that sent me, and none of you asketh me: Whither goest thou? But because I have spoken these things to you, sorrow hath filled your heart. But I tell you the truth: it is expedient to you that I go: for if I go not, the Paraclete will not come to you; but if I go, I will send him to you. And when he is come, he will convince the world of sin, and of justice, and of judgement. Of sin: because they believed not in me. And of justice: because I go to the Father; and you shall see me no longer. And of judgement: because the prince of this world is already judged. I have yet many things to say to you: but you cannot bear them now. But when he, the Spirit of truth, is come, he will teach you all truth. For he shall not speak of himself; but what things soever he shall hear, he shall speak; and the things that are to come, he shall shew you. He shall glorify me; because he shall receive of mine, and shall shew it to you.