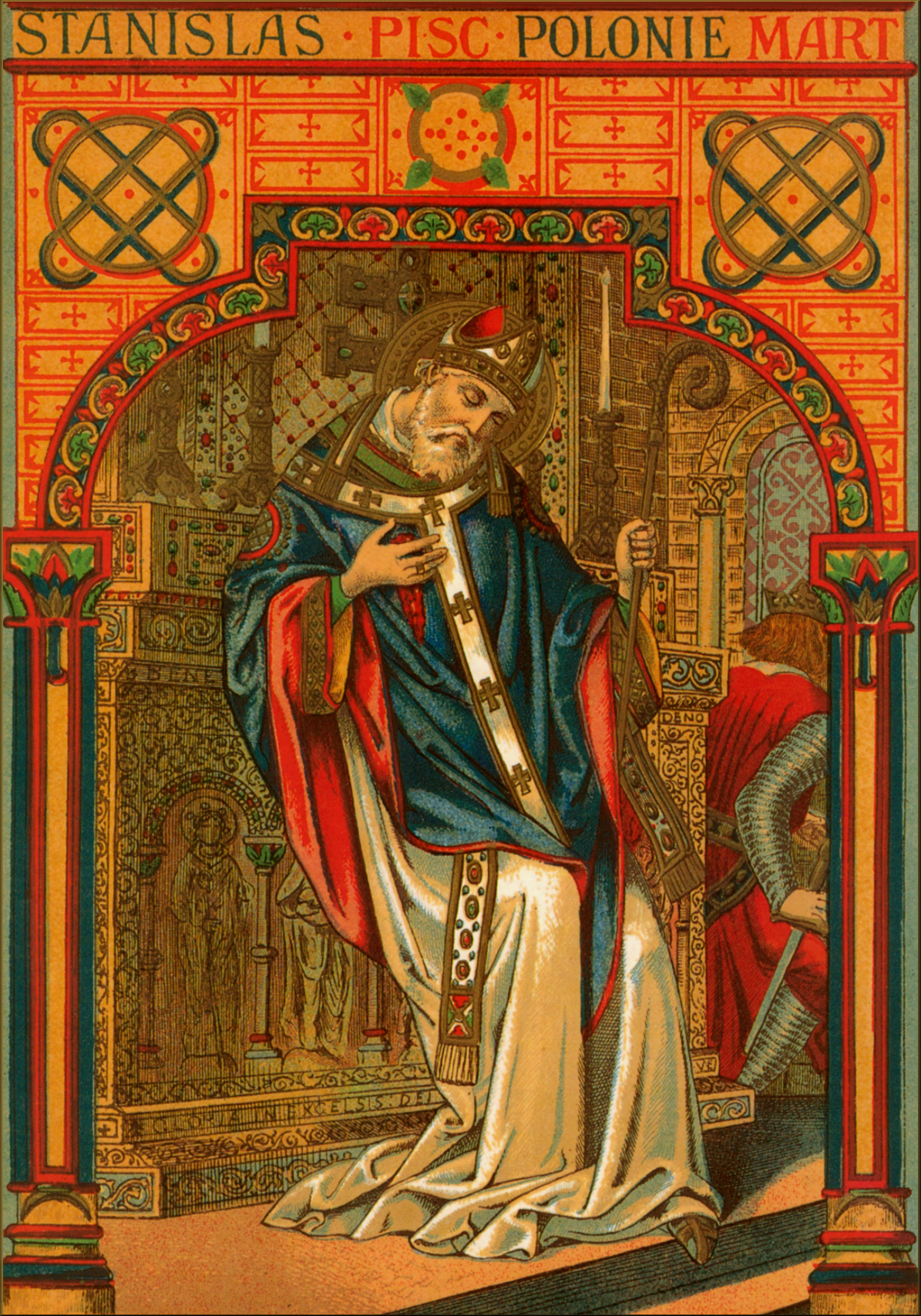 Saint Stanislaus, a Polish martyr, was Bishop of Cracow. King Boleslaw II was outraging the whole kingdom by his acts of lust and cruelty. St. Stanislaus, finding all remonstrances useless, excommunicated him. By order of the king he was cut in pieces at the foot of the altar while celebrating High Mass on the feast of the Apparition of St. Michael in the oratory of the Holy Archangel on the outskirts of Cracow. As, however, that day has been dedicated from the early Middle Ages to St. Michael, when the feast of the martyred bishop was introduced into the Calendar of the Universal Church by Pope Clement VIII, it was kept in anticipation on the eve of his death.

St. Stanislaus was actually born in answer to prayer, when his parents were advanced in age. Out of gratitude they educated him for the Church. When his parents died, he sold their vast properties and gave the price to the poor. He was ordained, and being a holy priest, soon afterwards became a Canon of the Cracow cathedral.

It was necessary to have recourse to the Pope to have him accept the see of Cracow when it became vacant. But the bishop of Cracow’s virtues increased with his dignity and obligations; St. Stanislaus donned a hair shirt, which he wore until he died. He had a list drawn up of every poor person of the city, and gave orders to his servants never to refuse anything to anyone.

Boleslaus II was at that time King of Poland; he was a prince of good disposition, but spoiled by a long series of victories and successes. After many acts of lust and cruelty, he outraged the whole kingdom by carrying off the wife of one of his nobles. Against this public scandal the chaste and gentle bishop alone raised his voice. Having commended the matter to God, he went to the palace and openly rebuked the king for his crime against God and his subjects, and threatened to excommunicate him if he persisted in his sin. Boleslaus, with the intention of irrevocably ruining the bishop’s good reputation, suborned the nephews of a man named Paul who had recently died, to swear that their uncle had never been paid for land which the bishop had bought for the Church. Stanislaus stood fearlessly before the king’s tribunal, though all his frightened witnesses forsook him, and guaranteed to bring the dead man to witness in his favor within three days.

On the third day, after many prayers and tears, he raised the dead man to life and led him in his grave-clothes before the king, where Paul testified that the bishop had reimbursed him fully for the terrain he had sold. He was then taken back to the grave, where he lay down and again relapsed into his former state, before a large number of witnesses.

Boleslaus for a while made a show of a better life. Soon, however, he returned to the most scandalous excesses, and the bishop, finding all remonstrance useless, pronounced the sentence of excommunication. In defiance of the censure, on May 8, 1079, the king went to a chapel where St. Stanislaus was saying Mass and commanded three groups of soldiers in succession to slay him at the altar. Each in turn came out, saying he had been alarmed by a light from Heaven. At this the king himself rushed in and slew with his own hand the Saint at the altar during the Holy Sacrifice.

The holy Pope St. Gregory VII placed the kingdom of Poland under interdict, excommunicated the king and declared his royalty null and void. Boleslaus repented, took refuge in another country for a time, then set out dressed as a pilgrim for Rome. On the way he knocked on a monastery door to ask for an alms, then decided to enter there anonymously, and was received. He spent seven years there as a Benedictine lay brother, rendering every humble service to the monks, patiently bearing rude treatment. Only on his deathbed did he identify himself, taking out his royal ring which he had concealed until then. He had spent hours praying before a statue of Our Lady in the chapel, by which we may conclude that the Mother of God had obtained for him the grace of conversion and a happy death. His body remains in the church of the same monastery of Ossiach. He was canonized by Pope Innocent IV in 1253.

O God, for Whose honor Stanislaus, the glorious bishop, fell by the sword of the impious, grant, we beseech Thee, that all who implore his aid may obtain the salutary effect of their petition. Through our Lord Jesus Christ, Thy Son, Who livest and reignest with Thee in the unity of the Holy Ghost, one God Forever and ever.
R.Amen.

In that time: the Lord appointed also other seventy-two: and he sent them two and two before his face into every city and place whither he himself was to come. And he said to them: The harvest indeed is great, but the labourers are few. Pray ye therefore the Lord of the harvest, that he send labourers into his harvest. Go: Behold I send you as lambs among wolves. Carry neither purse, nor scrip, nor shoes; and salute no man by the way. Into whatsoever house you enter, first say: Peace be to this house. And if the son of peace be there, your peace shall rest upon him; but if not, it shall return to you. And in the same house, remain, eating and drinking such things as they have: for the labourer is worthy of his hire. Remove not from house to house. And into what city soever you enter, and they receive you, eat such things as are set before you. And heal the sick that are therein, and say to them: The kingdom of God is come nigh unto you.

Sanctify, O Lord, the gifts dedicated to Thee, and by the intercession of blessed Stanislaus, Thy martyr and bishop, look upon them with approval. Through our Lord Jesus Christ, Thy Son, Who liveth and reigneth with Thee in the unity of the Holy Ghost, one God Forever and ever.
R.Amen.

May this communion, O Lord, purge us of guilt, and, by the intercession of blessed Stanislaus, Thy martyr and bishop, may it make us sharers of the Heavenly healing. Through our Lord Jesus Christ, Thy Son, Who liveth and reigneth with Thee in the unity of the Holy Ghost, one God Forever and ever.
R. Amen.