St Blaise: Many Catholics might remember Saint Blaise’s feast day because of the Blessing of the Throats that took place on this day. Two candles are blessed, held slightly open, and pressed against the throat as the blessing is said. Saint Blaise’s protection of those with throat troubles apparently comes from a legend that a boy was brought to him who had a fishbone stuck in his throat. The boy was about to die when Saint Blaise healed him.

Very few facts are known about Saint Blaise. We believe he was a bishop of Sebastea in Armenia who was martyred under the reign of Licinius in the early fourth century.

The legend of his life that sprang up in the eighth century tell us that he was born in to a rich and noble family who raised him as a Christian. After becoming a bishop, a new persecution of Christians began. He received a message from God to go into the hills to escape persecution. Men hunting in the mountains discovered a cave surrounded by wild animals who were sick. Among them Blaise walked unafraid, curing them of their illnesses. Recognizing Blaise as a bishop, they captured him to take him back for trial. On the way back, he talked a wolf into releasing a pig that belonged to a poor woman. When Blaise was sentenced to be starved to death, the woman, in gratitude, sneaked into the prison with food and candles. Finally Blaise was killed by the governor.

Blaise is the patron saint of wild animals because of his care for them and of those with throat maladies. Before being martyred, he is said to have healed a boy who was choking. Since the eighth century, Saint Blaise has been venerated as the patron of those who suffer from diseases of the throat. We pray in a special way today for protection from afflictions of the throat and from other illnesses. The blessing of Saint Blaise is a sign of our faith in God’s protection and love for us and for the sick.

With the crossed candles touched to the throat of each person, the celebrant says immediately:

Through the intercession of Saint Blaise, bishop and martyr, may God deliver you from every disease of the throat and from every other illness: 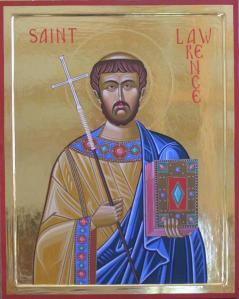 St Laurence: He was one of those who accompanied St. Austin into this island, about the year 597, and was his immediate successor in the see of Canterbury, in 608, in which he sat eleven years. When Eadbald, son and successor to the holy king Ethelbert, not only refused to follow his father’s example in embracing the faith, but gave into idolatry, and incestuously took to his bed his father’s widow, Laurence having labored hard for his conversion to no purpose, and despairing of reclaiming him, thought of nothing but retiring to France, as some others had already done. But he was severely scourged by St. Peter, in a dream, on the eve of his intended departure, with reproaches for designing to forsake that flock for which Christ had laid down his life. This did not only prevent his going, but had such an effect upon the king, when he was shown the marks of the stripes he had received on this occasion, that he became a thorough convert, doing whatever was required of him, both for his own sanctification, and the propagation of Christianity in his dominions. St. Laurence did not long survive this happy change, dying in the year 619. He is mentioned in the Roman Martyrology.

O God, Who gladden us with the yearly festival of blessed Blaise, Your Martyr and Bishop, mercifully grant that, as we venerate the anniversary of his martyrdom, we may also rejoice in his protection. Through Jesus Christ, thy Son our Lord, Who liveth and reigneth with thee, in the unity of the Holy Ghost, ever one God, world without end. R. Amen.

Commemoration S. Lawrence of Canterbury
Grant, we beseech Thee, O almighty God, that the august solemnity of Thy blessed confessor and pontiff, Laurence, may increase our devotion and promote our salvation. Through the same Lord Jesus Christ, Thy Son, Who liveth and reigneth with Thee in the unity of the Holy Ghost, one God Forever and ever. R.Amen.

You crowned him with glory and honor. V. You have given him rule over the works of Your hands, O Lord. Ps 111:1-3 Happy the man who fears the Lord, who greatly delights in His commands. V. His posterity shall be mighty upon the earth; the upright generation shall be blessed. V. Wealth and riches shall be in his house; his generosity shall endure forever.

At that time, Jesus said to His disciples, If anyone wishes to come after Me, let him deny himself, and take up his cross, and follow Me. For he who would save his life will lose it; but he who loses his life for My sake will find it. For what does it profit a man, if he gain the whole world, but suffer the loss of his own soul? For the Son of Man is to come with His angels in the glory of His Father, and then He will render to everyone according to His conduct.been faithful over a few things, I will set you over many; enter into the joy of your master.’

Sanctify the offerings dedicated to You, O Lord, and through the intercession of blessed Blaise, Your Martyr and Bishop, look upon us with mercy because of them. Through Jesus Christ, thy Son our Lord, Who liveth and reigneth with thee, in the unity of the Holy Ghost, ever one God, world without end. R. Amen.

Commemoration of S Lawrence
By the offered gifts we beseech thee, O Lord, that thou kindly enlighten thy Church, so that thy flock may everywhere progress and prosper, and thy shepherds, under thy guidance may be pleasing to thy name. Through Jesus Christ, thy Son our Lord, Who liveth and reigneth with thee, in the unity of the Holy Ghost, ever one God, world without end. R. Amen.

May this Communion, O Lord, cleanse us of sin, and through the intercession of blessed Blaise, Your Martyr and Bishop, may it make us sharers of heavenly healing. Through Jesus Christ, thy Son our Lord, Who liveth and reigneth with thee, in the unity of the Holy Ghost, ever one God, world without end. R. Amen.

Commemoration of S Lawrence
Being appeased, O Lord, guide thy Church, which has been nourished by holy refreshment, that under thy direction and powerful rule it may receive increase of liberty and may continue in religious integrity. Through Jesus Christ, thy Son our Lord, Who liveth and reigneth with thee, in the unity of the Holy Ghost, ever one God, world without end. R. Amen.