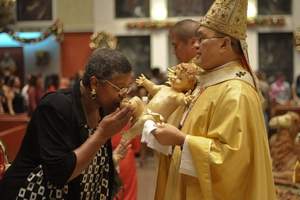 Third Mass of the Nativity of Our Lord: Missa “Puer natus”

This third Mass during the day on Christmas Day returns to the major Station at St. Mary Major and we hear in the Epistle from St. Paul that it was by the Word that God made the world. Let the nations and kings come and adore Him. If the Angels fall down and worship Him, can we do any less. We kneel and do just that during the very Gospel – the Last Gospel – we hear at every Mass for it is the main Gospel on this day: that of John 1: 1-14, for indeed “The Word was made flesh.” The ET VERBUM CARO FACTUM EST completes the prophecies of the Old Testament for the promised Infant God-man has indeed come and the Redemption accomplished by Christ at His first coming will be completed by Him at the end of time when He comes again. The Last Gospel for this Mass only is that of Matthew 2: 1-2, that of his account of the Magi. During this Holy Mass of the Day, every priest celebrates Mass for those of his parish.

A Child is born to us, and a Son is given to us: Whose government is upon His shoulder and His Name shall be called, the Angel of Great Counsel. (Ps. 97: 1) Sing ye to the Lord a new canticle: for He hath done wonderful things. v. Glory be to the Father and to the Son and to the Holy Ghost, as it was in the beginning, is now and ever shall be, world without end. Amen.
Repeat A Child is born…

O God, who hast made this most holy night to shine forth with the splendor of the true Light: grant, we beseech Thee, that we, who have known the mysteries of His life on earth, may enjoy also His happiness in Heaven. Who with Thee liveth and reigneth, in the unity of the Holy Ghost, God,
world without end.
R.Amen.

Lesson from the Epistle of Blessed Paul, the Apostle to the Hebrews. God, Who at sundry times and in divers manners spoke in times past to the fathers by the prophets, last of all in these days hath spoken to us by His Son, whom He hath appointed heir of all things, by whom also He made the world: Who being the brightness of His glory and the figure of His substance, and upholding all things by the word of His power, making purgation of sins, sitteth on the right hand of the Majesty on high: being made so much better than the angels, as He hath inherited a more excellent name than they. For to which of he angels hath He said at any time: I will be to Him a Father, and He shall be to Me a Son? And again, when He bringeth in the first begotten into the world, He saith: And let all the angels of God adore Him. And to the angels indeed He saith: He that maketh His angels spirits, and His ministers a flame of fire. But to the Son: Thy throne, O God, is for ever and ever: a scepter of justice is the scepter of Thy kingdom. Thou hast loved justice and hated iniquity: therefore God, Thy God, hath anointed Thee with the oil of gladness above Thy fellows. And: Thou in the beginning, O Lord, didst found the earth: and the works of Thy hands are the heavens. They shall perish, but Thou shalt continue: and they shall all grow old as a garment: and as a vesture shalt Thou change them and they shall be changed: but Thou art the self-same, and Thy years shall not fail.

All the ends of the earth have seen the salvation of our God: sing joyfully to God, all the earth. V. The Lord hath made known His salvation: He hath revealed His justice in the sight of the Gentiles. Alleluia, alleluia. V. A sanctified day hath shown upon us: come ye Gentiles and adore the Lord: for this day a great light hath descended upon the earth. Alleluia.

In the beginning was the Word, and the Word was with God, and the Word was God. The same was in the beginning with God. All things were made by Him, and without Him was made nothing that was made: in Him was life, and the life was the Light of men; and the Light shineth in darkness, and the darkness did not comprehend it. There was a man sent from God, whose name was John. This man came for a witness, to testify concerning the Light, that all might believe through Him. He was not the Light, be he was to testify concerning the Light. That was the true Light, which enlighteneth every man that cometh into this world. He was in the world, and the world was made by Him, and the world knew Him not. He came unto His own, and His own received Him not. But as many as received Him to them He gave power to become sons of God, to them that believe in His Name, who are born not of blood, nor of the will of the flesh, nor of the will of man, but of God. Here all kneel AND THE WORD WAS MADE FLESH, and dwelt among us: and we saw His glory, the glory as of the Only begotten of the Father, full of grace and truth.

Thine are the heavens, and thine is the earth, the world and the fullness thereof Thou hast founded: justice and judgment are the preparation of Thy Throne.

Sanctify, O Lord, the gifts offered to Thee, by the new birth of Thine Only-begotten Son: and cleanse us from the stains of our sins. Through the same Lord Jesus Christ Thy Son, Who liveth and reigneth with Thee in the unity of the Holy Ghost, one God Forever and ever.
R.Amen.

Communicating, and keeping this most holy day, in which the spotless virginity of blessed Mary brought forth a Savior to this world and also reverencing the memory of the same glorious Mary, ever Virgin Mother of the same our God and Lord Jesus Christ: as also blessed Joseph, Spouse of the Virgin, of the blessed Apostles and Martyrs Peter and Paul, Andrew, James, John, Thomas, James, Philip, Bartholomew, Matthew, Simon and Thaddeus: Linus, Cletus, Clement, Xystus, Cornelius, Cyprian, Lawrence, Chrysogonus, John and Paul, Cosmas and Damian, and of all Thy Saints, through whose merits and prayers, grant that we may in all things be defended by the help of Thy protection (He joins his hands.) Through the same Christ our Lord. Amen.

All the ends of the earth have seen the salvation of our God.

Grant, we beseech Thee, almighty God, that as the Savior of the world, born on this day, is the Author of our heavenly birth, so He may also be to us the Giver of immortality. Who liveth and reigneth with Thee in the unity of the Holy Ghost, God,
For ever and ever.
R. Amen.

When Jesus was born in Bethlehem of Juda in the days of King Herod, behold there came wise men from the East to Jerusalem, saying: Where is He that is born king of the Jews? For we have seen His star in the East, and are come to adore Him. And King Herod hearing this was troubled, and all Jerusalem with him. And assembling together all the chief priests and the scribes of the people, he inquired of them where Christ should be born. But they said to him: In Bethlehem of Juda. For so it is written by the Prophet. And thou Bethlehem, the land of Juda, art not the least among the princes of Juda: for out of thee shall come forth the Captain that shall rule My people Israel. Then Herod, privately calling the wise men, learned diligently of them the time of the star which appeared to them: and sending them into Bethlehem, said: Go and diligently inquire after the Child, and when you have found Him, bring me word again, that I may also come and adore Him. Who having heard the king went their way. And behold the star, which they had seen in the East, went before them until it came and stood over where the Child was. And seeing the star they rejoiced with exceeding great joy. And entering into the house, they found the Child with Mary His Mother, (here genuflect) and falling down they adored Him. And opening their treasures, they offered Him gifts, gold, frankincense, and myrrh. And having received an answer in sleep that they should not return to Herod, they went back another way into their country.