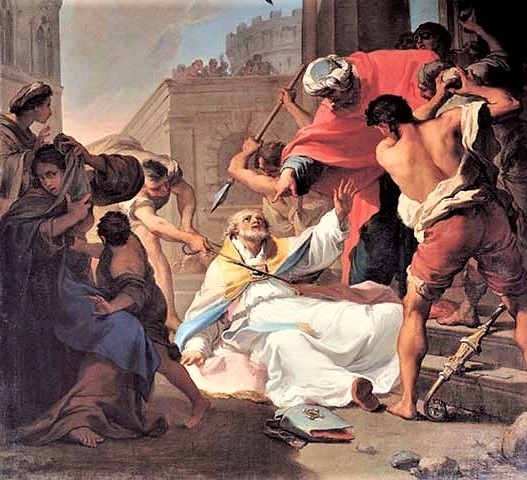 Christians who breathed a sigh of relief when Constantine proclaimed Christianity the state religion, believing this would end the bloodshed and martyrdom. But it was all too short a time until they were facing persecution once more — from others who claimed to be Christian.

When Christianity became the state religion, many people adopted it for political reasons. Others adopted it without truly understanding it. Under these circumstances heresy found fertile ground. One of the most powerful heresies was Arianism which claimed that Jesus was not God (a heresy that has never completely died out). The Arians were powerful people, including nobles, generals, emperors. They commanded armies and senates. True Christianity was in real danger of being stamped out once again.

Eusebius had learned how to stand as a Christian from his father, who died a martyr in Sardinia. After his father’s death, he grew up in Rome where he was ordained a lector. This was a time when bishops were elected by the people and local clergy. When the people of Vercelli saw how well he served their Church, they had no doubt about choosing him as bishop.

Pope Liberius also noticed his abilities and sent him on a mission to the Emperor Constantius to try to resolve the troubles between Arians and Catholics. Seeming to agree, Constantius convened a council in Milan in 355. The powerful Arians however weren’t there to talk but to force their own will on the others. A horrified Eusebius watched as his worst fears were confirmed and the Arians made this peace council into a condemnation of Saint Athanasius, their chief opponent. Eusebius, unafraid of their power, slapped the Nicene Creed down on the table and demanded that everyone sign that before condemning Athanasius. The Nicene Creed, adopted by a council of the full Church, proclaims that Jesus is one in being with the Father — directly contradicting the Arian teaching.

The emperor then tried to force Eusebius, Saint Dionysius of Milan, and Lucifer of Cagliari to condemn Athanasius under pain of death. They steadfastly refused to condemn a man who far from being a heretic was supporting the truth. Instead of putting them to death, the emperor exiled them.

In exile in Scythopolis in Palestine, Eusebius lived with the only Catholic in town. Any comfort he had from visits of other saints was destroyed when the local Arians stripped him half naked and dragged him through the streets to a tiny cell. The Arians finally let him go after he spent four days without food. But a few weeks later they were back, breaking into his house, stealing his belongings and food, and imprisoning him again.

Eusebius was exiled to two other places before Constantius’ successor Julian let him and the other exiled bishops return home in 361. The problem was not over and Eusebius spent his last years working hard to counteract the damage the Arians had done and continued to do. After working with Athanasius and taking part in councils, he became a latter-day Saint Paul traveling all over in order to strengthen the faith and spread the truth. Eusebius died on August 1, 371.

O God, Who gladden us with the yearly festival of blessed Eusebius, Your Martyr and Bishop, mercifully grant that, as we venerate the anniversary of his martyrdom, we may also rejoice in his protection. Through Jesus Christ, thy Son our Lord, Who liveth and reigneth with thee, in the unity of the Holy Ghost, ever one God, world without end.
R. Amen.

Commemoratio Sabbato infra Hebdomadam III Adventus
Lend Your ear to our prayers, O Lord, we beseech You; and brighten the darkness of our minds by the grace of Your coming. Who livest and reignest with God the Father, in the unity of the Holy Spirit, one God, world without end.
R. Amen

Lesson from the second letter of St Paul the Apostle to the Corinthians: Brethren: Blessed be the God and Father of our Lord Jesus Christ, the Father of mercies and the God of all comfort, Who comforts us in all our afflictions, that we also may be able to comfort those who are in any distress by the comfort wherewith we ourselves are comforted by God. For as the sufferings of Christ abound in us, so also through Christ does our comfort abound. For whether we are afflicted, it is for your instruction and salvation; or whether we are comforted, it is for your comfort; which shows its efficacy in the endurance of the selfsame sufferings that we also suffer. And our hope for you is steadfast, knowing that as you are partakers of the sufferings, so will you also be of the comfort, in Christ Jesus our Lord.

Thou hast crowned him with glory and honor. V. And hast set him over the works of Thy hands, O Lord. Alleluia, alleluia. V. This is the priest whom the Lord hath crowned. Alleluia.

At that time, Jesus said to His disciples: ‘If any man will come after Me, let him deny himself and take up his cross and follow Me. For he that will save his life shall lose it : and he that shall lose his life for My sake shall find it. For what doth it profit a man if he gain the whole world and suffer the loss of his own soul? Or what exchange shall a man give for his soul? For the Son of man shall come in the glory of His Father with His angels: and then will He render to every man according to his works.’

I have found David My servant, with My holy oil I have anointed him; for my hand shall help him, and My arm shall strengthen him.

Sanctify the offerings dedicated to You, O Lord, and through the intercession of blessed Eusebius, Your Martyr and Bishop, look upon us with mercy because of them. Through Jesus Christ, thy Son our Lord, Who liveth and reigneth with thee, in the unity of the Holy Ghost, ever one God, world without end.
R. Amen.

Commemoratio Sabbato infra Hebdomadam III Adventus
We beseech You, O Lord, that the gift we dedicate to You, may be sacrificed continually, so that the sacramental rite You have ordained may be fully observed, and the work of Your salvation may be wonderfully effective within us. Through Jesus Christ, thy Son our Lord, Who liveth and reigneth with thee, in the unity of the Holy Ghost, ever one God, world without end.
R. Amen.

It is truly meet and just, right and for our salvation that we should at all times and in all places, give thanks unto Thee, O holy Lord, Father almighty, everlasting God: through Christ our Lord. Through Whom the Angels praise Thy Majesty, the Dominations worship it, the Powers stand in awe. The Heavens and the Heavenly hosts together with the blessed Seraphim in triumphant chorus unite to celebrate it. Together with them we entreat Thee, that Thou mayest bid our voices also to be admitted, while we say in lowly praise:
HOLY, HOLY, HOLY…

Thou has set on his head, O Lord, a crown of precious stones.

May this Communion, O Lord, cleanse us of sin, and through the intercession of blessed Eusebius, Your Martyr and Bishop, may it make us sharers of heavenly healing. Through Jesus Christ, thy Son our Lord, Who liveth and reigneth with thee, in the unity of the Holy Ghost, ever one God, world without end.
R. Amen.

Commemoratio Sabbato infra Hebdomadam III Adventus
We entreat You, merciful Lord, that these divine helps may cleanse us from our sins and prepare us for the coming festal season. Through Jesus Christ, thy Son our Lord, Who liveth and reigneth with thee, in the unity of the Holy Ghost, ever one God, world without end.
R. Amen.