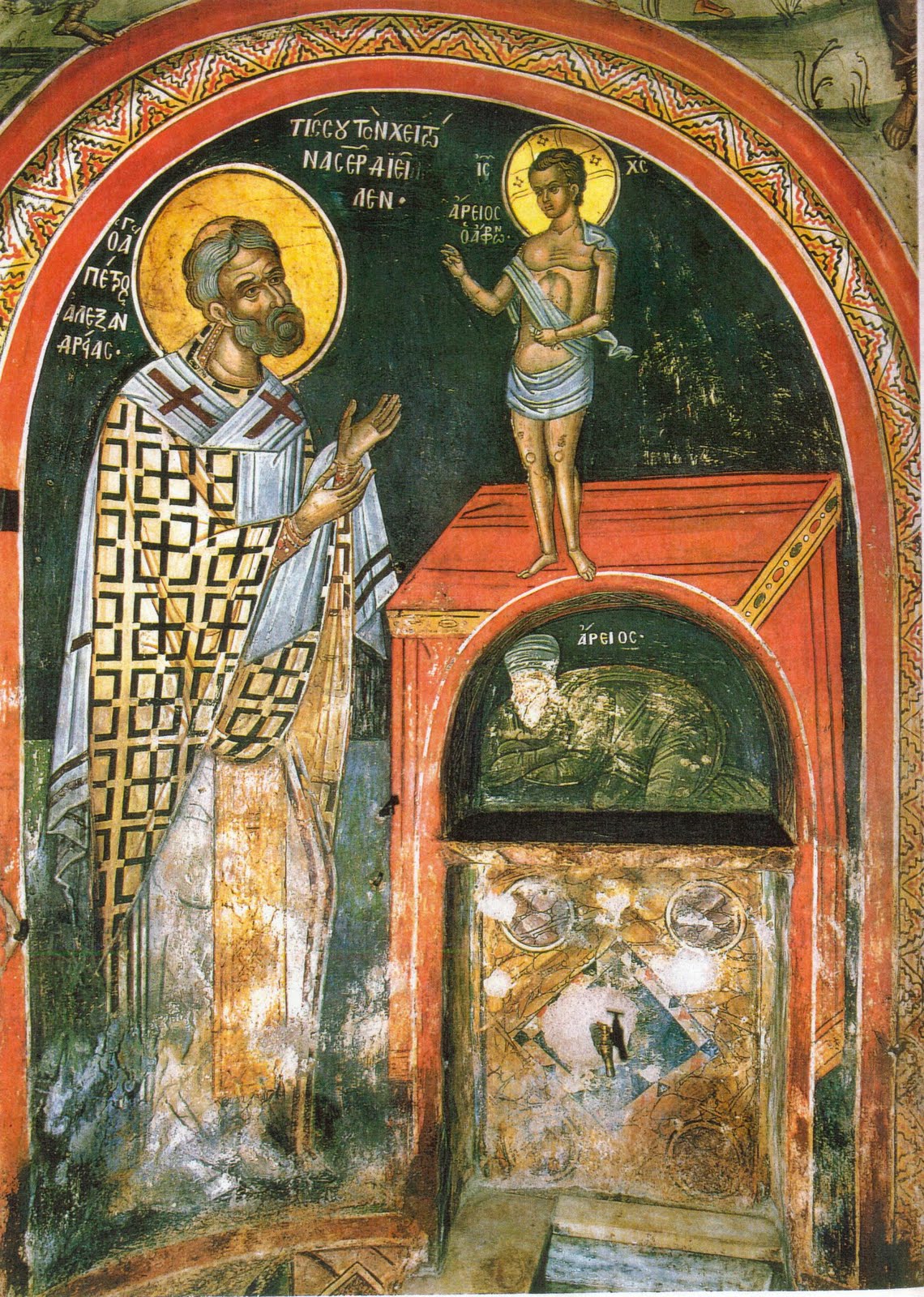 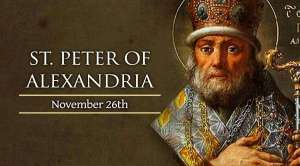 The Holy Hieromartyr Peter of Alexandria was the head of the Catechetical School of Alexandria and was Archbishop of the Church of Alexandria during the rise of the the Arian heresy during the early years of the fourth century. He was the last martyr to suffer at Alexandria under the persecution of Diocletian (311) and therefore the Greeks give him the honorable title of “the seal and limit of the persecution.” He was an admirable example of a bishop.

St Peter’s birth and early life is largely known. He is believed to have grown up under the tutelage of Archbishop Theonas, Peter’s predecessor as Archbishop of Alexandria. Peter led the Catechetical School of Alexandria which at the time was the center of theology of the Church. Peter was chosen as the Archbishop of Alexandria in the year 300 upon the death of his mentor, Theonas, who had recommended Peter to the church leaders as his successor.

Three years later, in 303, the persecutions of Roman Emperor Diocletian began. With the rise of the persecutions, Peter established rules in Alexandria for the re-admittance, after appropriate penance, to the church of those who lapsed from the faith. His rules brought opposition from those extremists, led by Meletius, Bishop of Lycopolis, who thought them too lenient. In 306, Peter was forced to leave Alexandria due to renewal of the persecutions by the Romans. During the time he was in hiding, Meletius usurped Peter’s position as bishop of Alexandria and began to consecrate his followers as bishops, even to sees of standing bishops who were in prison for defending their Faith. Among Meletius’ ordinations was that of Arius, the future heretic, who denied the divinity of Christ. Upon his return to Alexandria, Peter anathematized and excommunicated Arius after he refused to correct his position and submit to the truth.

In 311, Peter returned to Alexandria during a pause in the persecutions, but was soon arrested and sentenced to death. Upon hearing of his sentence, a large number of people, expressing their outrage, assembled at the gate of the prison where he was held. To avoid a riot, with its resulting bloodshed, Peter suggested to the Roman authorities that they secrete him through the back of the prison so he might be taken away secretly to execution. His executioners took Peter from the prison in the dark of night to the place where St. Mark had been martyred and, there, Peter was beheaded. Tradition notes that on that night a pious virgin heard a voice from the heaven declaring, “Peter was the first among the Apostles; Peter is the last of the Alexandrian martyrs.”

During the time of Peter’s life as archbishop he nurtured the Church of Alexandria, seeing it strengthened and grow in spite of the persecutions. After his execution, his people gathered at the place of his death where they collected his body and head and proceeded to the cathedral. At the cathedral they dressed him in his bishop’s vestments and sat him on his throne at the high place in the altar. During his life St. Peter always sat on a footstool next the the throne as he would never sit on it. He once explained he did not dare sit on the throne because whenever he approached his throne he saw a heavenly light shining on it and sensed the presence of a divine power.

St. Peter is known as a great theologian and champion of Orthodoxy. The Councils of Ephesus and Chalcedon consulted passages in his book, On the Divinity (of Jesus Christ). The most widely known and esteemed of his works by the Church are his Penitential Canons.

Saint Sylvester, the holy Abbot of Monte Fano near Fabriano. In the Thirteenth Century, when many Benedictine monasteries in Italy had lost much of their former holiness and learning, St. Sylvester succeeded in infusing new vitality into the ancient Order, by founding a monastic family which by the blessing of God transformed several Religious houses, and was distinguished by the sanctity of its members. His Order is called the Silvestrines; it numbered twenty-five houses in Italy when its founder died in 1267 at the age of ninety.

Look upon our infirmity, O almighty God, and, because the weight of our own evil deeds beareth us down, may the glorious intercession of blessed Peter, Thy martyr and bishop, protect us. Through our Lord Jesus Christ, Thy Son, Who liveth and reigneth with Thee in the unity of the Holy Ghost, one God Forever and ever. R.Amen.

Commemoration of St Sylvester, Abbot
O most merciful God, Who, when the holy abbot Sylvester was piously pondering over the vanity of earthly things whilst he stood by an open grave, didst vouchsafe to call him to the desert, we supplicate Thee that, despising earthly things, after his example, we may forever enjoy Thy presence. Through the same Lord Jesus Christ, Thy Son, Who liveth and reigneth with Thee in the unity of the Holy Ghost, God, Forever and ever. R.Amen.

Lesson from the Book of Wisdom. She conducted the just, when he fled from his brother’s wrath, through the right ways, and shewed him the kingdom of God, and gave him the knowledge of the holy things, made him honourable in his labours, and accomplished his labours. In the deceit of them that overreached him, she stood by him, and made him honourable. She kept him safe from his enemies, and she defended him from seducers, and gave him a strong conflict, that he might overcome, and know that wisdom is mightier than all. She forsook not the just when he was sold, but delivered him from sinners: she went down with him into the pit. And in bands she left him not, till she brought him the sceptre of the kingdom, and power against those that oppressed him: and shewed them to be liars that had accused him, and gave him everlasting glory.

Blessed is the man that feareth the Lord: he shall delight exceedingly in his commandments. His seed shall be mighty upon earth: the generation of the righteous shall be blessed. Allelúja, allelúja. Ps 20:4 For thou hast prevented him with blessings of sweetness: thou hast set on his head a crown of precious stones. Allelúja.

Thou hast made him a little less than the angels, thou hast crowned him with glory and honour: and hast set him over the works of thy hands.

O Lord, graciously accept, through the merits of Your blessed Martyr and Bishop, Peter, the sacrificial gifts dedicated to You, and grant that they may prove to be for us a lasting help. Through Jesus Christ, thy Son our Lord, Who liveth and reigneth with thee, in the unity of the Holy Ghost, ever one God, world without end. R. Amen.

For St. Sylvester, Abbot
We beseech Thee, O Lord, that, while we reverently offer these gifts to Thy divine majesty we may by pious preparation of soul and purity of heart, following the example of blessed abbot Sylvester, become worthy to partake holily of the body and blood of Thy Son, Who with Thee livest and reignest, in the unity of the Holy Ghost, God. Forever and ever. R.Amen.

He who wishes to come after Me, let him deny himself, and take up his cross, and follow Me.

Refreshed by partaking of the sacred gift, we beseech You, O Lord our God, that we may enjoy the benefits of the rite we perform through the intercession of blessed Peter, Your Martyr and Bishop. Through Jesus Christ, thy Son our Lord, Who liveth and reigneth with thee, in the unity of the Holy Ghost, ever one God, world without end. R. Amen.

For St. Sylvester, Abbot
We pray Thee, O Lord, that Thou grant unto us, refreshed with the divine banquet, to follow closely the footsteps of the holy abbot Sylvester, that we may have an abundant reward with the saints in the kingdom of Thy glory. Through our Lord Jesus Christ, Thy Son, Who liveth and reigneth with Thee in the unity of the Holy Ghost, God, For ever and ever. R. Amen.