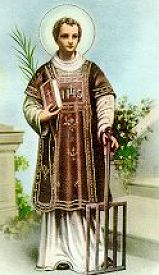 After the feast of Sts. Peter and Paul this is the greatest festival in the ancient Roman Liturgy. The terrible martyrdom endured by the famous archdeacon deeply impressed the generations that came immediately after him, for whom Saint Lawrence became at Rome that which Saint Stephen had been at Jerusalem. During the persecutions under Valerian in 258, numerous priests and bishops were put to death, while Christians belonging to the nobility or the Roman Senate were deprived of their goods and exiled. Pope St Sixtus II was one of the first victims of this persecution, being beheaded on August 6. A legend cited by the holy Doctor of the Church and Bishop St Ambrose of Milan says that Lawrence met the His Holiness Sixtus II on his way to his execution. There Ambrose reports that Lawrence asked the Pope, “Where are you going, my dear father, without your son? Where are you hurrying off to, holy priest, without your deacon? Before you never mounted the altar of sacrifice without your servant, and now you wish to do it without me?” Pope St. Sixtus was moved and was given the gift of prophesy from the Holy Ghost regarding St. Lawrence, saying that “after three days you will follow me”.

It was during those three days that St. Lawrence, in order to save from confiscation some property of the Church that had been entrusted to him, sold it and gave the proceeds to the poor. As the enemies of the Church believed he had concealed the treasures and hoped to make him reveal their hiding-place, he was roasted alive on a gridiron. After an agony of hours he expired with a prayer on his lips for the conversion of the heathens, but not before puzzling his persecutors by saying “Turn me over, I’m done on this side.” His ashes were placed in peace by the priest Justin in the cemetery of Cyriacus. Constantine erected a basilica on the spot, which has since been rebuilt several times. The gridiron is still preserved in the old Church of San Lorenzo in Lucina, which Pope Damasus I. It is known to this day as San Lorenzo fuori le Mura, while the minor basilica of San Lorenzo in Panisperna was built over the place of his martyrdom. The gridiron of the martyrdom was placed by Pope Paschal II in the church of San Lorenzo in Lucina.

APPRECIATION If you appreciate these daily posts and the broadcasting of Mass, please consider expressing your appreciation via a donation to our ministry with the homeless… To donate safely and securely, just press the button!

Praise and beauty are before Him: holiness and majesty in His sanctuary. (Ps. 95: 1) Sing ye to the Lord a new canticle; sing to the Lord all the earth. v. Glory be…etc

Grant us, we beseech Thee O almighty God, to extinguish the flames of our evil dispositions, as Thou didst grant blessed Lawrence to overcome the fires of his torments. Through our Lord Jesus Christ, Thy Son, Who liveth and reigneth with Thee in the unity of the Holy Ghost, God, Forever and ever.

Lesson from the Epistle of blessed Paul the Apostle to the Corinthians. Brethren, He who soweth sparingly, shall also reap sparingly: and he who soweth in blessings, shall also reap of blessings. Everyone as he hath determined in his heart; not with sadness, or of necessity; for God loveth a cheerful giver. And God is able to make all grace abound in you; that ye, always having all sufficiency in all things, may abound to every good work; as it is written, He hath dispersed abroad, He hath given to the poor: His justice remaineth forever. And He that ministereth seed to the sower, will both give you bread to eat, and will multiply your seed, and increase the growth of the fruits of your justice.

Thou hast proved my heart, O Lord, and visited it by night. V. Thou hast tried me by fire, and iniquity hath not been found in me. Alleluia, alleluia. V. The levite Lawrence wrought a good work, who by the sign of the cross gave sight to the blind. Alleluia.

At that time, Jesus said to His disciples: “Amen. amen, I say to you, unless the grain of wheat falling into the ground, die, itself remaineth alone: but if it die, it bringeth forth much fruit. He that loveth his life, shall lose it; and he that hateth his life in this world, keepeth it unto life eternal. If any man minister to Me, let him follow Me; and where I am, there also shall My minister be. If any man minister to Me, him will My Father.”

Praise and beauty are before Him: holiness and majesty are in His sanctuary.

Accept, we beseech Thee, O Lord, the gifts offered Thee, and, by the interceding merits of blessed Lawrence, grant that they may be to as a help unto our salvation. Through our Lord Jesus Christ Thy Son our Lord, Who liveth and reigneth with Thee in the unity of the Holy Ghost, one God Forever and ever.

If any man minister to me, let him follow Me: and where I am, there also shall My minister be.

Filled with Thy sacred gift, we humbly beseech Thee, O Lord, that what we celebrate with our homage duly given by the intercession of Thy blessed martyr Lawrence, we may also know as an increase of Thy saving grace within us. Through the Lord Jesus Christ, Thy Son, Who liveth and reigneth with Thee in the unity of the Holy Ghost, one God For ever and ever.