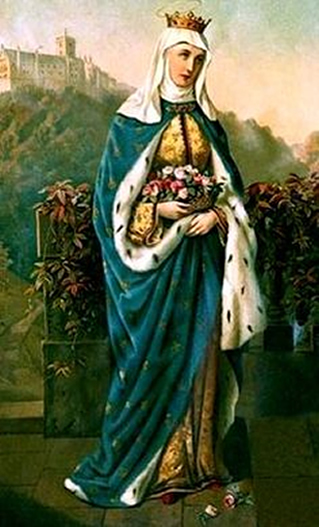 Elizabeth is usually depicted in royal garb with a dove or an olive branch. At her birth in 1271, her father Pedro III, future king of Aragon, was reconciled with his father James, the reigning monarch. This proved to be a portent of things to come. Under the healthful influences surrounding her early years, she quickly learned self-discipline and acquired a taste for spirituality.

Thus fortunately prepared, Elizabeth was able to meet the challenge when at the age of 12, she was given in marriage to Denis, king of Portugal. She was able to establish for herself a pattern of life conducive to growth in God’s love, not merely through her exercises of piety, including daily Mass, but also through her exercise of charity, by which she was able to befriend and help pilgrims, strangers, the sick, the poor—in a word, all those whose need came to her notice. At the same time she remained devoted to her husband, whose infidelity to her was a scandal to the kingdom.

Denis, too, was the object of many of her peace endeavors. Elizabeth long sought peace for him with God, and was finally rewarded when he gave up his life of sin. She repeatedly sought and effected peace between the king and their rebellious son Alfonso, who thought that he was passed over to favor the king’s illegitimate children. She acted as peacemaker in the struggle between Ferdinand, king of Aragon, and his cousin James, who claimed the crown. And finally from Coimbra, where she had retired as a Franciscan tertiary to the monastery of the Poor Clares after the death of her husband, Elizabeth set out and was able to bring about a lasting peace between her son Alfonso, now king of Portugal, and his son-in-law, the king of Castile.

I know, O Lord, that Thy judgments are equity, and in Thy truth Thou hast humbled me : pierce Thou my flesh with Thy fear, I am afraid of Thy judgments. (Psalm 118) Blessed are the undefiled in the way : who walk in the law of the Lord. v. Glory be to the Father and to the Son and to the Holy Ghost, as it was in the beginning, is now and ever shall be, world without end. Amen. Repeat I know, O Lord…

Most merciful God, Who among other admirable gifts, endowed blessed Queen Elizabeth with the special grace of calming the tumult of war; grant by her intercession that, after the peace for which we humbly pray, we may attain everlasting happiness. Through our Lord Jesus Christ, Thy Son, Who liveth and reigneth with Thee in the unity of the Holy Ghost, one God Forever and ever. R.Amen.

Lesson from the book of Proverbs. When one finds a worthy wife, her value is far beyond pearls. Her husband, entrusting his heart to her, has an unfailing prize. She brings him good, and not evil, all the days of her life. She obtains wool and flax and makes cloth with skillful hands. Like merchant ships, she secures her provisions from afar. She rises while it is still night, and distributes food to her household. She picks out a field to purchase; out of her earnings she plants a vineyard. she is girt about with strength, and sturdy are her arms. She enjoys the success of her dealings; at night her lamp is undimmed. She puts her hands to the distaff, and her fingers ply the spindle. She reaches out her hands to the poor, and extends her arms to the needy. She fears not the snow for her household; all her charges are doubly clothed. She makes her own coverlets; fine linen and purple are her clothing. Her husband is prominent at the city gates as he sits with the elders of the land. She makes garments and sells them, and stocks the merchants with belts. She is clothed with strength and dignity, and she laughs at the days to come. She opens her mouth in wisdom, and on her tongue is kindly counsel. She watches the conduct of her household, and eats not her food in idleness. Her children rise up and praise her; her husband, too, extols her: Many are the women of proven worth, but you have excelled them all. Charm is deceptive and beauty fleeting; the woman who fears the Lord is to be praised. Give her a reward of her labors, and let her works praise her at the city gates.

Ps 44:3; 44:5 Grace is poured out upon your lips; thus God has blessed you forever. V. In the cause of truth and mercy and for the sake of justice: may your right hand show you wondrous deeds. Alleluia, alleluia. Ps 44.5 V. In your splendor and your beauty ride on triumphant, and reign. Alleluia.

At that time, Jesus spoke this parable to His disciples: “The kingdom of heaven is like unto a treasure hidden in a field; which a man having found, hid it, and for joy thereof goeth, and selleth all that he hath, and buyeth that field. Again, the kingdom of Heaven is like to a merchant seeking good pearls. Who, when he had found one pearl of great price, went his way and sold all that he had, and bought it. Again, the kingdom of Heaven is like to a net cast into the sea, and gathering together of all kinds of fishes; which, when it was filled, they drew out, and sitting by the shore, they chose out the good into vessels, but the bad they cast forth. So shall it be at the end of the world. The angels shall go out, and shall separate the wicked from among the just, and shall cast them into the furnace of fire; there shall be weeping and gnashing of teeth. Have ye understood all these things?” They say to Him, ‘Yes.’ He said unto them,”Therefore every scribe instructed in the kingdom of Heaven, is like to a man who is a householder, who bringeth forth out of his treasure new things and old.”

Grace is poured abroad in thy lips : therefore God hath blessed thee for ever and for ages of ages. Alleluia, alleluia.

O Lord, may the offerings of Your devoted people be pleasing to You in honor of Your saints, through whose merits they know they have received help in time of trial. Through our Lord Jesus Christ Thy Son our Lord, Who liveth and reigneth with Thee in the unity of the Holy Ghost, one God Forever and ever. R.Amen.

Thou hast loved injustice and hated iniquity : therefore God thy God, hath anointed thee with the oil of gladness above thy fellows. Alleluia.

You have filled Your people, O Lord, with sacred gifts; ever comfort us, we beseech You, by the intercession of her whose festival we are celebrating. Through our Lord Jesus Christ, Thy Son, Who liveth and reigneth with Thee in the unity of the Holy Ghost, one God For ever and ever. R. Amen.