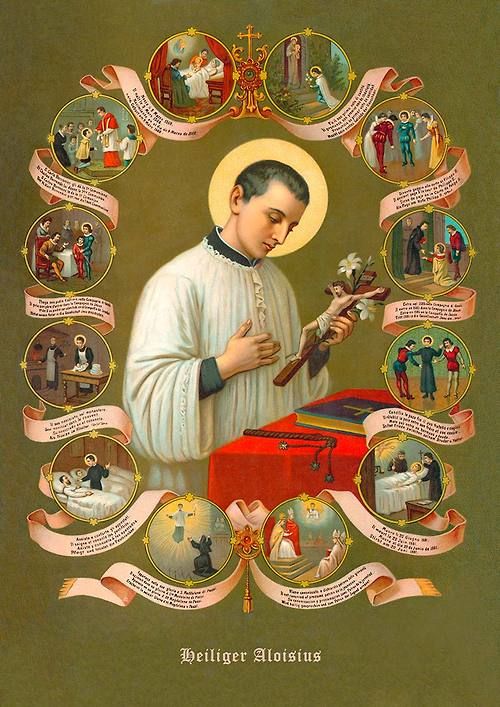 The Octave of Corpus Christi being privileged, Feasts are either commemorated only (in which case the appropriate Collect is said after that of the Office) or transferred to after the Octave.

The Feast of Corpus Christi (Latin for Body of Christ), also known as Corpus Domini, is a Latin Rite liturgical solemnity celebrating the tradition and belief in the body and blood of Jesus Christ and his Real Presence in the Eucharist. It emphasizes the joy of the institution of the Eucharist, which was observed on Holy Thursday in the sombre atmosphere of the nearness of Good Friday.

The Lord can make saints anywhere, even amid the brutality and license of Renaissance life. Florence was the “mother of piety” for Aloysius Gonzaga despite his exposure to a “society of fraud, dagger, poison, and lust.” As a son of a princely family, he grew up in royal courts and army camps. His father wanted Aloysius to be a military hero.

At age 7 Aloysius experienced a profound spiritual quickening. His prayers included the Office of Mary, the psalms, and other devotions. At age 9 he came from his hometown of Castiglione to Florence to be educated; by age 11 he was teaching catechism to poor children, fasting three days a week, and practicing great austerities. When he was 13 years old, he traveled with his parents and the Empress of Austria to Spain, and acted as a page in the court of Philip II. The more Aloysius saw of court life, the more disillusioned he became, seeking relief in learning about the lives of saints.

A book about the experience of Jesuit missionaries in India suggested to him the idea of entering the Society of Jesus, and in Spain his decision became final. Now began a four-year contest with his father. Eminent churchmen and laypeople were pressed into service to persuade Aloysius to remain in his “normal” vocation. Finally he prevailed, was allowed to renounce his right to succession, and was received into the Jesuit novitiate.

Like other seminarians, Aloysius was faced with a new kind of penance—that of accepting different ideas about the exact nature of penance. He was obliged to eat more, and to take recreation with the other students. He was forbidden to pray except at stated times. He spent four years in the study of philosophy and had Saint Robert Bellarmine as his spiritual adviser.

In 1591, a plague struck Rome. The Jesuits opened a hospital of their own. The superior general himself and many other Jesuits rendered personal service. Because he nursed patients, washing them and making their beds, Aloysius caught the disease. A fever persisted after his recovery and he was so weak he could scarcely rise from bed. Yet, he maintained his great discipline of prayer, knowing that he would die within the octave of Corpus Christi, three months later, at the age of 23.

O God, Who in a wonderful Sacrament hast left unto us the memorial of Thy Passion; grant, we beseech Thee, that we may so venerate the sacred mysteries of Thy Body and Blood as to experience continually within ourselves the fruit of Thy Redemption. Who livest and reignest, with God the Father, in the unity of the Holy Ghost, God, Forever and ever. R. Amen.

Commemoration of St Aloysius Gonzaga
O God, bestower of heavenly gifts, Who in the angelic youth Aloysius joined wondrous innocence of life to an equally wondrous love of penance; grant, by his merits and prayers, that we who have not followed him in his innocence may imitate him in his penance. Through Jesus Christ, thy Son our Lord, Who liveth and reigneth with thee, in the unity of the Holy Ghost, ever one God, world without end. R. Amen.

Lesson from the First Epistle of Blessed Paul the Apostle to the Corinthians. Brethren, I have received of the Lord, that which also I delivered to you that the Lord Jesus, the same night in which He was betrayed, took bread, and giving thanks, broke, and said: Take ye and eat, this is My Body which shall be delivered for you; this do for the commemoration of Me. In like manner also the chalice, after He had supped, saying: This chalice is the new testament in My Blood; this do ye, as often as you shall drink, for the commemoration of Me. For as often as you shall eat this bread and drink this chalice, you shall show the death of the Lord until He come. Therefore whosoever shall eat this bread, or drink of the chalice of the Lord unworthily, shall be guilty of the Body and the Blood of the Lord. But let a man prove himself; and so let him eat of that bread, and drink of the chalice. For he that eateth and drinketh unworthily, eateth and drinketh judgment to himself, not discerning the Body of the Lord.

The eyes of all hope in Thee, O Lord, and Thou givest them meat in due season. V. Thou openest Thy hand, and fillest living every creature with Thy blessing. Alleluia, alleluia. V. (John 6: 56) My Flesh is meat indeed and My Blood is drink indeed: he that eateth My Flesh and drinketh My Blood, abideth in Me, and I in him. Alleluia.

Sion, lift up thy voice and sing:
Praise thy Savior and thy King,
Praise with hymns thy shepherd true.

All thou canst, do thou endeavor,
Yet thy praise can equal never
Such as merits thy great King.

See today before us laid
The living and life-giving Bread!
Theme for praise and joy profound!

The same which at the sacred board
Was, by our incarnate Lord,
Giv’n to His Apostles round.

Let the praise be loud and high:
Sweet and tranquil be the joy
Felt today in every breast.

On this festival divine
Which records the origin
Of the glorious Eucharist.

On this table of the King,
Our new Paschal offering
Brings to end the olden rite.

Here, for empty shadows fled,
Is reality instead;
Here, instead of darkness, light.

His own act, at supper seated,
Christ ordain’d to be repeated,
In His memory divine;

Wherefore now, with adoration,
We, the Host of our salvation,
Consecrate from bread and wine.

Hear, what holy Church maintaineth,
That the bread its substance changeth
Into Flesh, the wine to Blood.

Doth it pass thy comprehending?
Faith, the law of sight transcending
Leaps to things not understood,

Here beneath these signs are hidden
Priceless things, to sense forbidden
Signs, not things, are all we see.

Flesh, from bread, and Blood from wine,
Yet is Christ in either sign,
All entire, confessed to be.

They, who of Him here partake,
Sever not, nor rend, nor break:
But, entire, their Lord receive

Whether one or thousands eat,
All receive the self-same meat,
Nor the less for others leave,

Both the wicked and the good
eat of this celestial Food;
But with ends how opposite!

Here ‘t is life:
and there ‘t is death:
The same, yet issuing to each

In a difference infinite.
Nor a single doubt retain,
When they break the Host in twain,

But that in each part remains
What was in the whole before;
Since the simple sign alone

Suffers change in state or form
The signified remaining one
And the same for evermore.

Lo! upon the altar lies,
Hidden deep from human eyes,
Bread of Angels from the skies,

Made the food of mortal man;
Children’s meat to dogs denied,
In old types presignified:

In the manna Heaven-supplied
In Isaac, and the Paschal lamb.
Jesu! Shepherd of the sheep!

Thou Thy flock in safety keep,
Living Bread! Thy life supply:
Strengthen us, or else we die:

Fill us with celestial grace!
Thou, who feedest us below!
Source of all we have or know!

Grant that with Thy Saints above,
Sitting at the feast of love,
We may see Thee face to face.
Amen. Alleluia.

At that time, Jesus said to the multitude of the Jews: “My Flesh is meat indeed, and My Blood is drink indeed. He that eateth My Flesh, and drinketh My Blood, abideth in Me, and I in him. As the living Father hath sent Me, and I live by the Father, so he that eateth Me, the same shall also live by Me. This is the Bread that came down from Heaven. Not as your fathers did eat manna and are dead. He that eateth this bread shall live forever.”

The priests of the Lord offer incense and loaves to God, and therefore they shall be holy to their God, and shall not defile His Name. Alleluia.

Graciously bestow on Thy Church, we beseech Thee, O Lord, the gifts of unity and peace, which are mystically shown forth in the gifts now offered. Through our Lord Jesus Christ, Thy Son, Who liveth and reigneth with Thee in the unity of the Holy Ghost, God, Forever and ever. R. Amen.

Commemoration of St Aloysius Gonzaga
Make us take our place, O Lord, at Your heavenly banquet clothed in the wedding-garment which the loving preparation and constant tears of blessed Aloysius adorned with precious pearls. Through Jesus Christ, thy Son our Lord, Who liveth and reigneth with thee, in the unity of the Holy Ghost, ever one God, world without end. R. Amen.

PREFACE of the Incarnation

It is truly meet and just, right and for our salvation, that we should at all times and in all places, give thanks unto Thee, O holy Lord, Father almighty, everlasting God, for through the Mystery of the Word made flesh, the new light of Thy glory hath shone upon the eyes of our mind, so that while we acknowledge God in visible form, we may through Him be drawn to the love things invisible. And therefore with Angels and Archangesl, with Thrones and Dominations, and with all the hosts of the heavenly army, we sing the hymn of The glory, evermore saying:

Make us, we beseech Thee, O Lord, to be filled with the eternal enjoyment of Thy Divinity, which is prefigured by the reception in this life of Thy precious Body and Blood. Who livest and reignest with God the Father in the unity of the Holy Ghost, God, Forever and ever. R. Amen.

Commemoration of St Aloysius Gonzaga
Grant, O Lord, that we who have been fed with the food of angels may angelic lives, and, following the example of him whom we honor today, may we spend our days in unceasing thanksgiving. Through Jesus Christ, thy Son our Lord, Who liveth and reigneth with thee, in the unity of the Holy Ghost, ever one God, world without end. R. Amen.