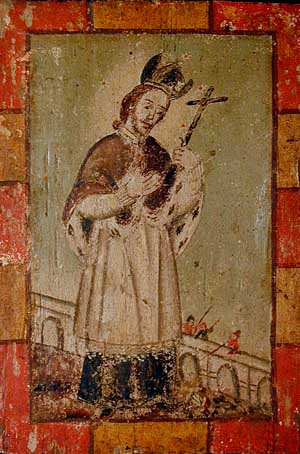 In his early childhood, John Nepomucene was cured of a disease through the prayers of his good parents. In thanksgiving, they consecrated him to the service of God. After he was ordained, he was sent to a parish in the city of Prague. He became a great preacher, and thousands of those who listened to him changed their way of life. Father John was invited to the court of Wenceslaus IV. He settled arguments and did many kind deeds for the needy people of the city. He also became the queen’s confessor. When the king was cruel to the queen, Father John taught her to bear her cross patiently. One day, about 1393, the king asked him to tell what the queen had said in confession. When Father John refused, he was thrown into prison. A second time, he was asked to reveal the queen’s confession. “If you do not tell me,” said the king, “you shall die. But if you obey my commands, riches and honor will be yours.” Again Father John refused. He was tortured. The king ordered to be thrown into the river. Where he drowned, a strange brightness appeared upon the water. He is known as the “martyr of the confessional.” He is patron of Czechoslovakia, where he is invoked against floods and against slander.

Thou last protected me, O God, from the assembly of the malignant, alleluia: from the multitude of the workers of iniquity, alleluia. alleluia. (Ps. 63: 2) Hear, O God, my prayers, when I make supplication to Thee: deliver my soul from the fear of the enemy v. Glory be to the Father and to the Son and to the Holy Ghost, as it was in the beginning, is now and ever shall be, world without end. Amen…

Grant, we beseech Thee, O almighty God, that we, who venerate the birthday of blessed John, Thy martyr, may, through his intercession, be strengthened in the love of Thy name. Through Our Lord…

Dearly beloved, be mindful that the Lord Jesus Christ is risen again from the dead, of the seed of David, according to my gospel. Wherein I labor even unto bands, as an evil-doer: but the word of God is not bound. Therefore I endure all things for the sake of the elect, that they may also obtain the salvation, which is in Christ Jesus, with heavenly glory. But thou hast fully known my doctrine, manner of life, purpose, faith, long-suffering, love, patience, persecutions, afflictions, such as came upon me at Antioch, at Iconium, and at Lystra; what persecutions I endured and out of them all the Lord delivered me. And all that will live godly in Jesus Christ shall suffer persecution.

At that time, The Lord appointed also other seventy-two; and He sent them two and two before His face into every city and place whither He Himself was to come. And He said to them, “The harvest indeed is great, but the laborers are few: pray ye therefore the Lord of the harvest, that He send laborers into His harvest. Go, behold I send you as lambs among wolves. Carry neither purse, nor scrip, nor shoes; and salute no man by the way. Into whatsoever house you enter, first say, Peace be to this house: and if the son of peace be there, your peace shall rest upon him: but if not, it shall return to you. And in the same house remain, eating and drinking such things as they have: for the laborer is worthy of his hire. Remove not from house to house. And into what city soever you enter, and they receive you, eat such things as are set before you; and heal the sick that are therein; and say to them, The kingdom of God is come nigh unto you.”

The Heavens shall confess Thy wonders, O Lord, and Thy truth in the church of the saints, alleluia, alleluia.

The just shall rejoice in the Lord, and shall hope in Him: and all the upright in heart shall be praised, alleluia, alleluia.