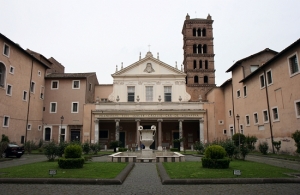 Look upon Thy people with favor,
we beseech Thee, O Lord,
and grant that they whom Thou dost command
to abstain from food may also cease from baneful vices.
Through Jesus Christ our Lord…

The Station is at the church of St. Cecelia where the Saint lived and was martyred and where her body now rests. The first church on the site was built in the 3rd or 5th century, and the baptistery from this church was found during excavations, situated underneath the present Chapel of Relics. A house from the Imperial era was also found, and tradition claims that the church was built over the house in which St Cecilia lived. This house was one of the tituli, the first parish churches of Rome, known as the titulus Ceciliae.
Collecta at St. George. Station at St. Cecilia The Basilica of St. George still stands on the further side of the pons Senatorum, in the region of the Velabrum.
The titulus Cecilice is in Trastevere, in the actual house of the martyr. In 1595, the sarcophagus under the altar containing her relics was opened, and the body of the holy virgin was found in the same position as it had assumed after the fatal blow of the executioner, lying on one side, with the knees slightly bent and her arms stretched along the side.
The privelege which Jesus concedes to His chosen friends is that of drinking His chalice. The draught is bitter, but it gives strength to the soul. Love is nourished on sacrifice and pain. The more we love Jesus, the more we shall suffer for Him.
Cecilia is one of the most popular of Roman saints. She lived in the 3rd century and the first legend of her life was written in the 6th century. A noblewoman from a senatorial family, Cecilia took a personal vow of virginity and pledged her life to God. Unfortunately for her, Cecilia’s parents still married her off.
On her wedding night, Cecilia told her new husband (Valerian of Trastevere) about her pledge of virginity and persuaded him to be baptized. Valerian’s brother Tibertius and another man named Maximus were converted and baptized as well, and the three men began a Christian ministry of giving alms to the poor and arranging for proper burial of martyrs. Eventually they also became martyrs for refusing to worship the Roman gods.
After burying her husband and his brother, Cecilia was persecuted as well. According to her legend, she was first locked in the caldarium of her own bathhouse for several days. This failed to suffocate her as planned; in fact, she sang throughout the ordeal (Cecilia is the patron saint of music). Next a soldier was sent to behead her, but after three hacks with an axe she was still alive. However, she died of her wounds three days later.
It has been difficult to determine the dates of Cecilia’s life and death, but a few historical details given in early accounts provide a general range of 175 to 250 AD. The first account of Cecilia’s martyrdom (from which the story above derives) was written in the middle of the 5th century; like most narratives of this period it is very much embellished. The Catholic Encyclopedia calls it a “pious romance.”
Legend aside, Cecilia certainly seems to be a historical figure. She was a patrician woman who owned a house (domus) in Trastevere, in which she founded a church (titulus). Archaeological evidence shows there was a 2nd-century house on the site and that it was used for Christian worship by the 5th century. An early 5th-century document mentions a titulus of “Romae Transtibere, Caecili.” Cecilia was buried in the Catacomb of San Callisto near the Crypt of the Popes, while Valerian and Tibertius were buried in the Catacomb of Pretestato.
The present church was built over the ruins of Cecilia’s house by Pope Paschal I (817-24). The body of Cecilia (said to be found incorrupt) and those of Valerian, Tibertius and Maximus were exhumed from their original burial places and enshrined in the new church.
During a restoration of the church in 1599, Cecilia was exhumed again, and again she was found incorrupt, with three cuts in her neck. The exhumation was carried out in front of several witnesses, include a sculptor who made a statue of her body as he saw it (more on this below).
The church’s facade was added by Ferdinando Fuga in 1725 and more renovations were done in 1823, including enclosing the nave columns inside piers. The ancient Roman buildings beneath the church were excavated and too-creatively restored in 1897. The church was restored again in 1990.

O God, the restorer and lover of innocence,
draw the hearts of Thy servants towards Thyself
and kindle the fire of Thy Spirit in them,
so that they may be found firm in faith
and fruitful in deed:
through Our Lord…