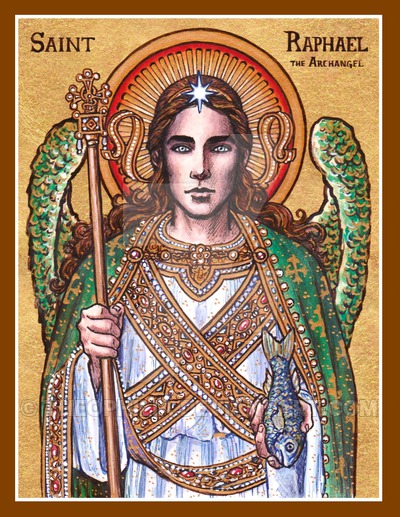 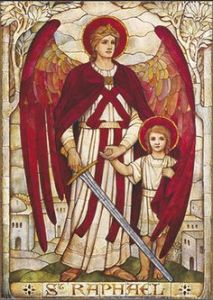 “It is God who heals”, “God Heals”, “God, Please Heal,” performs all manners of healing.

The name of the angel Raphael appears only in the Biblical Book of Tobit. Raphael first appears disguised in human form as the travelling companion of Tobit’s son, Tobiah calling himself “Azarias the son of the great Ananias”. During the course of the journey the archangel’s protective influence is shown in many ways including the binding of a demon in the desert of upper Egypt. After returning and healing the blind Tobit, Azarias makes himself known as “the angel Raphael, one of the seven, who stand before the Lord” Tobit 12:15. He is venerated as Saint Raphael the Archangel.

Regarding the healing powers attributed to Raphael, we have his declaration to Tobit (Tobit, 12) that he was sent by the Lord to heal him of his blindness and to deliver Sarah, his future daughter-in-law, from the demon Asmodeus, who kills every man she marries on their wedding night before the marriage can be consummated.

Due to his actions in the Book of Tobit and the Gospel of John, St. Raphael is accounted patron of travelers, the blind, happy meetings, nurses, physicians, medical workers, matchmakers, Christian marriage, and Catholic studies. As a particular enemy of the devil, he was revered in Catholic Europe as a special protector of Catholic sailors: on a corner of Venice’s famous Doge’s Palace, there is a relief depicting Raphael holding a scroll on which is written: Efficia fretum quietum (“Keep the Gulf quiet”). On July 8, 1497, when Vasco Da Gama set forth from Lisbon with his four ship fleet to sail to India, the flagship was named—at the King of Portugal’s insistence—the St. Raphael. When the flotilla reached the Cape of Good Hope on October 22, the sailors disembarked and erected a column in the archangel’s honor. The little statue of St. Raphael that accompanied Da Gama on the voyage is now in the Naval Museum in Lisbon.

The Archangel Raphael is said to have appeared in Cordova, Spain, during the 16th century; in response to the city’s appeal, Pope Innocent X allowed the local celebration of a feast in the Archangel’s honor on May 7, the date of the principal apparition. St. John of God, founder of the Hospital order that bears his name, is also said to have received visitations from St. Raphael, who encouraged and instructed him. In tribute to this, many of the Brothers Hospitallers of St. John of God’s facilities are called “Raphael Centers” to this day. The 18th century Neapolitan nun, St. Maria Francesca of the Five Wounds is also said to have seen apparitions of Raphael.

O God, Who didst give blessed Raphael, the Archangel, as a companion, to thy servant Tobias when on his journey: grant us, Thy servants, that we may ever be protected by his guardianship and strengthened by his assistance. Through Jesus Christ, thy Son our Lord, Who liveth and reigneth with thee, in the unity of the Holy Ghost, ever one God, world without end. R. Amen.

In those days, the Angel Raphael said to Tobias: It is good to hide the secret of a king: but honorable to reveal and confess the works of God. Prayer is good with fasting and alms, more than to lay up treasures of gold: for alms delivereth from death, and the same is that which purgeth away sins, and maketh to find mercy and life everlasting. But they that commit sin and iniquity are enemies to their own soul. I discover then the truth unto you, and I will not hide the secret from you. When thou didst pray with tears, and didst bury the dead, and didst leave thy dinner, and hide the dead by day in thy house, and bury them by night, I offered thy prayer to the Lord. And because thou wert acceptable to God, it was necessary that temptation should prove thee. And now the Lord hath sent me to heal thee, and to deliver Sara thy son’s wife from the devil. For I am the angel Raphael, one of the seven who stand before the Lord.

Raphael, the angel of the Lord, took, and bound the devil. Great is Our Lord, and great is His power. Alleluia, alleluia. I will sing praise to Thee in the sight of the Angels, I will worship towards Thy holy temple, and I will give glory to Thy name, O Lord. Alleluia.

At that time, there was a festival day of the Jews, and Jesus went up to Jerusalem. Now there is at Jerusalem a pond, called Probatica, which in Hebrew is named Bethsaida, having five porches. In these lay a great multitude of sick, of blind, of lame, of withered, waiting for the moving of the water. And an Angel of the Lord descended at certain times into the pond: and the water was moved. And he that went down first into the pond after the motion of the water, was made whole of whatsoever infirmity he lay under.

An Angel stood near the altar of the temple, having a golden censer in his hand: and there was given to him much incense: and the smoke of the perfumes ascended before God, alleluia.

Vouchsafe, O Lord, to make the holy Archangel Raphael our helper, and let him whom we believe to be continually standing before Thy majesty, present our poor prayers to be blessed by Thee. Through Jesus Christ, thy Son our Lord, Who liveth and reigneth with thee, in the unity of the Holy Ghost, ever one God, world without end. R. Amen.