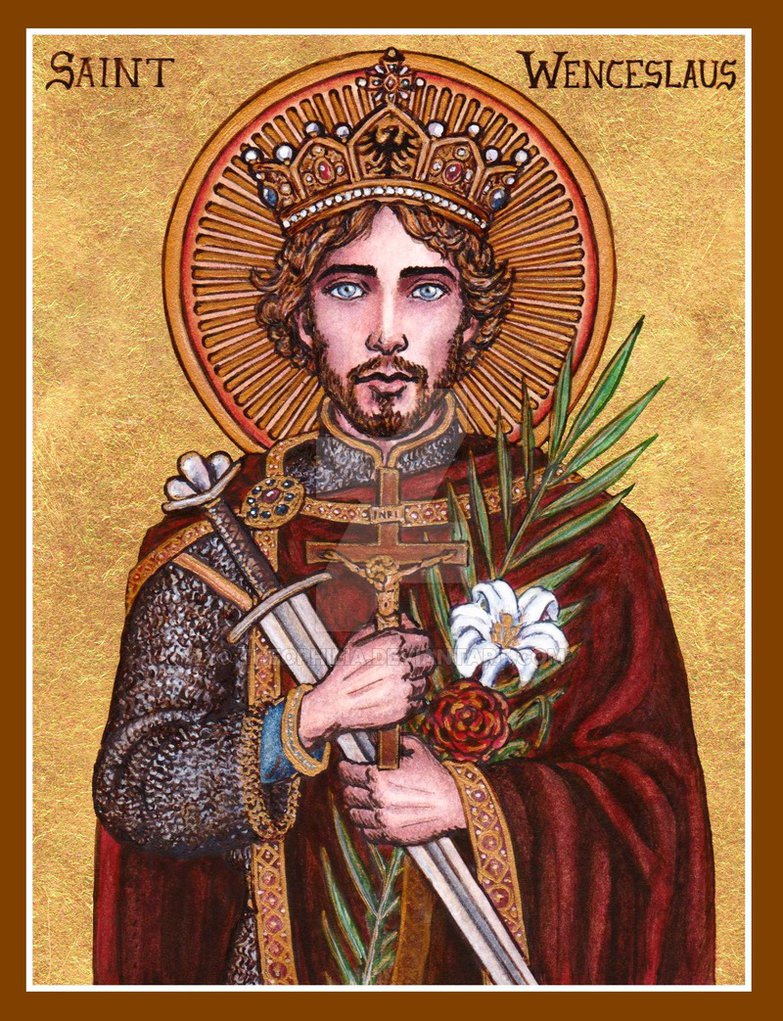 If saints have been falsely characterized as “other worldly,” the life of Wenceslaus stands as an example to the contrary: He stood for Christian values in the midst of the political intrigues which characterized 10th-century Bohemia.

Wenceslaus was born in 907 near Prague, son of the Duke of Bohemia. His saintly grandmother, Ludmilla, raised him and sought to promote him as ruler of Bohemia in place of his mother, who favored the anti-Christian factions. Ludmilla was eventually murdered, but rival Christian forces enabled Wenceslaus to assume leadership of the government.

His rule was marked by efforts toward unification within Bohemia, support of the Church, and peace-making negotiations with Germany, a policy which caused him trouble with the anti-Christian opposition. His brother Boleslav joined in the plotting, and in September of 929 invited Wenceslaus to Alt Bunglou for the celebration of the feast of Saints Cosmas and Damian. On the way to Mass, Boleslav attacked his brother, and in the struggle, Wenceslaus was killed by supporters of Boleslav.

Although his death resulted primarily from political upheaval, Wenceslaus was hailed as a martyr for the faith, and his tomb became a pilgrimage shrine. He is hailed as the patron of the Bohemian people and of the former Czechoslovakia.

“Good King Wenceslaus” was able to incarnate his Christianity in a world filled with political unrest. While we are often victims of violence of a different sort, we can easily identify with his struggle to bring harmony to society. The call to become involved in social change and in political activity is addressed to Christians; the values of the gospel are sorely needed today.

O God, Who, through the palm of martyrdom, did not transfer blessed Wenceslaus from an earthly principality to Heavenly glory, keep us, by his prayers, from all adversity, and grant us to rejoice in his fellowship. Through our Lord Jesus Christ, Thy Son, Who liveth and reigneth with Thee in the unity of the Holy Ghost, one God Forever and ever. R. Amen.

Lesson from the Book of Wisdom. The Lord conducted the just through the right ways, and showed him the kingdom of God, and gave him the knowledge of holy things: made him honorable in his labors, and accomplished his labors. In the deceit of them that overreached him, He stood by him, and made him honorable. He kept him safe from his enemies, and He defended him from seducers, and gave him a strong conflict, that he might overcome, and know that wisdom is mightier than all. He forsook not the just when he was sold, but delivered him from sinners: He went down with him into the pit. And in bands He left him not, till He brought him the sceptre of the kingdom, and power against those that oppressed him: and shewed them to be liars that had accused him, and the Lord our God gave him everlasting glory.

Blessed is the man that feareth the Lord: he delighteth exceedingly in His commandments. V.: His seed shall be mighty upon earth: the generation of the righteous shall be blessed. Alleluia, alleluia. V.: (Ps. 20. 4). O Lord, Thou hast set on his head a crown of precious stones. Alleluia.

Thou hast crowned him wtih glory and honor: and hast set him over the works of Thy hands, O Lord.

Accept, we beseech Thee, O Lord, our offerings and prayers; both cleanse by these Heavenly mysteries and graciously hear us. Through our Lord Jesus Christ Thy Son our Lord, Who liveth and reigneth with Thee in the unity of the Holy Ghost, one God Forever and ever. R. Amen.

If any man will come after Me, let him deny himself and take up his cross and follow Me.

Grant, we beseech Thee, O Lord, our God, that we, who in this life joyfully assists in the commemoration of Thy saints, may hereafter rejoice in beholding them forever in Heaven. Through the Lord Jesus Christ, Thy Son, Who liveth and reigneth with Thee in the unity of the Holy Ghost, one God For ever and ever.