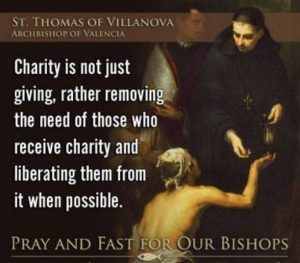 Saint Thomas was from Castile in Spain and received his surname from the town where he was raised. He received a superior education at the University of Alcala and became a popular professor of philosophy there.

After joining the Augustinian friars at Salamanca, Thomas was ordained and resumed his teaching–despite a continuing absentmindedness and poor memory. He became prior and then provincial of the friars, sending the first Augustinians to the New World. He was nominated by the emperor to the archbishopric of Granada, but refused. When the see again became vacant he was pressured to accept. The money his cathedral chapter gave him to furnish his house was given to a hospital instead. His explanation to them was that “our Lord will be better served by your money being spent on the poor in the hospital. What does a poor friar like myself want with furniture?”

He wore the same habit that he had received in the novitiate, mending it himself. The canons and domestics were ashamed of him, but they could not convince him to change. Several hundred poor came to Thomas’s door each morning and received a meal, wine, and money. When criticized because he was at times being taken advantage of, he replied, “If there are people who refuse to work, that is for the governor and the police to deal with. My duty is to assist and relieve those who come to my door.” He took in orphans and paid his servants for every deserted child they brought to him. He encouraged the wealthy to imitate his example and be richer in mercy and charity than they were in earthly possessions.

Criticized because he refused to be harsh or swift in correcting sinners, Thomas said, “Let him (the complainer) inquire whether Saint Augustine and Saint John Chrysostom used anathemas and excommunication to stop the drunkenness and blasphemy which were so common among the people under their care.”

As he lay dying, Thomas commanded that all the money he possessed be distributed to the poor. His material goods were to be given to the rector of his college. Mass was being celebrated in his presence when after Communion he breathed his last, reciting the words: “Into your hands, O Lord, I commend my spirit.”

In his lifetime Thomas of Villanova was already called “the almsgiver” and “the father of the poor.” He was canonized in 1658.

Saint Maurice was an officer of the Theban legion, a body of about 6000 men. These soldiers were Christians and loyal to their emperor and to God. Maurice was an officer of the Theban Legion of Emperor Maximian Herculius’ army, which was composed of Christians from Upper Egypt. He and his fellow legionnaires refused to sacrifice to the gods as ordered by the Emperor to insure victory over rebelling Bagaudae. When they refused to obey repeated orders to do so and withdrew from the army encamped at Octodurum (Martigny) near Lake Geneva to Agaunum (St. Maurice-en-Valais), Maximian had the entire Legion of over six thousand men put to death. To the end they were encouraged in their constancy by Maurice and two fellow officers, Exuperius and Candidus. Also executed was Victor (October 10th), who refused to accept any of the belongings of the dead soldiers. In a follow-up action, other Christians put to death were Ursus and another Victor at Solothurin (September 30th); Alexander at Bergamo; Octavius, Innocent, Adventor, and Solutar at Turin; and Gereon (October 10th) at Cologne. Their story was told by St. Eucherius, who became Bishop of Lyons about 434, but scholars doubt that an entire Legion was massacred; but there is no doubt that Maurice and some of his comrades did suffer martyrdom at Agaunum.

The Lord made to him a covenant of peace, and made him a prince: that the dignity of priesthood should be to him for ever. (Ps. 131: 1) O Lord, remember David: and all his meekness. v. Glory be to the Father and to the Son and to the Holy Ghost, as it was in the beginning, is now and ever shall be, world without end. Amen

O God, Who didst adorn blessed Thomas, Thy bishop, with the virtue of a consuming charity for the poor, we beseech Thee that, through his intercession, Thou graciously pour forth the riches of Thy mercy upon all who pray to Thee. Through the same Lord Jesus Christ, Thy Son, Who liveth and reigneth with Thee in the unity of the Holy Ghost, one God Forever and ever. R.Amen.

Commemoratio Sabbato Quattuor Temporum Septembris
Almighty, everlasting God, You Who cure body and soul through healing self-denial, we humbly entreat Your majesty to hear favorably the devout prayer of those who fast, and to grant us help for the present and the future.

Commemoration of St. Maurice and Companion Martyrs
Let us pray. Grant, we beseech Thee, O almighty God, that the solemn festival of Thy holy martyrs, Maurice and his companions, may bring us joy, that we may glory in the natal day of those upon whose patronage we lean. Through the same Lord Jesus Christ, Thy Son, Who liveth and reigneth with Thee in the unity of the Holy Ghost, one God Forever and ever. R. Amen.

Lesson from the Epistle of blessed James the Apostle. Dearly beloved, blessed is the man that endureth temptation: for when he hath been proved, he shall receive the crown of life, which God hath promised to them that love Him. Let no man, when he is tempted, say that he is tempted by God. For God is not a tempter of evils, and He tempteth no man. But every man is tempted by his own concupiscence, being drawn away and allured. Then when concupiscence hath conceived it bringeth forth sin. But sin, when it is completed, begetteth death. Do not err therefore, my dearest brethren. Every best gift, and every perfect gift, is from above; coming down from the Father of lights, with Whom there is no change, nor shadow of alteration. For of His own will hath He begotten us by the word of truth, that we might be some beginning of His creature.

I have found David, My servant; with My holy oil I have anointed him: for My hand shall help him, and My arm shall strengthen him. V. The enemy shall have no advantage over him, nor the son of iniquity have power to hurt him. Alleluia, alleluia. V. (Ps. 109: 4) Thou art a priest forever, according to the order of Melchisedech.

I have found David My servant, with My holy oil I have anointed him: for My hand shall help him, and My arm shall strengthen him. Alleluia.

May Thy saints, we beseech Thee, O Lord, in every place bring us joy; that while we commemorate their merits, we may experience their patronage. Through our Lord Jesus Christ Thy Son our Lord, Who liveth and reigneth with Thee in the unity of the Holy Ghost, one God forever and ever. R. Amen.

Commemoratio Sabbato Quattuor Temporum Septembris
Grant, we beseech You, almighty God, that the gift in the sight of Your majesty may obtain for us the grace of reverent devotion and secure eternal happiness.

Commemoration of St. Maurice and Companion Martyrs
Regard, we beseech Thee O Lord, our gifts which we bring in commemoration Thy holy martyrs, Maurice and his companions, and grant that they be made pleasing by the perpetual intercession of those In whose honor they are offered. Through our Lord Jesus Christ Thy Son our Lord, Who liveth and reigneth with Thee in the unity of the Holy Ghost, one God Forever and ever. R. Amen.

This is the faithful and wise steward, whom his lord setteth over his family: to give them their measure of wheat in due season.

O God, the rewarder of faithful souls, grant that, through the prayers of blessed Thomas, Thy confessor and bishop, whose august solemnity we celebrate, we may obtain pardon of our sins. Through the Lord Jesus Christ, Thy Son, Who liveth and reigneth with Thee in the unity of the Holy Ghost, one God For ever and ever. R. Amen.

Commemoratio Sabbato Quattuor Temporum Septembris
May Your sacrament, we beseech You, O Lord, produce in us what it contains, and may we share in reality what we now perform as a sacramental rite.

Commemoration of St. Maurice and Companion Martyrs
Let us pray. Refreshed with heavenly sacraments and joys, we, Thy suppliants, beseech Thee, O Lord, that we be protected by the assistance of those in whose triumphs we glory. Through the Lord Jesus Christ, Thy Son, Who liveth and reigneth with Thee in the unity of the Holy Ghost, one God For ever and ever.  R. Amen.

At that time, Jesus spoke to the multitudes this parable: A certain man had a fig tree planted in his vineyard; and he came seeking fruit thereon, and found none. And he said to the vine-dresser, ‘Behold, for three years now I have come seeking fruit on this fig tree, and I find none. Cut it down, therefore; why does it still encumber the ground?’ But he answered him and said, ‘Sir, let it alone this year too, till I dig around it and manure it. Perhaps it may bear fruit; but if not, then afterwards you shall cut it down.’ Now He was teaching in one of their synagogues on the Sabbath. And behold, there was a woman who for eighteen years had had a sickness caused by a spirit; and she was bent over and utterly unable to look upwards. When Jesus saw her, He called her to Him and said to her, Woman, you are delivered from your infirmity. And He laid His hands upon her, and instantly she was made straight, and glorified God. But the ruler of the synagogue, indignant that Jesus had cured on the Sabbath, addressed the crowd, saying, There are six days in which one ought to work; on these therefore come and be cured, and not on the Sabbath. But the Lord answered him and said, Hypocrites! does not each one of you on the Sabbath loose his ox or ass from the manger, and lead it forth to water? And this woman, daughter of Abraham as she is, whom Satan has bound, lo, for eighteen years, ought not she to be loosed form this bond on the Sabbath? And as He said these things, all His adversaries were put to shame; and the entire crowd rejoiced at all the glorious things that were done by Him.