A man called Alban, believed to have been a Romano-British citizen of the Roman town of Verulamium around the end of the 3rd century, gave shelter to an itinerant Christian priest, later called Amphibalus. Impressed by what he heard Alban was converted to Christianity by him. When a period of persecution, ordered by the Emperor, brought soldiers in search of the priest, Alban exchanged clothes with him allowing him to escape and it was Alban who was arrested in his place.

Standing trial and asked to prove his loyalty by making offerings to the Roman gods, Alban bravely declared his faith in “the true and living God who created all things”. This statement condemned Alban to death. He was led out of the city, across the river and up a hillside where he was beheaded.

As with all good stories the legend grew with time. Bede, writing in the 8th century elaborates the story, adding that the river miraculously divided to let him pass and a spring of water appeared to provide a drink for the saint. He also adds that the executioner’s eyes dropped out as he beheaded the saint, a detail that has often been depicted with relish since. At the time of Bede there was a church and shrine near the spot, pilgrims travelled to visit, and it became an established place of healing. He describes the hill as “adorned with wild flowers of every kind” and as a spot “whose natural beauty had long fitted it as a place to be hallowed by the blood of a blessed martyr”. There is an even earlier record of St.Germanus visiting the shrine around 429. 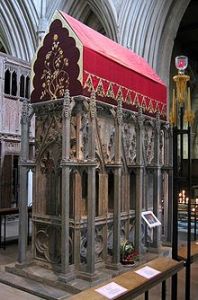 In 1968, English historian John Morris suggested that St Alban’s martyrdom took place during the persecutions under Emperor Septimius Severus in 209. Morris bases his claims on earlier manuscript sources, unknown to Bede, especially an 8th-century copy of a 3rd-century manuscript found in Turin which states, “Alban received a fugitive cleric and put on his garment and his cloak (habitu et caracalla) that he was wearing and delivered himself up to be killed instead of the priest… and was delivered immediately to the evil Caesar Severus.” St Gildas knew this source, but mistranslated the name “Severus” as an adjective, and wrongly identified the emperor as Diocletian. Bede accepted this identification as fact, and dated St Alban’s martyrdom to this later period. As Morris points out, Diocletian reigned only in the East, and would not have been involved in British affairs in 304; Severus, however, was in Britain from 208 to 211. Morris thus dates Alban’s death to 209. Subsequent scholars (W. H. C. Frend and Charles Thomas for example) have argued that such a single, localised British martyrdom in 209 would have been unusual, and have suggested the period of 251–59 (under the persecutors Decius or Valerian) as more likely.

Alban was probably buried in the Roman cemetery to the south of the present Abbey Church. Recent finds suggest an early basilica over the spot and later a Saxon Benedictine monastery was founded, probably by King Offa around 793. This was replaced in 1077 by the large Norman church and monastery, the remains of which are still partly visible in the tower and central part of the present cathedral of St Albans.

St Alban’s martyrdom is particularly remembered on and around 22nd June each year with a major festival pilgrimage and Passio; an exploration of the martyrdom through carnival.

PAULINUS was of a family which boasted of a long line of senators, prefects, and consuls. He was educated with great care, and his genius and eloquence, in prose and verse, were the admiration of St. Jerome and St. Augustine. He had more than doubled his wealth by marriage, and was one of the foremost men of his time. Though he was the chosen friend of Saints, and had a great devotion to St. Felix of Nola, he was still only a catechumen, trying to serve two masters. But God drew him to Himself along the way of sorrows and trials. He received baptism, withdrew into Spain to be alone, and then, in consort with his holy wife, sold all their vast estates in various parts of the empire, distributing their proceeds so prudently that St. Jerome says East and West were filled with his alms. He was then ordained priest, and retired to Nola in Campania. There he rebuilt the Church of St. Felix with great magnificence, and served it night and day, living a life of extreme abstinence and toil. In 409 he was chosen bishop, and for more than thirty years so ruled as to be conspicuous in an age blessed with many great and wise bishops. St. Gregory the Great tells us that when the Vandals of Africa had made a descent on Campania, Paulinus spent all he had in relieving the distress of his people and redeeming them from slavery. At last there came a poor widow; her only son had been carried off by the son-in-law of the Vandal king. “Such as I have I give thee,” said the Saint to her; “we will go to Africa, and I will give myself for your son.” Having overborne her resistance, they went, and Paulinus was accepted in place of the widow’s son, and employed as gardener. After a time the king found out, by divine interposition, that his son-in-law’s slave was the great Bishop of Nola. He at once set him free, granting him also the freedom of all the townsmen of Nola who were in slavery. One who knew him well says he was meek as Moses, priestlike as Aaron, innocent as Samuel, tender as David, wise as Solomon, apostolic as Peter, loving as John, cautious as Thomas, keen-sighted as Stephen, fervent as Apollos. He died in 431.

In Thy strength, O Lord, the just man shall joy: and in Thy salvation he shall rejoice exceedingly: Thou hast given him his heart’s desire. (Ps. 20: 4) For Thou hast prevented him with blessings of sweetness; Thou hast set on his head a crown of precious stones. v. Glory be to the Father and to the Son and to the Holy Ghost, as it was in the beginning, is now and ever shall be, world without end. Amen. Repeat In Thy strength…

God, who hast hallowed this day by the martyrdom of blessed Alban, we pray thee grant that we who take pleasure in his yearly festival may be protected by his constant help. Through Jesus Christ, thy Son our Lord, Who liveth and reigneth with thee, in the unity of the Holy Ghost, ever one God, world without end. R. Amen.

Commemoration of St Paulinus, Bishop & Confessor
Let us pray. O God, Who promised to those who forsake all things in this world for You a hundred-fold reward in the world to come and life everlasting, mercifully grant that, following closely in the footsteps of the holy Bishop Paulinus, we may look upon earthly things as nought, and long only for those of heaven. Who livest and reignest with God the Father, in the unity of the Holy Spirit, one God, world without end. R. Amen

Lesson from the Book of Wisdom. The Lord conducted the just through the right ways, and showed him the kingdom of God, and gave him the knowledge of the holy things; made him honorable in his labors, and accomplished his labors. In the deceit of them that overreached him, He stood by him, and made him honorable. He kept him safe from his enemies, and defended him from seducers, and gave him a strong conflict, that he might overcome, and know that wisdom is mightier than all. She forsook not the just when he was sold, but delivered him from sinners: she went down with him into the pit, and in bands she left him not, till she brought him the sceptre of the kingdom, and power against those that oppressed him; and showed them to be liars that had accused him: and the Lord our God gave him everlasting glory.

Blessed is the man that feareth the Lord; he delighteth exceedingly in His commandments. V. His seed shall be mighty upon earth: the generation of the righteous shall be blessed. Alleluia, alleluia. V. (Ps. 20: 4) O Lord, Thou hast set on his head a crown of precious stones. Alleluia.

Thou hast made him a little less than the angels, thou hast crowned him with glory and honour: and hast set him over the works of thy hands.

Lord, we pray that the blessed martyr Alban may lovingly plead at thy mercy-seat for us who, in revering him, proclaim thy wonders. Through Jesus Christ, thy Son our Lord, Who liveth and reigneth with thee, in the unity of the Holy Ghost, ever one God, world without end. R. Amen.

Commemoration of St Paulinus, Bishop & Confessor
Grant us, O Lord, by the example of the blessed Bishop Paulinus, to join the sacrifice of perfect charity with the offering of the altar, that by zeal for good works we may win everlasting mercy. Through Jesus Christ, thy Son our Lord, Who liveth and reigneth with thee, in the unity of the Holy Ghost, ever one God, world without end. R. Amen.

He who wishes to come after Me, let him deny himself, and take up his cross, and follow Me.

We pray, Lord, that the blessed martyr Alban may ever entreat thy holy majesty in our behalf, so that thy sacrament may cleanse our guilt away and keep is fervent in our love of thee. Through Jesus Christ, thy Son our Lord, Who liveth and reigneth with thee, in the unity of the Holy Ghost, ever one God, world without end. R. Amen.

Commemoration of St Paulinus, Bishop & Confessor
Let us pray. Bestow upon us, O Lord, through the Blessed Sacrament, that inspiration of holiness and humility which Your saintly Bishop Paulinus drew from this divine source, and, by his intercession, graciously pour forth the riches of Your grace upon all who call upon You. Through Jesus Christ, thy Son our Lord, Who liveth and reigneth with thee, in the unity of the Holy Ghost, ever one God, world without end.
R. Amen.