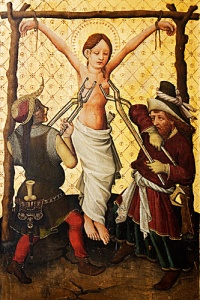 Saint Agatha, virgin and martyr (Collect), was born in Sicily of noble parentage, but she estimated that for her the highest nobility would be to belong to Jesus, Whom she took as her Spouse (Gospel).

Endowed with remarkable beauty, she had to resist the solicitations of the governor Quinitanus, who, unable to attain his end by persuasion, had recourse to violence. Her breast was torn by his order, but was healed on the following night, by the apostle St. Peter, who appeared to her in her prison (Communion). Then the body of the saint was rolled on pieces of broken pottery and on burning coals, and when she was brought back to her cell, she expired while praying. This happened at Catana in 251, during the persecution of the emperor Decius. God almighty, by granting the victory of martyrdom to a feeble woman (Collect), wished to show that He alone is our Redeemer, for it is with this “end in view that He chooses what is weak in the world to confound with their nothingness those who trust in their own strength” (Epistle).

On several occasions the virginal veil which covered the tomb of St. Agatha held up the torrents of burning lava rushing down from Etna and threatening to ruin the town. God thus honored the resistance that her very pure soul had shown to all the assaults of passion. Her name is mentioned in the Canon of the Mass. Her feast was already celebrated at Rome in the sixth century. The church of St. Agatha in Rome was made a Stational church by Pius XI in 1934 (Third Tuesday in Lent)

Let us invoke St. Agatha to preserve our homes from fire and to extinguish through the spirit of penitence, the impure flames that consume our bodies and our souls.

Let us all rejoice in the Lord, celebrating the feast in honor of blessed Agatha, Virgin and Martyr, for whose passion the angels rejoice and praise with one accord the Son of God. Ps 44:2 My heart overflows with a goodly theme; as I sing my ode to the King. V.: Glory be to the Father, and to the Son, and to the Holy Ghost. As it was in the beginning, is now, and ever shall be, world without end. Amen. Let us all rejoice in the Lord…

O God, Who among other wonders of Your power have given the victory of martyrdom even to the gentler sex, graciously grant that we who commemorate the anniversary of the death of blessed Agatha, Your Virgin and Martyr, may come to You by following her example. Through Jesus Christ, thy Son our Lord, Who liveth and reigneth with thee, in the unity of the Holy Ghost, ever one God, world without end. R. Amen.

Collect for the Saints
Defend us, we beseech Thee, O Lord, from all dangers of mind and body: and through the intercession of the blessed and glorious Mary, ever Virgin, mother of God, of St Joseph, of Thy holy apostles, Peter and Paul, and of all the saints, in Thy loving-kindness grant us safety and peace; that, all adversities and errors being overcome, Thy Church may serve Thee in security and freedom.

for the Church
Mercifully hear the prayers of thy Church, we beseech thee, O Lord, that all adversities and errors being overcome, she may serve thee in security and feedom. Through Jesus Christ, thy Son our Lord, Who liveth and reigneth with thee, in the unity of the Holy Ghost, ever one God, world without end. R. Amen.

God will help her with His countenance. God is in her midst; she shall not be disturbed. V. There is a stream whose runlets gladden the city of God; the Most High has sanctified His dwelling. Alleluia, alleluia. Ps 118:46 V. I will speak of Your decrees before kings without being ashamed. Alleluia.

At that time, there came to Jesus some Pharisees, testing Him, and saying, Is it lawful for a man to put away his wife for any cause? But He answered and said to them, Have you not read that the Creator, from the beginning, made them male and female, and said, ‘For this cause a man shall leave his father and mother, and cleave to his wife, and the two shall become one flesh’? Therefore now they are no longer two, but one flesh. What therefore God has joined together, let no man put asunder. They said to Him, Why then did Moses command to give a written notice of dismissal, and to put her away? He said to them, Because Moses, by reason of the hardness of your heart, permitted you to put away your wives; but it was not so from the beginning. And I say to you, that whoever puts away his wife, except for immorality, and marries another, commits adultery; and he who marries a woman who has been put away commits adultery. His disciples said to Him, If the case of a man with his wife is so, it is not expedient to marry. And He said, ‘Not all can accept this teaching; but those to whom it has been given. For there are eunuchs who were born so from their mother’s womb; and there are eunuchs who were made so by men; and there are eunuchs who have made themselves so for the sake of the kingdom of heaven. Let him accept it who can.

Behind her the virgins of her train are brought to the King. They are borne in to You.

Accept, O Lord, the gifts we bring on the feast of blessed Agatha, Your Virgin and Martyr, under whose patronage we hope to find salvation. Through Jesus Christ, thy Son our Lord, Who liveth and reigneth with thee, in the unity of the Holy Ghost, ever one God, world without end. R. Amen.

Secret for the Saints
Graciously hear us, O God our Saviour, and, by virtue of this Sacrament, defend us from all enemies of soul and body, bestowing upon us Thy grace here and Thy glory hereafter.

for the Church
Protect us, O Lord, who celebrate thy mysteries, that holding fast to divine things, we may serve thee with body and soul. Through Jesus Christ, thy Son our Lord, Who liveth and reigneth with thee, in the unity of the Holy Ghost, ever one God, world without end.
R. Amen.

I invoke Him, the living God, Who deigned to cure me of every wound, and to restore my breast to my body.

May the sacrament we have received help us, O Lord, and by the intercession of blessed Agatha, Your Virgin and Martyr, may it support us through Your everlasting protection. Through Jesus Christ, thy Son our Lord, Who liveth and reigneth with thee, in the unity of the Holy Ghost, ever one God, world without end.
R. Amen.

Postcommunion for the Saints
May the gift of this Divine Sacrament which we have offered, cleanse us and defend us, we beseech Thee, O Lord; and through the intercession of the Blessed Virgin Mary, mother of God, of St. Joseph, of Thy holy apostles Peter and Paul, and of all the saints, free us from all iniquity and deliver us from all adversity.

for the Church
We beseech thee, O Lord, our God, that thou permit not those, to whom thou hast given a participation of divine things to be subjected to human dangers. Through Jesus Christ, thy Son our Lord, Who liveth and reigneth with thee, in the unity of the Holy Ghost, ever one God, world without end. R. Amen.