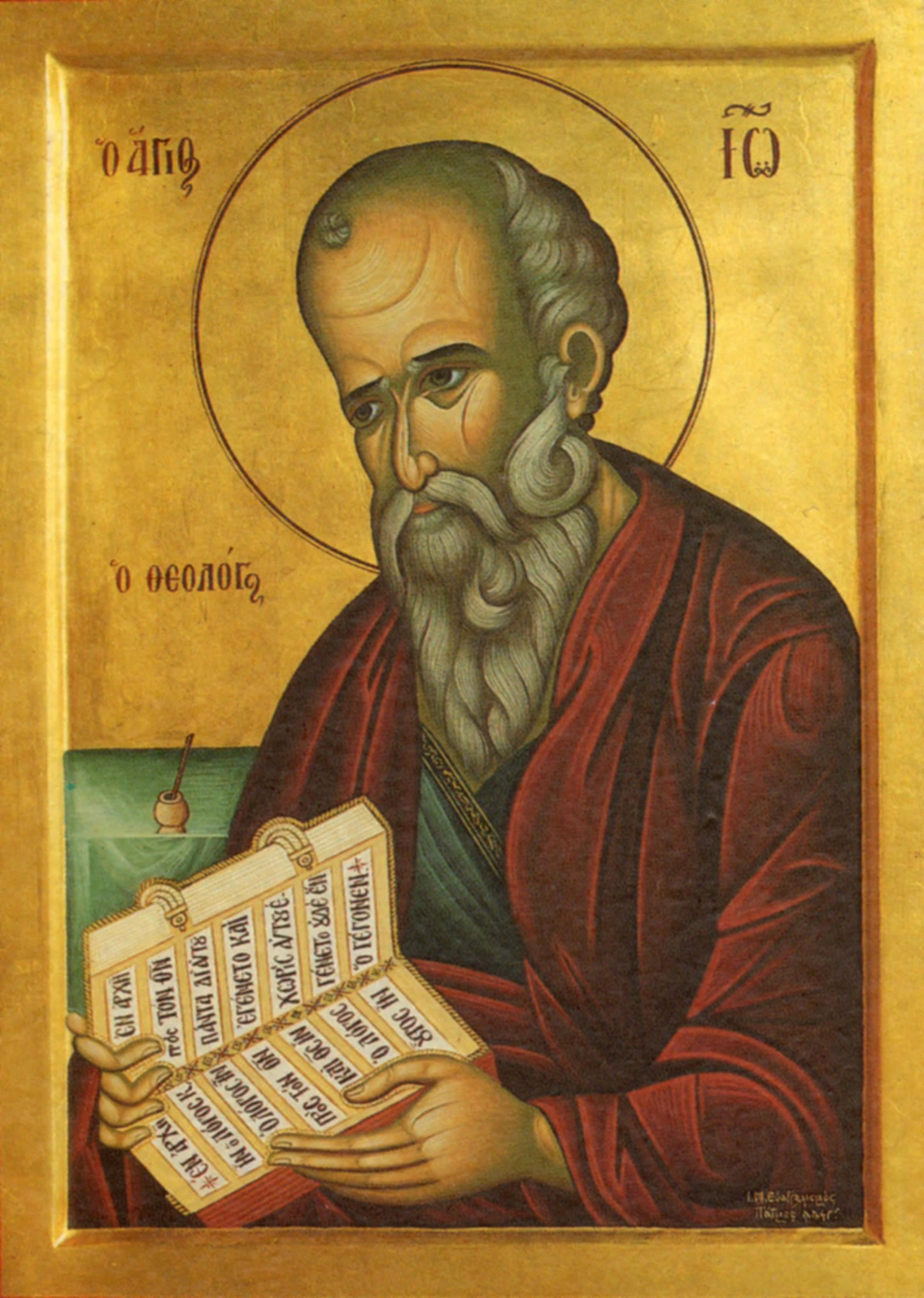 Octave Day of the Feast of St John the Evangelist, Apostle: Missa “In medio Ecclesiae”

Saint John, brother of Saint James the Greater, the Apostle of Spain, is the beloved disciple. He was privileged, with his brother and Saint Peter, to behold Our Lord raise up a dead child to life, then saw Him transfigured on the mountaintop; he alone reposed his head on His breast at the Last Supper. After the crucifixion it is he who, with Saint Peter, hastened to the empty tomb on the morning of the Resurrection. Standing beside Mary at the Cross, he had heard his Master confide that Blessed Mother to him to be henceforth his Mother also. He took his precious treasure for refuge to Ephesus when the persecution of the Jerusalem Christians became too intense; and from there he went out to evangelize Asia Minor, of which he became the first Archbishop. He was later exiled to the Island of Patmos, where he wrote the Apocalypse, but afterwards returned to Ephesus.

Compared with an eagle by his flights of elevated contemplation, Saint John is the supreme Doctor of the Divinity of Jesus of Nazareth. Endowed with an astounding memory, he was able even in his later years, to reproduce the discourses of Christ in such a way as to make the reader experience their power and impact on their audiences as if present to hear them. He is the author of five books of the New Testament, his Gospel, three Epistles, and the last canonical prophecy, the Apocalypse or Revelation of Saint John — all of which were composed after the ruin of Jerusalem in 70 A.D.

In his extreme old age he continued to visit the churches of Asia, and Saint Jerome relates that when age and weakness grew upon him so that he was no longer able to preach to the people, he would be carried to the assembly of the faithful by his disciples, with great difficulty; and every time said to his flock only these words: “My dear children, love one another.”

Saint John died in peace at Ephesus in the third year of Trajan, that is, the hundredth of the Christian era, or the sixty-sixth from the crucifixion of Christ, Saint John then being about ninety-four years old, according to Saint Epiphanus.

The Feast of St. John is the only feast of an apostle now remaining in the Christmas cycle. The station is at St. Mary Major, dedicated to the Savior; this basilica seemed the most suitable place for the celebration of the Christmas station in honor of St. John to whom the Blessed Virgin had been entrusted, both on account of the Savior’s crib there preserved, and of the mosaics of Pope Sixtus III commemorating the Council of Ephesus, held near the tomb of the Evangelist. The Gradual Is drawn from that passage of St. John’s Gospel in which reference is made to the popular belief current in the first generation of Christians in Asia that the beloved disciple should not die before the parousia or last coming of Christ. The advanced age of the Apostle, on the other hand, seemed to lend credit to this opinion. So St. John, in the very last chapter of his Gospel, desired -as a sort of final postscript- to rectify this erroneous interpretation of the Savior’s words. “So I will have him to remain till I come, what is it to thee?” The words were uttered by Our Lord merely as an hypothesis. “So (if) I will”; but in the several oral versions of the episode the conditional and hypothetical particle “If” was easily passed over; hence St. John felt the necessity of explaining the misunderstanding and setting the matter right.

In the midst of the Church the Lord opened his mouth: and filled him with the spirit of wisdom and understanding: He clothed him with a robe of glory.. (Ps. 91: 2) It is good to give praise to the Lord: and to sing to Thy Name, O Most High. v. Glory be to the Father and to the Son and to the Holy Ghost, as it was in the beginning, is now and ever shall be, world without end. Amen. Repeat In the midst of the Church…

Of Thy goodness, O Lord, shine upon Thy Church, that, enlightened by the teachings of blessed John, Thy Apostle and Evangelist, she may attain to everlasting gifts. Through our Lord Jesus Christ, Thy Son, Who liveth and reigneth with Thee in the unity of the Holy Ghost, one God, world without end. Amen.

Commemoration of the Holy Innocents
O God, Whose praise the martyred innocents did this day proclaim, not by speaking, but by dying, do to death in us all the malice of sinfulness, that our lives may also proclaim Thy faith, which our tongues profess.

Commemoration of St Thomas of Canterbury
God, for Whose Church the glorious Bishop Thomas fell by the swords of wicked men, grant, we beseech Thee, that all who implore his help may obtain the effect of their petition leading to salvation. Through Jesus Christ our Lord, Who livest and reignest, with God the Father, in the unity of the Holy Ghost, God, Forever and ever.

Lesson from the Book of Wisdom. He that feareth God will do good: and he that possesseth justice shall lay hold on her, and she will meet him as an honorable mother. With the bread of life and understanding she shall feed him and give him the water of wholesome wisdom to drink: and she shall be made strong in him, and he shall not be moved: and she shall hold him fast, and he shall not be confounded: and she shall exalt him among his neighbors, and in the midst of the Church she shall open his mouth, and shall fill him with the spirit of wisdom and understanding, and shall clothe him with a robe of glory. The Lord our God shall heap upon him a treasure of joy and gladness, and shall cause him to inherit an everlasting name.

This saying therefore went abroad among the brethren, that that disciple should not die. And Jesus did not say: He should not die. V. But: So I will have him to remain until I come: follow thou Me.

Alleluia, alleluia. V. (John 21: 24) This is that disciple who giveth testimony of these things: and we know that his testimony is true. Alleluia.

The just shall flourish like the palm tree: he shall be multiplied like the cedar that is in Libanus.

Receive, O Lord, the gifts we bring to Thee on the feast of him, by whose pleading we hope to be delivered. Through our Lord Jesus Christ, Thy Son, Who liveth and reigneth with Thee in the unity of the Holy Ghost, one God Forever and ever. R.Amen.

Commemoration of the Holy Innocents
Let not the gracious prayer of Thy saints fail us, O Lord, both to render our offerings acceptable to Thee and ever to obtain Thy pardon for us.

Commemoration of St Thomas
Sanctify, O Lord, the offerings dedicated to Thee, and, by the intercession of blessed Thomas, Thy martyr and bishop, look upon us with mercy for the sake of them. Through our Lord Jesus Christ Thy Son. Who liveth and reigneth with Thee in the unity of the Holy Ghost, one God Forever and ever. R. Amen.

It is truly meet and just, right and for our salvation, that we should at all times and in all places, give thanks unto Thee, O holy Lord, Father almighty, everlasting God, for through the Mystery of the Word made flesh, the new light of Thy glory hath shone upon the eyes of our mind, so that while we acknowledge God in visible form, we may through Him be drawn to the love things invisible. And therefore with Angels and Archangels, with Thrones and Dominations, and with all the hosts of the heavenly army, we sing the hymn of The glory, evermore saying:
HOLY, HOLY, HOLY…

This saying therefore went abroad among the brethren, that that disciple should not die. And Jesus did not say: He should not die; but: So I will have him to remain until I come.

We who have been refreshed by heavenly food and drink, humbly entreat Thee, O our God, that we may be strengthened also by the prayers of him, in whose commemoration we have received them. Through our Lord Jesus Christ, Thy Son, Who liveth and reigneth with Thee in the unity of the Holy Ghost, one God Forever and ever. R. Amen.

Commemoration of the Holy Innocents
May the votive gifts, O Lord, of which we have partaken, through the intercession of the Saints gain for us help, both for this life and life eternal.

Commemoration of St Thomas
May this communion, O Lord, cleanse us from guilt and, by the intercession of blessed Thomas, Thy martyr and bishop, make us the companions of Him Who is our heavenly healing. Through our Lord Jesus Christ, Who livest and reignest, with God the Father, in the unity of the Holy Ghost, one God For ever and ever. R. Amen.