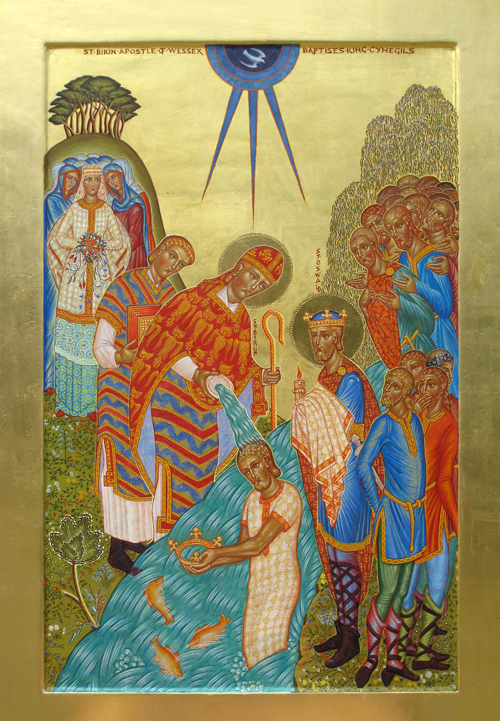 In AD 634, Birinus, a Benedictine monk of the Monastery of St Andrew on the Coelian Hill in Rome, was sent by Pope Honorius I to England to convert the West Saxons. He landed on the south coast in 635, and, within one year had reached the Thames Valley, where he achieved his greatest missionary success, the conversion of Cynegils, King of the West Saxons, who was baptised in the River Thame which runs through the garden of the Church and House.

According to Tradition, St. Birinus and King Cynegils first met on Churn Knob, near Blewbury. The conversion of King Cynegils meant that Christianity became acceptable throughout the South and West of England. St. Birinus was given ‘the city of Doric’ for his cathedral, and from Dorchester was founded the Diocese of Winchester and in 1084 the Diocese of Lincoln.

After his death on the 3rd. December 650, St. Birinus was buried in the church he had built at Dorchester. In about 680 his remains were moved by St. Headda, to Winchester where finally on 4th September 972, Bishop Ethelwold enshrined them in silver and gold.

The main centres of devotion to St. Birinus were Winchester, Dorchester and Abingdon where shrines were erected in his honour. Devotion to him continued until the 16th Century when the abbeys were dissolved and the shrines destroyed. A new “shrine” in honour of St. Birinus, incorporating some of the stones from the original shrine, has been erected in recent times in the south aisle of the old abbey church at Dorchester.

It gives good visual effect of a medieval shrine, but, alas, it contains no relics of the saint, whose bones are thought to be in a chest at Winchester Cathedral. During the Middle Ages, the Canons of Dorchester and the Monks of Winchester received permission from the Pope to hold an outdoor procession in honour of St. Birinus in Midsummer. Today, the annual pilgrimage from Churn Knob at Blewbury to Dorchester seeks to preserve this old tradition. The Feast of St Birinus is celebrated with proper solemnity on 5th December.

Grant, we beseech Thee, O almighty God, that the august solemnity of Thy blessed confessor and pontiff, Birinus, may increase our devotion and promote our salvation. Through the same Lord Jesus Christ, Thy Son, Who liveth and reigneth with Thee in the unity of the Holy Ghost, one God Forever and ever. R.Amen.

Commemoration Feria IV Advent I
Put forth Your power, O Lord, we beseech You, and come, that with You as our protector we may be rescued from the impending danger of our sins; and with You as our deliverer, may we obtain our salvation.

Commemoratio S. Sabbae abbatis
Look forgivingly on thy flock, Eternal Shepherd, and keep it in thy constant protection, by the intercession of blessed Sabbas, whom thou didst constitute Shepherd of the whole Church.

de S. Maria Advent
O God, Who, by the message of an Angel, willed to take flesh in the womb of the Blessed Virgin Mary, grant that we, your suppliants, who believe her to be truly the Mother of God, may be helped by her intercession with You.

for the Church
Mercifully hear the prayers of thy Church, we beseech thee, O Lord, that all adversities and errors being overcome, she may serve thee in security and feedom. Through Jesus Christ, thy Son our Lord, Who liveth and reigneth with thee, in the unity of the Holy Ghost, ever one God, world without end.
R. Amen.

Lesson from the Book of Wisdom. Behold a great priest, who in his days pleased God, and was found just; and in the time of wrath was made a reconciliation. There was not any found like to him, who kept the law of the Most High. Therefore by an oath the Lord made him increase among his people. He gave him the blessing of all nations, and confirmed His covenant upon his head. He acknowledged him in His blessings: He preserved for him His mercy: and he found grace before the eyes of the Lord. He glorified him in the sight of kings, and gave him a crown of glory. He made an everlasting covenant with him; and gave him a great priesthood; and made him blessed in glory. To execute the office of the priesthood and to have praise in his name, and to offer to him worthy incense for an odour of sweetness.

Behold a great priest, who in his days pleased God. V. (Eccl. 44: 20) There was not any found like to him, who kept the law of the Most High. Alleluia, alleluia. V. (Ps 109: 4 ) Thou art a priest forever according to the order of Melchisedech. Alleluia. V. This is the priest whom the Lord hath crowned. Alleluia.

By the offered gifts we beseech thee, O Lord, that thou kindly enlighten thy Church, so that thy flock may everywhere progress and prosper, and thy shepherds, under thy guidance may be pleasing to thy name. Through Jesus Christ, thy Son our Lord, Who liveth and reigneth with thee, in the unity of the Holy Ghost, ever one God, world without end. R. Amen.

Commemoration of Feria IV of Advent I
May these offerings, O Lord, cleanse us by their mighty power and thus make us come purer before You Who are their author.

Commemoratio S. Sabbae abbatis
We beseech You, O Lord, may the holy Abbot Sabbas, prevail by his prayers, so that the offerings placed upon Your sacred altar may be beneficial for our salvation.

de S. Maria Advent
Through Your mercy, O Lord, and by the intercession of blessed Mary, ever Virgin, the Mother of Your only-begotten Son, may this offering profit us for prosperity and peace, now and forevermore.

for the Church
Protect us, O Lord, who celebrate thy mysteries, that holding fast to divine things, we may serve thee with body and soul. Through Jesus Christ, thy Son our Lord, Who liveth and reigneth with thee, in the unity of the Holy Ghost, ever one God, world without end. R. Amen.

Being appeased, O Lord, guide thy Church, which has been nourished by holy refreshment, that under thy direction and powerful rule it may receive increase of liberty and may continue in religious integrity. Through Jesus Christ, thy Son our Lord, Who liveth and reigneth with thee, in the unity of the Holy Ghost, ever one God, world without end. R. Amen.

Commemoration of Feria IV of Advent I
May we receive Your mercy, O Lord, in the midst of Your temple, and thus prepare with due observance for the coming festal season of our redemption.

Commemoratio S. Sabbae abbatis
Multiply, we beseech thee, O Lord, in thy Church the spirit of grace which tho hast bestowed, that by intercession of blessed Sabbas. the obedience of the flock shall not fail the shepherd, nor the care of the shepherd be wanting to the flock.

de S. Maria Advent
May this Communion, O Lord, cleanse us of sin, and by the intercession of the Blessed Virgin Mary, the Mother of God, may it make us sharers of heavenly healing.

for the Church
We beseech thee, O Lord, our God, that thou permit not those, to whom thou hast given a participation of divine things to be subjected to human dangers. Through Jesus Christ, thy Son our Lord, Who liveth and reigneth with thee, in the unity of the Holy Ghost, ever one God, world without end.
R. Amen.