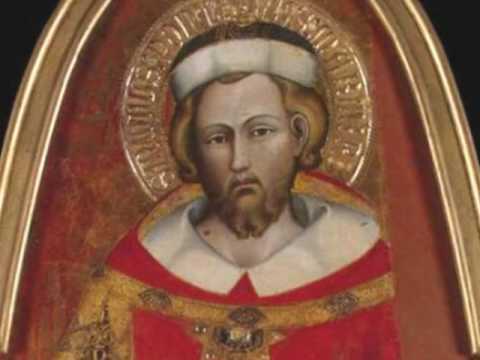 Dates of birth and death unknown. The “Liber Pontificalis” (ed. Duchesne, I, 145) gives Rome as his native city and calls his father Calpurnius. With him begins the brief chronicle of the Roman bishops of the third century, of which the author of the Liberian Catalogue of the popes made use in the fourth century and which gives more exact data for the lives of the popes. According to this account Pontian was made pope 21 July, 230, and reigned until 235. The schism of Hippolytus continued during his episcopate; towards the end of his pontificate there was a reconciliation between the schismatic party and its leader with the Roman bishop. After the condemnation of Origen at Alexandria (231-2), a synod was held at Rome, according to Jerome (Epist. XXXII, iv) and Rufinus (Apol. contra Hieron., II, xx), which concurred in the decisions of the Alexandrian synod against Origen; without doubt this synod was held by Pontian (Hefele, Konziliengeschichte, 2nd ed., I, 106 sq.). In 235 in the reign of Maximinus the Thracian began a persecution directed chiefly against the heads of the Church. One of its first victims was Pontian, who with Hippolytus was banished to the unhealthy island of Sardinia. To make the election of a new pope possible, Pontian resigned 28 Sept., 235, the Liberian Catalogue says “discinctus est”. Consequently Anteros was elected in his stead. Shortly before this or soon afterwards Hippolytus, who had been banished with Pontian, became reconciled to the Roman Church, and with this the schism he had caused came to an end. How much longer Pontian endured the sufferings of exile and harsh treatment in the Sardinian mines is unknown. According to old and no longer existing Acts of martyrs, used by the author of the “Liber Pontificalis”, he died in consequence of the privations and inhuman treatment he had to bear. Pope Fabian (236-50) had the remains of Pontian and Hippolytus brought to Rome at a later date and Pontian was buried on 13 August in the papal crypt of the Catacomb of Callistus. In 1909 the original epitaph was found in the crypt of St. Cecilia, near the papal crypt. The epitaph, agreeing with the other known epitaphs of the papal crypt, reads: PONTIANOS, EPISK. MARTUR (Pontianus, Bishop, Martyr). The word mártur was added later and is written in ligature [cf. Wilpert, “Die Papstgräber und die Cäciliengruft in der Katakombe des hl. Kalixtus” (Freiburg, 1909), 1 sq., 17 sq., Plate III]. He is placed under 13 Aug. in the list of the “Depositiones martyrum” in the chronographia of 354. The Roman Martyrology gives his feast on 19 Nov.

Be mindful of our weakness, almighty God, and because the burden of our sins weighs heavily upon us, may the glorious intercession of blessed Pontian, Your Martyr and Bishop, sustain us. Through our Lord Jesus Christ, Thy Son, Who liveth and reigneth with Thee in the unity of the Holy Ghost, God, Forever and ever.

of the Blessed Virgin Mary
Grant, we beseech thee, O Lord God, unto all thy servants, that they may remain continually in the enjoyment of soundness both of mind and body, and by the glorious intercession of the Blessed Mary, always a Virgin, may be delivered from present sadness, and enter into the joy of thine eternal gladness.

for the Pope
O God, the shepherd and ruler of all the faithful, graciously look upon thy servant N, who thou hast willed to be chief pastor of thy Church; grant him we beseech thee, by word and example to profit those over whom he rules, that together with the flock entrusted to him, he may attain to life everlasting. Through Jesus Christ, thy Son our Lord, Who liveth and reigneth with thee, in the unity of the Holy Ghost, ever one God, world without end.

Lesson from the Epistle of blessed James. Blessed is the man that endureth temptation: for when he is tried, he shall receive the crown of life, which the Lord hath promised to them that love him. Let no man say when he is tempted, I am tempted of God: for God cannot be tempted with evil, neither tempteth he any man: But every man is tempted, when he is drawn away of his own lust, and enticed. Then when lust hath conceived, it bringeth forth sin: and sin, when it is finished, bringeth forth death. Do not err, my beloved brethren. Every good gift and every perfect gift is from above, and cometh down from the Father of lights, with whom is no variableness, neither shadow of turning. Of his own will begat he us with the word of truth, that we should be a kind of first-fruits of his creatures.

The man I have found is my servant David, on him my consecrating oil has been poured my hand shall strengthen him, my arm shall give him courage. V. No enemy shall have his way with him, no emissary of wickedness shall have power to injure him. Alleluia, allelluia. v. Ps 109:4 Thou art a priest forever in the line of Melchisedech. Alleluia.

At this time, Jesus said to the multitude: If any man come to me, and hate not his father, and mother, and wife, and children, and brethren, and sisters, yea, and his own life also, he cannot be my disciple. And whosoever doth not bear his cross, and come after me, cannot be my disciple. For which of you, intending to build a tower, sitteth not down first, and counteth the cost, whether he have sufficient to finish it? Lest haply, after he hath laid the foundation, and is not able to finish it, all that behold it begin to mock him, Saying, This man began to build, and was not able to finish. Or what king, going to make war against another king, sitteth not down first, and consulteth whether he be able with ten thousand to meet him that cometh against him with twenty thousand? Or else, while the other is yet a great way off, he sendeth an ambassage, and desireth conditions of peace. So likewise, whosoever he be of you that forsaketh not all that he hath, he cannot be my disciple.

My faithfulness and mercy shall go with him: as my champion he shall rise to greatness.

By the offered gifts we beseech thee, O Lord, that thou kindly enlighten thy Church, so that thy flock may everywhere progress and prosper, and thy shepherds, under thy guidance may be pleasing to thy name. Through Jesus Christ, thy Son our Lord, Who liveth and reigneth with thee, in the unity of the Holy Ghost, ever one God, world without end. R. Amen.

of the Blessed Virgin Mary
Through thy mercy, O Lord, and the intercession of blessed Mary ever Virgin, may this oblation obtain for us prosperity and peace both now and forever.

for the Pope
Look down favorably, O Lord, we beseech thee, upon the gifts we have offered: and let thy constant protection direct thy servant N, whom tho hast chosebn to be the chief pastor of the Church. Through Jesus Christ, thy Son our Lord, Who liveth and reigneth with thee, in the unity of the Holy Ghost, ever one God, world without end. R. Amen.

It is truly meet and just, right and for our salvation, to entreat Thee humbly, O Lord, that Thou wouldst not desert Thy flock. O everlasting Shepherd; but through Thy blessed Apostles, wouldst keep it under Thy constant protection; that it may be governed by those same rulers, whom as vicars of Thy work, Thou didst set over it to be its pastors. And therefore with Angels and Archangels, with Thrones and Dominations, and with all the hosts of the heavenly army, we sing the hymn of The glory, evermore saying:

Once for all I have pledged my inviolable word, his posterity shall continue forever; his royalty too, shall last on in my presence like the sun, like the moon’s eternal orb; the witness of heaven is unalterable.

Being appeased, O Lord, guide thy Church, which has been nourished by holy refreshment, that under thy direction and powerful rule it may receive increase of liberty and may continue in religious integrity. Through Jesus Christ, thy Son our Lord, Who liveth and reigneth with thee, in the unity of the Holy Ghost, ever one God, world without end. R. Amen.

of the Blessed Virgin Mary
Grant, O Lord, that we, who had partaken of the aids of salvation, may be everywhere protected by the patronage of blessed Mary ever Virgin, in whose honor we have offered these gifts of thy majesty.

for the Pope
Let the reception of this divine Sacrament protect us, O Lord, we beseech thee: and may thy servant N, whom thou has chosen as the chief pastor of thy Church, along with the flock committed to him derive always from it protection and help. Through Jesus Christ, thy Son our Lord, Who liveth and reigneth with thee, in the unity of the Holy Ghost, ever one God, world without end. R. Amen.