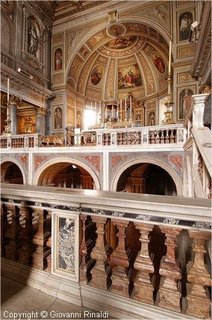 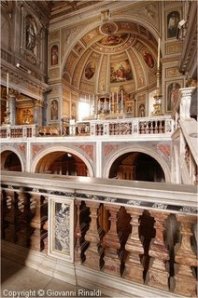 Grant, we beseech Thee, O almighty God,
that we who have undertaken to chastise our bodies by fasting may,
even in this devotion, find cause for rejoicing:
forasmuch as earthly passions being thereby subdued,
we are the better able to fix our hopes on the delights of Heaven.
Through Our Lord…

The Station is at the church of Saints Sylvester and Martin, which is one of the most venerable in Rome. It was originally built by Pope St. Sylvester, and still bears his name: but in the sixth century, it was consecrated to St. Martin of Tours. In the seventh century, it was enriched with the relics of Pope Saint Martin, which were brought from Chersonesus, where he had died a martyr a few years before. This church was the first Title of St. Charles Borromeo. It was also that of the learned liturgiologist, the Blessed Joseph-Mary Tommasi, whose body is now venerated in this church, and has been miraculously preserved, even to this day, in a state of incorruption.

Through the zeal of Pope Symmachus, two oratories were erected beside the ancient titulus equitii, dedicated to the first two confessors to whom after the martyrs liturgical cultus was paid, Sts. Martin and Sylvester. It is located on the Esquiline hill.

The Mass dates only from the time of Pope Gregory II; the sung parts are from other feasts. Both the Epistle and the Gospel recount a miracle of raising the dead to life; St. Martin of Tours was celebrated as the resuscitator of three dead persons. The story of Elisaeus is an example of the discretion needed by superiors in dealing with those under their care.

The full name of this church is Santi Martino e Silvestro ai Monti. At first glance, one would hardly guess that it is ancient in foundation, important in the history of the Church, and endowed with many spiritual treasures. Its origins reach back to the era of the imperial persecutions when it was a domus Dei, a house church, known as titulus Equitii, probably because the house or land belonged to a priest named Equitius. The original church was built by Saint Sylvester (314-335) and restored in the early sixth century when it was dedicated to St. Martin of Tours (317-397) and Pope St. Sylvester. The crypt shows signs of the ancient alternate name of the church as “San Martino in Thermis.” It was the site of the preparatory meetings for the Council of Nicaea in 325 and the site of a diocesan Council over which both Constantine and Sylvester presided. It was here, in fact, that the Nicene Creed was first proclaimed in Rome. Also, the heretical books of Arius, Sabellius, and Victorius were burnt here.

The entire church was restored in 1650 by the Carmelites who were given the church and convent. Saint Charles Borromeo restored the ceiling. (Before their election, both Pius XI and Paul VI also had the title here.) There are two very interesting, 16th century paintings on the left wall: St. Peter and St. John Lateran Basilicas as they were in medieval times. Notice also the chapel where St. Sylvester is said to have celebrated Mass. His papal throne is preserved here, together with his miter. He is reported to be the first Latin bishop to assume the miter and this one is said to be the oldest in Christendom. Under the main altar are the relics of Pope St. Martin I (649-655) and the relics of Sts. Artemius, Paulina, and Sisinnius.

In the crypt an altar encases the relics of St. Sylvester, along with Popes Sergius, Fabian, Stephan I, Soter, Cyriacus, Anastatius, and Innocent I. Sergius II (844-847) likewise enshrined here many other relics of martyrs taken from the catacombs of Saint Priscilla which, as an ancient dedication reads, “are known only to God.” Off the crypt on the left side is the entrance to the excavations of the ancient titulus. Scholars have surmised that this ancient house had ground-floor windows, an inner court, and was of two levels, as were most of the plebian houses of that time. However, the room beyond the vestibule was vaulted and looks as if the builder planned it for a meeting place and sanctuary large enough to hold about four hundred people. As such, it is the only known assembly hall of this type to exist. The church was formally erected as a station by Gregory II (715-731). During the ninth century, it was known as a Deaconry. Today it is cared for by the Carmelite Fathers.

O God, teacher and ruler of Thy people,
drive away the sins by which they are assailed:
so that they may be ever pleasing to Thee;
and secure under Thy protection:
through Our Lord…