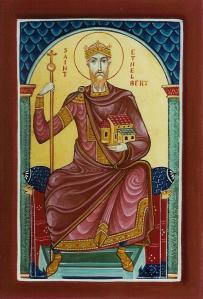 HE was king of Kent, the fifth descendant from Hengist, who first settled the English Saxons in Britain, in 448, and the foundation of whose kingdom is dated in 455. Ethelbert married, in his father’s life-time, Bertha, the only daughter of Charibert, king of Paris, and cousin-german to Clotaire, king of Soissons, and Childebert, king of Austrasia, whose two sons, Theodobert, and Theodoric, or Thierry, reigned after his death, the one in Austrasia, the other in Burgundy. Ethelbert succeeded his father Ermenric, in 560. The kingdom of Kent having enjoyed a continued peace for about a hundred years, was arrived at a degree of power and riches, which gave it a pre-eminence in the Saxon heptarchy in Britain, and so great a superiority and influence over the rest, Ethelbert is said by Bede to have ruled as far as the Humber, and Ethelbert is often styled king of the English. His queen Bertha was a very zealous and pious Christian princess, and by the articles of her marriage had free liberty to exercise her religion; for which purpose she was attended by a venerable French prelate, named Luidhard, or Lethard, bishop of Senlis. He officiated constantly in an old church dedicated to St. Martin, lying a little out of the walls of Canterbury. The exemplary life of this prelate, and his frequent discourses on religion, disposed several Pagans about the court to embrace the faith. The merit of the queen in the great work of her husband’s conversion is acknowledged by our historians, and she deserved by her piety and great zeal to be compared by St. Gregory the Great, to the celebrated St. Helen.

Divine providence, by these means, mercifully prepared the heart of a great king to entertain a favourable opinion of our holy religion, when St. Augustine landed in his dominions: to whose life the reader is referred for an account of this monarch’s happy conversion to the faith. From that time he appeared quite changed into another man, it being for the remaining twenty years of his life his only ambition and endeavour to establish the perfect reign of Christ, both in his own soul and in the hearts of all his subjects. His ardour in the exercises of penance and devotion never suffered any abatement, this being a property of true virtue, which is not to be acquired without much labour and pains, self-denial and watchfulness, resolution, and constancy. Great were, doubtless, the difficulties and dangers which he had to encounter in subduing his passions, and in vanquishing many obstacles which the world and devil failed not to raise: but these trials were infinitely subservient to his spiritual advancement, by rousing him continually to greater vigilance and fervour, and by the many victories and the exercise of all heroic virtues of which they furnished the occasions. In the government of his kingdom, his thoughts were altogether turned upon the means of best promoting the welfare of his people. He enacted most wholesome laws, which were held in high esteem in succeeding ages in this island: he abolished the worship of idols throughout his kingdom, and shut up their temples, or turned them into churches. His royal palace at Canterbury he gave for the use of the archbishop St. Austin: he founded in that city the cathedral called Christ Church, and built without the walls the abbey and church of SS. Peter and Paul, afterwards called St. Austin’s. The foundation of St. Andrew’s at Rochester, St. Paul’s at London, and many other churches, affords many standing proofs of his munificence to the church, and the servants of God. He was instrumental in bringing over to the faith of Christ, Sebert, king of the East-Saxons, with his people, and Redwald, king of the East-Angles, though the latter afterwards relapsing, pretended to join the worship, of idols with that of Christ. King Ethelbert, after having reigned fifty-six years, exchanged his temporal diadem for an eternal crown, in 616, and was buried in the church of SS. Peter and Paul. His remains were afterwards deposited under the high altar in the same church, then called St. Austin’s. St. Ethelbert is commemorated on this day in the British and Roman Martyrologies: he was vulgarly called by our ancestors St. Albert, under which name he is titular saint of several churches in England; particularly of one in Norwich, which was built before the cathedral, an account of which is given by Blomfield, in his history of Norfolk, and the city of Norwich. Polydore Virgil tells us that a light was kept always burning before the tomb of St. Ethelbert, and was sometimes an instrument of miracles, even to the days of Henry VIII.

The mouth of the just shall meditate wisdom, and his tongue shall speak judgment: the law of his God is in his heart. (Ps. 36: 1) Be not emulous of evil-doers; nor envy them that work iniquity. v. Glory be to the Father and to the Son and to the Holy Ghost, as it was in the beginning, is now and ever shall be, world without end. Amen.

God, who hast crowned thy confessor, the blessed king Ethelbert, with everlasting glory, we pray thee grant that we may so revere him on earth as to be counted worthy to reign with him in heaven. Through Jesus Christ, thy Son our Lord, Who liveth and reigneth with thee, in the unity of the Holy Ghost, ever one God, world without end. R. Amen.

Lesson from the Book of Wisdom. Blessed is the man that is found without blemish, and that hath not gone after gold, nor put his trust in money nor in treasures. Who is he, and we will praise him? For he hath done wonderful things in his life. Who hath been tried thereby, and made perfect, he shall have glory everlasting: he that could have transgressed, and hath not transgressed, and could do evil things, and hath not done them: therefore are his goods established in the Lord, and all the church of the saints shall declare his alms.

The just man shall flourish like the palm-tree: he shall grow up like the cedar of Libanus in the house of the Lord. V. (Ps. 91: 3) To show forth Thy mercy in the morning, and Thy truth in the night.

A blessed man is he who fears the Lord, bearing all love to his commandments. V. Children of his shall win renown in their own country: ever the sons of the just shall  find a blessing. V. Esteem dwells with such a man and great prosperity: fame shall record his gracious deeds eternally.

At that time, Jesus said to His disciples: “At that time, Jesus said to His disciples, Let your loins be girt, and lamps burning in your hands, and you yourselves like to men, who wait for their lord, when he shall return from the wedding; that when he cometh and knocketh, they may open to him immediately. Blessed are those servants, whom the Lord when He cometh, shall find watching. Amen, I say to you, that He will gird Himself, and make them sit down to meat, and passing will minister unto them. And if He shall come in the second watch, or come in the third watch, and find them so, blessed are those servants. But this know ye, that if the householder did know at what hour the thief would come, he would surely watch, and would not suffer his house to be broken open. Be ye then also ready; for at what hour you think not, the Son of man will come.”

My truth and My mercy shall be with him: and in my name shall his horn be exalted.

We offer Thee, O Lord, sacrifices of praise in commemoration of Thy saints, by whom we trust to be delivered from evils both present and future. Through Jesus Christ, thy Son our Lord, Who liveth and reigneth with thee, in the unity of the Holy Ghost, ever one God, world without end. R. Amen.

Blessed is the servant, whom when the Lord shall come, He shall find watching: Amen I say to you, He shall set him over all his goods.

We, Thy suppliants, who are refreshed with Heavenly food and drink, beseech Thee, O our God, that we may be fortified by the prayers of him in whose commemoration we have par-taken of these gifts. Through Jesus Christ, thy Son our Lord, Who liveth and reigneth with thee, in the unity of the Holy Ghost, ever one God, world without end. R. Amen.