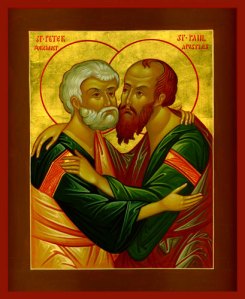 Today’s Double of the First Class Feast has a Common Octave with two stations, the one at St. Peter’s, the other at St. Paul’s. On June 29 A.D. 67, St. Peter was crucified, head downward, by order of Nero, on a hill overlooking the Vatican. On the same day, St. Paul was beheaded outside one of the gates of Rome. The Romans celebrated this feast with splendor equal to, if not surpassing, that of Easter. There are two stations, the one at St. Peter’s, the other at St. Paul’s, but in both Masses the Collects are common to the two apostles indissolubly united in a single prayer. It is just because of this ancient feeling which is common not only to the Romans, but to all the Fathers, that the two Founders of the Roman Church can never be divided. Tradition has preserved the memory of the places in which St. Peter and St. Paul dwelt. It is certain the chair of St. Peter and the chains of St. Paul were carefully guarded. The Vatican Basilica is erected over the burial place of St. Peter: the Ostian Basilica, St. Paul’s-Outside-the-Walls, honors the Apostle of the Gentiles.

St. Peter, the first pope, speaks in the name of Christ Who has communicated to him His doctrine of infallibility. He is not guided by flesh and blood, but by the Heavenly Father Who does not permit the gates of hell to prevail against the Church of which He is the foundation (Gospel). St. Peter on receiving the keys is placed at the head of the “kingdom of Heaven” upon earth, that is to say the Church, the New Jerusalem, and he reigns in the name of Christ Who has invested him with His power and supreme authority (Gospel).

The names of St. Peter and St. Paul head the names of the apostles in the Canon of the Mass. With “the Church which did not cease praying to God for St. Peter” (Epistle), let us pray for his successor “the servant of God, our Holy Father the Pope” (Canon of the Mass).

Now I know in very deed, that the Lord hath sent His angel, and hath delivered me out of the hand of Herod, and from all the expectation of the people of the Jews. (Ps. 138: 1, 2) Lord, Thou hast proved me, and known me: Thou hast known my sitting down, and my rising up. v. Glory be…etc

O God, Who hast consecrated this day to the martyrdom of Thine apostles Peter and Paul, grant to Thy Church in all things to follow their teaching from whom it received the right ordering of religion in the beginning. Through our Lord Jesus Christ, Thy Son, Who liveth and reigneth with Thee in the unity of the Holy Ghost, God, Forever and ever.

Commemoration of Nat. SJB
O God, Who hast made this day honorable to us on account of the birth of blessed John, grant Thy people the grace of spiritual joys, and direct the minds of all the faithful in the way of everlasting salvation. Through our Lord Jesus Christ, Thy Son, Who liveth and reigneth with Thee in the unity of the Holy Ghost, God, Forever and ever.

Lesson from the Acts of the Apostles. In those days, Herod the king stretched forth his hands to afflict some of the Church: and he killed James, the brother of John, with the sword; and seeing that it pleased the Jews, he proceeded to take up Peter also. Now it was in the days of the Azymes: and when he had apprehended him, he cast him into prison, delivering him to four files of soldiers to be kept, intending after the pasch to bring him forth to the people. Peter therefore was kept in prison: but prayer was made without ceasing by the Church unto God for him. And when Herod would have brought him forth, the same night Peter was sleeping between two soldiers, bound with two chains; and the keepers before the door kept the prison: and behold an angel of the Lord stood by him, and a light shined in the room and he striking Peter on the side, raised him up, saying, Arise quickly; and the chains fell off from his hands: and the angel said to him, Gird, thyself and put on thy sandals; and he did so: and he said to him, Cast thy garment about thee and follow me: and going out he followed him: and he knew not that it was true which was done by the angel; but he thought he saw a vision. And passing through the first and the second ward, they came to the iron gate that leadeth to the city, which of itself opened to them; and going out, they passed on through one street, and immediately the angel departed from him. And Peter coming to himself, said, Now I know in very deed that the Lord hath sent His angel, and hath delivered me out of the hand of Herod, and from all the expectation of the people of the Jews.

Thou shalt make them princes over all the earth: they shall remember Thy name, O Lord. V. Instead of Thy fathers, sons are born to Thee; therefore shall people praise Thee. Alleluia, alleluia. V. (Matt 16: 18.) Thou art Peter, and upon this rock I will build My Church. Alleluia.

At that time, Jesus came into the quarters of Cæsarea Philippi, and He asked His disciples, saying, ” “Whom do men say that the Son of man is?” But they said, Some, John the Baptist, and other some, Elias, and others, Jeremias, or one of the prophets. Jesus saith to them, “But whom do you say that I am? Simon Peter answered, Thou art Christ, the Son of the living God. And Jesus answering, said to him, “Blessed art thou, Simon BarJona, because flesh and blood hath not revealed it to thee, but My Father Who is in Heaven: and I say to thee, that thou art Peter, and upon this rock I will build My church, and the gates of hell shall not prevail against it; and to thee I will give the keys of the kingdom of Heaven; and whatsoever thou shalt bind upon earth, it shall be bound also in Heaven; and whatsoever thou shalt loose on earth, it shall be loosed also in Heaven.”

Thou shalt make them princes over all the earth: they shall remember Thy name, O Lord, throughout all generations.

May the prayer of Thine apostles, O Lord, accompany the sacrifices which we offer to be consecrated to Thy name, and through it do Thou grant us to be pardoned and defended. Through our Lord Jesus Christ, Thy Son, Who liveth and reigneth with Thee in the unity of the Holy Ghost, one God Forever and ever.

Commemoration Nat. SJB
We heap Thine altars with gifts, O Lord, celebrating with fitting honor the nativity of him who heralded the coming of the Saviour, and pointed Him out when He had come,Our Lord Jesus Christ, and reignest, in the unity of the Holy Ghost, God. Through our Lord Jesus Christ Thy Son our Lord, Who liveth and reigneth with Thee in the unity of the Holy Ghost, one God Forever and ever.

It is truly meet and just, right and for our salvation, to entreat Thee humbly, O Lord, that Thou wouldst not desert Thy flock, O everlasting Shepherd; but, through Thy blessed apostles, wouldst keep it under Thy constant protection; that it may be governed by those same rulers, whom as vicars of Thy work, Thou didst set over it to be its pastors. And therefore with Angels and Archangels, with Thrones and Dóminations and with all the hosts of the Heavenly army, we sing the hymn of Thy glory, evermore saying:

Thou art Peter: and upon this rock I will build My Church.

Preserve, O Lord from all dangers, by the intercession of Thine apostles, those whom Thou hast filled with Heavenly nourishment. Through the same Lord Jesus Christ, Thy Son, Who liveth and reigneth with Thee in the unity of the Holy Ghost, one God, For ever and ever.

Commemoration of Nat. SJB
May Thy Church, O God, be joyful at the birth of blessed John the Baptist, through whom she knew the Author of her regeneration, our Lord Jesus Christ,Thy Son. Who with Thee livest and reignest, in the unity of the Holy Ghost, God. Through the Lord Jesus Christ, Thy Son, Who liveth and reigneth with Thee in the unity of the Holy Ghost, one God For ever and ever.