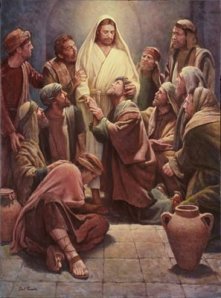 Station at the St. Paul-Outside-the-Walls. After visiting St. Peter‘s, it was fitting that the neophytes should at once be brought to the Doctor of the Gentiles, beside whose tomb they had learned the first rudiments of the new law of the Gospel. Therefore in the Lesson from the Acts of the Apostles chosen for today, it is Paul who announces to the faithful the Resurrection of the Savior as Peter did on Easter Monday.

The Gospel from St. Luke describes the first appearance of Jesus to the Apostles. As the Resurrection of Our Lord is the central tenet of the Christian faith, so the Divine Wisdom, in order to take away all excuse for the unbelief of the synagogue, willed that the miracle should be proved beyond all possibility of doubt.

In the Prayer with solemn simple words a rule of life is set forth today surpassing the heights to which any mere human mind could rise. The Church prays that God may grant to the baptized realization of all which Baptism means inasmuch as it communicates the very life of Jesus Christ Himself. In the Postcommunion the Church teaches that there are two kinds of Communion, the sacramental and the spiritual. By the first we partake actually of the body and blood of Christ; by the second we live by the spirit of the Eucharist. As the sacramental Communion can be received only at certain times and in certain places, Our Lord unites the soul so intimately to Himself in the Holy Eucharist that it lives by His spirit and breathes in unison with His heart. Such, in its highest sense, is spiritual Communion.

He gave them the water of wisdom to drink, alleluia: she shall be made strong in them, and shall not be moved, alleluia: and He shall exalt them forever, alleluia, alleluia. (Ps. 104: 1) Give glory to the Lord, and call upon His name: declare His deeds among the gentiles. V. Glory be to the Father, and to the Son, and to the Holy Ghost, as it was in the beginning, is now, and ever shall be, world without end. Amen. REPEAT: He gave them the water of wisdom…

O God, Who dost continually enrich Thy Church with new increase, grant to Thy people that they may by their good life hold fast to the sacrament which they have received by faith.  Through our Lord Jesus Christ, Who livest and reignest, with God the Father, in the unity of the Holy Ghost, one God For ever and ever. R. Amen.

Lesson from the Acts of the Apostles. In those days, Paul standing up, and with his hand bespeaking silence, said, Men, brethren, children of the stock of Abraham, and whosoever among you fear God, to you the word of this salvation is sent. For they that inhabited Jerusalem, and the rulers thereof, not knowing Him, nor the voices of the prophets which are read every Sabbath, judging Him have fulfilled them; and finding no cause of death in Him, they desired of Pilate that they might kill Him. And when they had fulfilled all things that were written of Him, taking Him down from the tree, they laid Him in a sepulchre. But God raised Him up from the dead the third day; Who was seen for many days by them who came up with Him from Galilee to Jerusalem, who to this present time are His witnesses to the people. And we declare unto you that the promise which was made to our fathers, the same God hath fulfilled to our children, raising up Our Lord Jesus Christ.

GRADUAL
This is the day which the Lord hath made: let us be glad and rejoice therein. V. (Ps. 106: 2) Let those now speak who have been redeemed by Our Lord: whom He hath redeemed out of the hand of the enemy, and gathered out of the nations. Alleluia, alleluia V. The Lord is risen from the sepulchre, who for us hung upon a tree.

SEQUENCE
Christians! to the Paschal Victim offer your thankful praises.
The Lamb the sheep redeemeth: Christ, who only is sinless, reconcileth sinners to the Father.
Death and life contended in that conflict stupendous: the Prince of Life, who died, deathless reigneth.
Speak, Mary, declaring what thou sawest wayfaring.
“The tomb of Christ who now liveth: and likewise the glory of the Risen.
Bright Angels attesting, the shroud and napkin resting.
Yea, Christ my hope is arisen: to Galilee He goeth before you.”
We know that Christ is risen, henceforth ever living: Have mercy, Victor King, pardon giving. Amen. Alleluia.

At that time, Jesus stood in the midst of His disciples, and saith to them, “Peace be to you, it is I, fear not.” But they being troubled and frighted, supposed that they saw a spirit. And He said to them, “Why are you troubled, and why do thoughts arise in your hearts? See My hands, and My feet, that it is I Myself; handle Me, and see: for a spirit hath not flesh and bones, as you see Me to have.” And when He had said this, He showed them His hands, and His feet. But while they yet believed not, and wondered for joy, He said, “Have you here anything to eat?” And they offered Him a piece of broiled fish, and a honeycomb; and when He had eaten before them, taking the remains, He gave to them. And He said to them, “These are the words which I spoke to you while I was yet with you, that all things must needs be fulfilled which are written in the law of Moses, and in the prophets, and in the psalms, concerning Me.” Then He opened their understanding, that they might understand the Scriptures. And He said to them, “Thus it is written, and thus it behooved Christ to suffer, and to rise again from the dead the third day; and that penance and remission of sins should be preached in His name among all nations.”

The Lord thundered from Heaven, and the Most High gave His voice: and the fountains of water appeared, alleluia.

Receive O Lord the prayers of the faithful with the offerings of sacrifices, that through these offices of pious devotion we may pass to Heavenly glory. Through our Lord Jesus Christ Thy Son. Who liveth and reigneth with Thee in the unity of the Holy Ghost, one God Forever and ever. R.Amen.

Pour forth upon us, O Lord, the spirit of Thy love, that, by Thy loving-kindness, thou mayest make to be of one mind those whom Thou hast satisfied with the Paschal Sacraments. Through our Lord Jesus Christ, Who livest and reignest, with God the Father, in the unity of the Holy Ghost, one God For ever and ever. R. Amen.