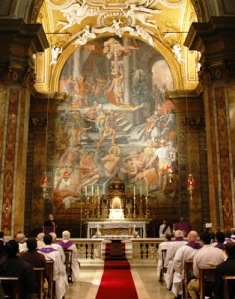 Behold with kindness, we beseech Thee O Lord,
the devotion of Thy people, that they,
who are now mortified in body by abstinence,
may be refreshed in soul by the fruit of their good work. Through our Lord…

Collecta at St. Agatha in Monasterio. Station at St. Lawrence in Panisperna.

The titular church of the famous deaconry of the Suburra was dedicated to the Sicilian martyr Agatha; in the eighth century a monastery was attached to it.

St. Lawrence in Panisperna on the Viminal marks the spot of his martyrdom. Pope Gregory II who instituted this station with a graceful allusion to the splendor of the sepulchral Basilica, called the Speciosa, (St. Lawrence-outside-the­Walls) in the Introit celebrates the sanctity of the great archdeacon, to whose prayers the early Fathers especially attributed the final triumph at Rome of the cross over paganism.

The Mass dwells on fasting and prayer; the Gospel recalls the woman of Chanaan who, by humility and perseverance in prayer, obtained the cure of her daughter. Our Lord at first appeared to refuse to perform a miracle in favor of a Gentile woman; the cure of her daughter showed the mercy of God calling to penance the Chanaanite and the publican.

Grant, Lord, to Christian peoples
an understanding of their faith
and a love of the heavenly gift
to which they have recourse;
through Our Lord…