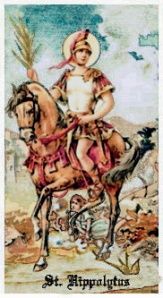 St. Hippolytus, an officer of the body-guard of the emperor Decius, had been born in the darkness of idolatry, but he had become a Christian, with all his household, in consequence of witnessing the many miracles which St. Lawrence performed while in the prison under his charge. He had also been present when the saint, lying on the red-hot gridiron, endured the most terrible tortures. At the sight of the heroism of St. Lawrence, he was filled with the desire to denounce himself a Christian, but he was prevented by St. Lawrence. But when this martyr had gloriously ended his combat, Hippolytus, with the assistance of a priest, named Justinus, buried the sacred remains with great devotion and veneration. The emperor on being informed of it, had Hippolytus seized and brought before him. He asked him if it was true that he had become a Christian? Hippolytus answered firmly: “Yes, I am a Christian, and moreover resolved to die such.” The emperor, who had always highly esteemed him, endeavored, first by promises and then by menaces, to induce him to forsake Christ. As, however, all was unavailing, he caused him to be tortured.

He was accordingly stretched on the ground, whipped with scourges, and beaten with clubs so fearfully, that it was believed he could not survive. But God, by a visible miracle, prolonged his life. Keeping his eyes fixed upon Heaven, he frequently repeated: “I am a Christian, I suffer for Christ’s sake.” After having been tormented for a long time, he was cast into prison, and the prefect received the order to behead him. Before executing this order, however, he went to the house of Hippolytus to secure his property. Finding the entire household had become Christians, he took them beyond the gates of the city and had them beheaded. Concordia, an old and holy matron, who had been Hippolytus’ nurse, was scourged until she expired, because she encouraged the others to remain firm in their faith. At last, Hippolytus was taken out of prison and fastened to the tails of two horses, and dragged by them until he was torn to pieces, and his heroic soul was in the presence of Him Whom he had so fearlessly confessed.

On the same day, though at another place, St. Cassian suffered a martyrdom of unprecedented cruelty. This saint, was bishop of Brescia, but had been banished from his See on account of his faith. He intended to go to Rome and offer the Pope his services for the salvation of souls in some other place. On his way, he changed his mind, and taking up his residence at Imola, a town in Italy, he resolved to teach children to read and write, hoping that occasion would not be wanting to do good. In this apparently humble position, he was no less zealous than he had been in the administration of his diocese. He taught the children with love and gentleness, and endeavored to inspire them with respect for the Christian faith, fear and horror of sin, and love of virtue and piety. He continued in this occupation with great zeal for some years, to the great benefit of young and old, when suddenly a terrible persecution of the Christians arose.

He was one of the first who were taken prisoners. The tyrant commanded him to sacrifice to the gods. The holy bishop and teacher refused, as might have been expected, and tried to convince the judge of his fearful blindness in worshipping dumb idols or making gods of godless men. The tyrant, furious at his arguments, ordered the executioners to strip him of his clothes and tie his hands behind his back, and leave him exposed to the mercy of the children whom he had taken such pains to teach. The children, who had been taught that Cassian was a magician and consequently must die a most painful death, took their sharp iron pencils with which, in those days, they wrote upon their wax tablets, and pierced him with them till the blood ran profusely from his veins. This torture lasted long and was extremely painful. The saint, however, never complained of the ingratitude of his pupils, nor gave a sign of impatience, but praised and thanked the Lord until his soul went to Heaven to receive the crown of martyrdom.

Praise and beauty are before Him: holiness and majesty in His sanctuary. (Ps. 95: 1) Sing ye to the Lord a new canticle; sing to the Lord all the earth. v. Glory be…etc

Grant us, we beseech Thee O almighty God, to extinguish the flames of our evil dispositions, as Thou didst grant blessed Lawrence to overcome the fires of his torments. Through our Lord Jesus Christ, Thy Son, Who liveth and reigneth with Thee in the unity of the Holy Ghost, God, Forever and ever. R. Amen.

Commemoratio Ss. Mart. Hippolyti et Cassiani.
Grant, we beseech You, almighty God, that the great festival of Your blessed Martyrs, Hippolytus and Cassian, may further both our holiness and our salvation.  Through Jesus Christ, thy Son our Lord, Who liveth and reigneth with thee, in the unity of the Holy Ghost, ever one God, world without end. R. Amen.

Lesson from the Epistle of blessed Paul the Apostle to the Corinthians. Brethren, He who soweth sparingly, shall also reap sparingly: and he who soweth in blessings, shall also reap of blessings. Everyone as he hath determined in his heart; not with sadness, or of necessity; for God loveth a cheerful giver. And God is able to make all grace abound in you; that ye, always having all sufficiency in all things, may abound to every good work; as it is written, He hath dispersed abroad, He hath given to the poor: His justice remaineth forever. And He that ministereth seed to the sower, will both give you bread to eat, and will multiply your seed, and increase the growth of the fruits of your justice.

Thou hast proved my heart, O Lord, and visited it by night. V. Thou hast tried me by fire, and iniquity hath not been found in me. Alleluia, alleluia. V. The levite Lawrence wrought a good work, who by the sign of the cross gave sight to the blind. Alleluia.

At that time, Jesus said to His disciples: “Amen. amen, I say to you, unless the grain of wheat falling into the ground, die, itself remaineth alone: but if it die, it bringeth forth much fruit. He that loveth his life, shall lose it; and he that hateth his life in this world, keepeth it unto life eternal. If any man minister to Me, let him follow Me; and where I am, there also shall My minister be. If any man minister to Me, him will My Father.”

Praise and beauty are before Him: holiness and majesty are in His sanctuary.

Accept, we beseech Thee, O Lord, the gifts offered Thee, and, by the interceding merits of blessed Lawrence, grant that they may be to as a help unto our salvation. Through our Lord Jesus Christ Thy Son our Lord, Who liveth and reigneth with Thee in the unity of the Holy Ghost, one God Forever and ever.

Commemoratio Ss. Mart. Hippolyti et Cassiani.
Look with favor, O Lord, upon the offerings of Your people on the devout festival of these Saints, and may their witness to Your truth profit for our salvation. Through Jesus Christ, thy Son our Lord, Who liveth and reigneth with thee, in the unity of the Holy Ghost, ever one God, world without end. R. Amen.

If any man minister to me, let him follow Me: and where I am, there also shall My minister be.

Filled with Thy sacred gift, we humbly beseech Thee, O Lord, that what we celebrate with our homage duly given by the intercession of Thy blessed martyr Lawrence, we may also know as an increase of Thy saving grace within us. Through the Lord Jesus Christ, Thy Son, Who liveth and reigneth with Thee in the unity of the Holy Ghost, one God For ever and ever. R. Amen.

Commemoratio Ss. Mart. Hippolyti et Cassiani.
May the eating of Your sacrament save us, O Lord, and make us stand firm in the light of Your truth. Through Jesus Christ, thy Son our Lord, Who liveth and reigneth with thee, in the unity of the Holy Ghost, ever one God, world without end. R. Amen.